During CES 2015 I picked up a Withings Activité Pop; it hasn’t been off my wrist since. It is the anti-smartwatch, and it doesn’t try to do too much. At the other end of the spectrum is the Samsung Gear S; it tries to do it all, and thanks to Sprint, that even means replacing your smartphone! 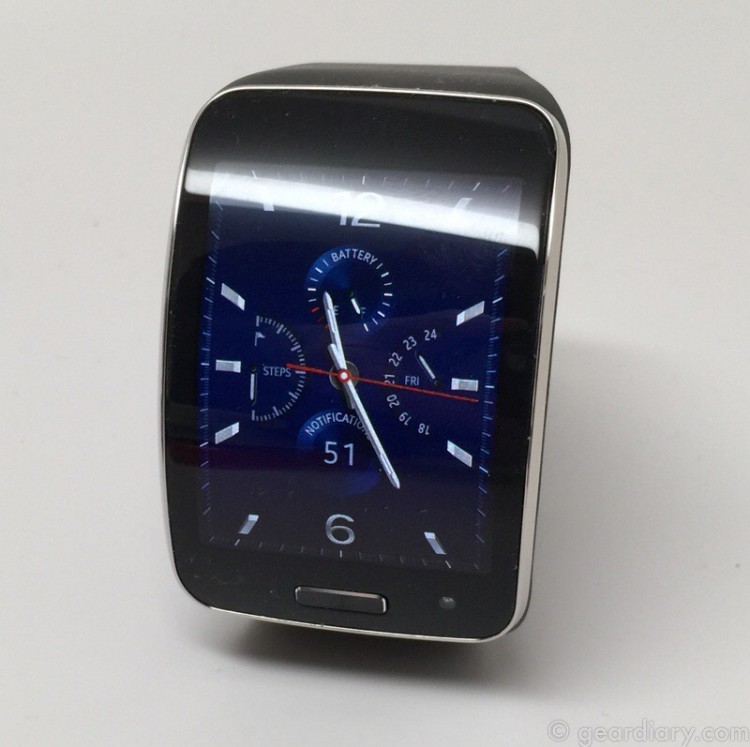 I had been fascinated by the Gear S when it was first announced and appreciated Sprint sending me a loaner unit to try. There are no two ways about it, Samsung Gear S is a large device. If you thought the Moto 360’s 1.56″ screen was large, then you haven’t seen anything The Gear S has a 2″ screen that wraps around your wrist while making a HUGE statement. That’s not necessarily a bad thing, but it does mean that this is, thanks to the large, curved screen, more of a smartbangle than smartwatch. It is definitely something you need to consider when thinking about this watch.

Samsung Gear S designed with an elegant curved Super AMOLED display for a comfortable fit. Customizable screen clock faces and changeable straps helps to express your own style. Enjoy rich views with a beautiful and easy-to-use user interface which allows access to relevant information and notification at ease 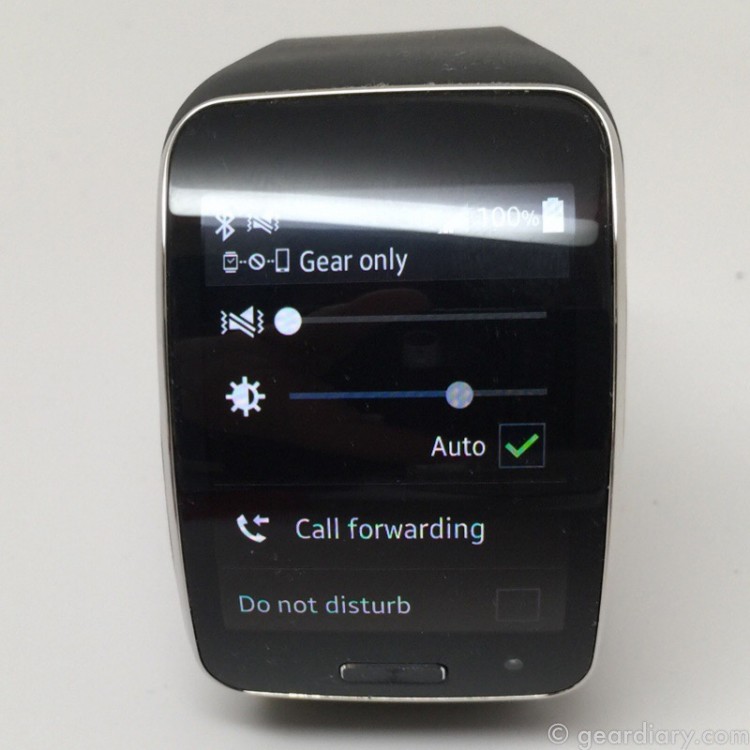 As you can see this smartwatch is loaded. That, in part, explains why this is such a big wearable And, thanks to the network connectivity, you don’t even need a smartphone to get the most from it!

Communicate More Seamlessly: Now with 3G, Wi-fi and Bluetooth connectivity, the Samsung Gear S allows you to make/receive calls and messages even when away from your phone. Instantly send messages using onscreen keyboard, supporting up to 69 languages.

This extra level of connectivity is kind of neat, and it means you can use the Gear S when out for a run or on the go without needing to carry a large, bulky smartphone. In a world where the average size of a smartphone continues to climb, that is a good thing indeed. Still, having a smartwatch that can replace your phone for texts, tracking, browsing and much more may be overkill — or it may be the future. We’ll come back to that in a bit.

Samsung claims that the Gear S was an attempt at, “redefining the idea of the smart wearable.” I’ll agree with that. This is a new idea, and it is one that makes logical sense when one looks at the nascent smartwatch market and what has thus far been attempted. But the question remains, while the Gear S can make calls, (the speakerphone functionality works well and, if you use a Bluetooth headset, the thing rocks), do you really NEED a watch that can make calls? We’ll come back to that in a moment, too. 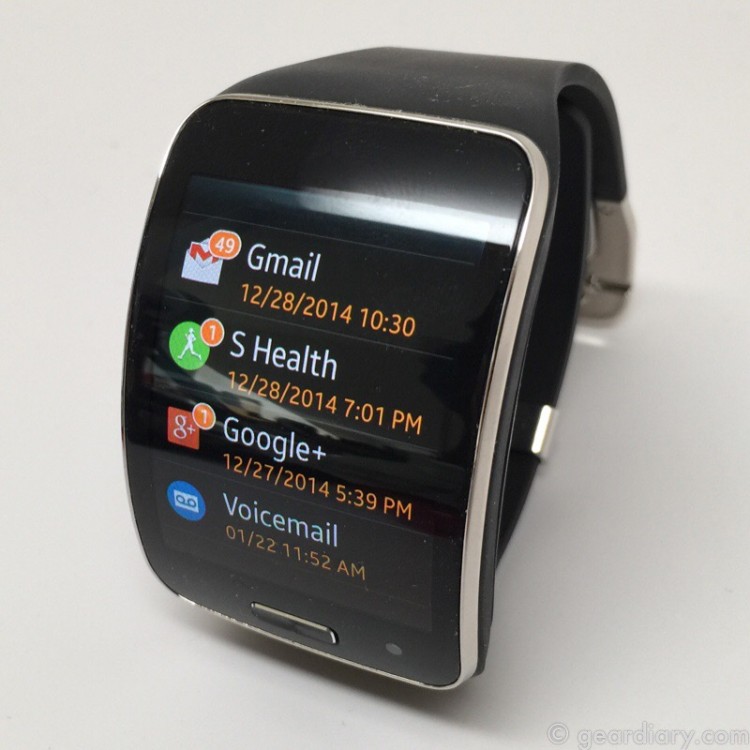 Samsung Gear S allows you to be productive on the go. As we have come to expect with Android Wear, you can add applications, get turn-by-turn navigation, access and use S Voice and much more. You can even use Samsung’s S Health to keep fit.

Your own health coach: Samsung Gear S is a perfect health and fitness companion featuring more enhanced multi-sensors, built in GPS and robust S Health features. Additionally, applications such as Nike+ Running allow users to track their runs and stay motivated while on the move, without their smartphone.

So the Samsung Gear S takes the idea and much of the functionality of Android Wear, swaps in Tizen OS and a cellular radio and blows the screen up for added functionality. And one is let to wonder — Is this the wave of the future?

My short answer is — maybe … but I doubt it.

The Samsung Galaxy Gear S has been out for a while now, and there are a plethora of reviews currently available. Rather than rehashing the specifics and details, the walk-throughs of the hardware and the software, I really want to take a high-level look at who this watch is for, what it represents, and the question of whether or not this is something you might want or whether you should consider purchasing.

When we look at the current smartwatch market we see, at one extreme, those simple devices that are watches but include some degree of monitoring functionality. The Withings Activité Pop is a great example of that. As mentioned in the introduction, it doesn’t try to do more than it needs to do. It doesn’t try to replicate the functionality of a smartphone, nor does it try to be a direct extension of it. Instead, it looks to add functionality that isn’t possible because a smart phone is either too big or not on your person at all times. It’s a simple design, allows for a degree of elegance that is not possible if you are looking to have a complicated interface that does a great deal, and, perhaps best of all, it gets outrageous battery life. With the Activité Pop, you get a much as 8 months per battery. Add in the fact that it is fully waterproof, comfortable to wear, and that it has always-on, easy-to-read analog hands, and you have an impressive product.

In the middle are all of the smart smartwatches. The include Android Wear and the upcoming Apple Watch. These have larger color touch screens, they run apps, and they are specifically designed to be wearable extensions of your smart phone. Because of the color screen, the added processor power and the necessary functionality to make it a smart watch, these tend to have mediocre battery life. In the case of the upcoming Apple watch, the battery life looks to be worse than bad. Still, if somebody is looking to be able to access information from their smart phone or place calls, and they don’t want to be carrying the phone in their hand all the time, this middle ground in the evolving wearables market may be the right place. I don’t believe we have yet seen the design that will become ubiquitous and the gold standard for this type of device, but that may not be too far off.

The Samsung Gear S sits at the other extreme on the continuum from the Withings Activité. More “a smartphone you wear on your wrist” than a smartwatch, this device is the stuff of Dick Tracy. Yes it will allow you to access information and notifications from your smart phone but it also stands on its own. With that you can make phone calls, browse the web, and do pretty much everything you would on a smart phone.that is, of course, assuming you can get used to doing everything on a 2″ screen. 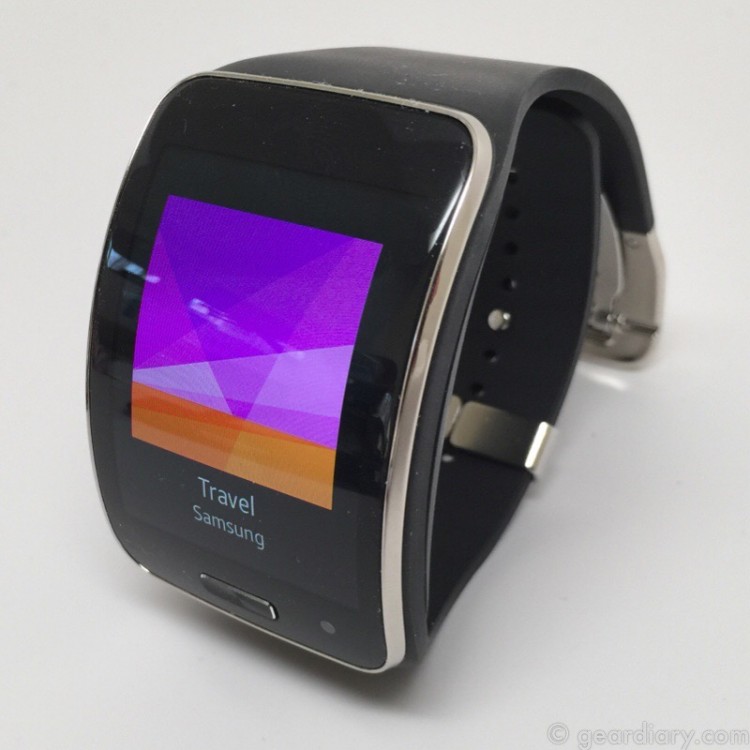 I think there is a good argument to be made for a device like this. Smartphones have become so large that it can be cumbersome to carry them in your hand. With something like the Samsung Gear S you don’t really need to have your smartphone anywhere near you or even on you. There is something rather attractive about that. At the same time, a device like this may simply be overkill. It tries to do so much in such a small package, but I’m really not sure the vast majority of people have any need for this. It’s a fun device and a great proof of concept. It’s the type of device that will make you want to go “wow!”… at least a few times each day. But at the end of the day, I think I would rather have something like a simple watch with a bit of added functionality than something that tries to completely replicate my smartphone experience. I want the great battery life. I want the ease-of-use. And since I do carry my smart phone pretty much everywhere I go, I don’t really need a second smartphone. This is particularly the case since the second smart phone would be so small that it’s difficult to use, The Gear S needs to be charged every day or two; I already need to do that with a smartphone, and I don’t want to have to do that with my watch. It’s for these same reasons that I probably will not be buying the Apple watch when it is released.

So I come back to the question raised by the title of this post — should you want one? Should you by one?

My answer is this — If you hate having your phablet out and in hand all the time, and you love having the latest gadgets, have money to burn, and you don’t mind an additional cellular bill, then YES, you should definitely consider the Gear S.

If, on the other hand, you don’t fulfill any of the previous qualifications, then I’m not sure this is the right solution for you. The Gear S is amazing and impressive, but it is part of a new market that still hasn’t quite found that secret sauce that will make it a success.