Last year I wrote about Keurig’s new version 2.0 K-cup brewer, and how they were including digital rights management like features into it that would prevent owners from using any other K-cup except “approved” ones.  This has been worked around by many, but this free Freedom Clip from Roger’s Coffee has managed to make it easy to defeat this technology. 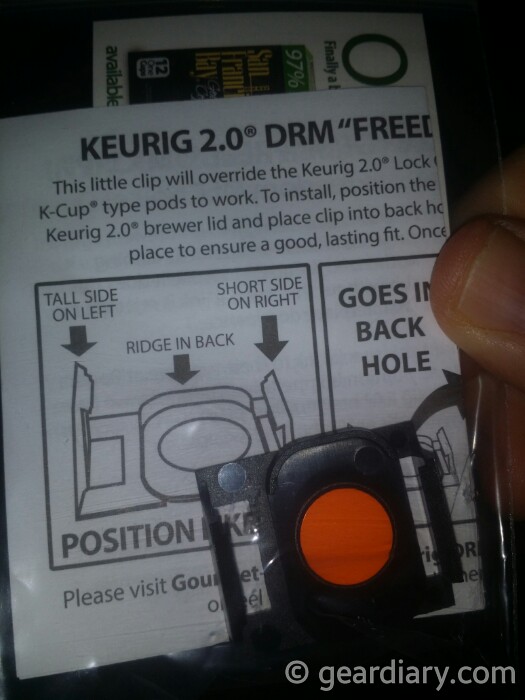 First, a little background: Keurig had a patent on the K-cup design that had expired in 2012.  Up until then, you could only get coffee in the K-cups from Green Mountain Coffee Roasters, who is owned by the same company. Others coffees became available but until 2012, they had to pay Keurig to make K-cups in the same way that companies pay Apple to make approved iPhone accessories. Once the patent expired, a plethora of other vendors made K-cups including store brands. Keurig tried to change this so that they could retain their cash cow — which wasn’t the machines, but the K-cup. They added an ink that is on each approved cup that the machine checks for. If it doesn’t find the ink, it will say that you are using an unapproved or non-compatible cup.

Companies like Roger’s Coffee didn’t like this, as they didn’t want to pay Keurig to become approved.  So what they (and other companies) did was figure a way around this. To that end, Rogers has made the Freedom Clip.  You install this on your new Keurig 2.0 machine, and then you can use ANY K-cup including the Cafe Cup that you can fill with your own coffee.

The best part? Roger’s will give this away to any one who signs up for one.  That’s right.  For free.

Now I don’t have a 2.0 machine yet, but I have the clip now, and so when I do buy the 2.0, I’ll be ready.  Roger’s was smart enough to send some samples of one of their coffees along with the clip — San Francisco Bay Fog Chaser — and I do have to say it’s tasty, and it brewed JUST fine in my K75 Keurig 1.0 machine. Oh and if you buy a box from Roger’s, they will also throw another Freedom Clip in the box.

Of course Engadget just posted that I am not alone in my dislike for Keurig’s new technology.  The company reported much lower sales during the last holiday period, so the word has gotten out.  I think it’s time that Keurig rethinks this concept.  I like the idea of the 2.0 machine because it can also brew full pots, but they’d get more mileage by embracing freedom and making a small design change that gets rid of this tech as it’s ALREADY been defeated. DRM, or CRM (Coffee Rights Management) as I like to call it, is anti-consumer. Just because you have a novel way to produce a single cup of coffee shouldn’t mean you have the right to force the consumer to buy over-priced pods.

It’s not like Keurig was the first attempt at single serve coffee; theirs just happens to be the model that has caught on and become most popular with consumers. I had a Black and Decker coffee machine that I used to use, and Philips invented the Senseo machine that had a similar pod to the Black and Decker unit.  Both of these are now history, and although you can still buy a Senseo, I haven’t seen the pods at the grocery store in ages.  This could happen to Keurig if they insist on being stupid and keep adding limitations to their machines; some other company will come along with a better solution.  People just want decent coffee fast, and they don’t want to deal with a hassle or they will move on.

Do you have a Keurig 2.0 machine? Do you want to drink your favorite coffees without worrying about whether the brews are “approved” by Keurig or not? Get the Roger’s Coffee Freedom Clip, and you can!