A few weeks ago I got my last ‘running streak’ update from TimeHop on my iPhone, meaning two years ago I stopped my running streak after 65 days. I started the streak because right after my last half-marathon of 2012, I took a couple of days off, didn’t have a goal, and I was concerned I would lose my ‘mojo’. 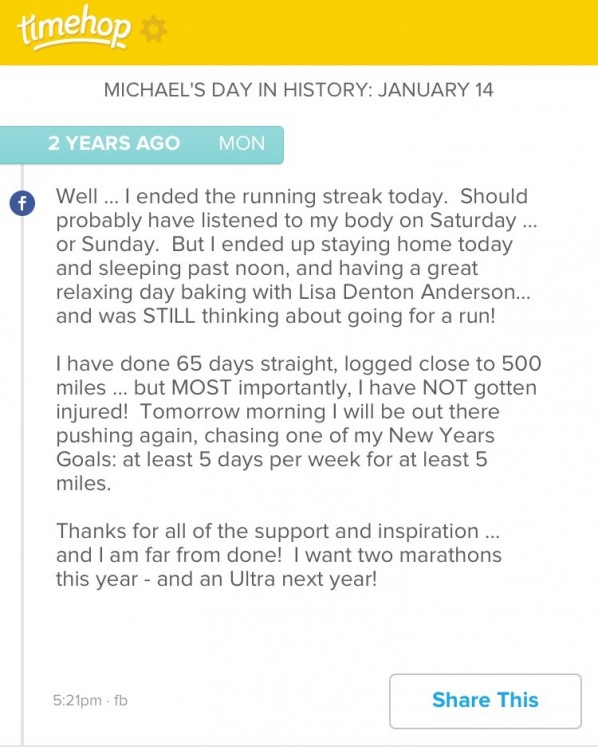 I had seen the Runner’s World Running Streak, which was meant to be 35 days from Thanksgiving through New Years. Rather than waiting for Thanksgiving, I started the second week of November and went more than half-way through January. Here are some of my thoughts looking back:

2. I really CAN run every day

Like so many other things I have attempted, I had no idea if I could do this. Would I get injured, would I get sick, would I just somehow find myself unable to continue? What did I find? Every morning during the week, every day on the weekends, every holiday, every post-holiday … I got up.

Not only did I get up, I got up when the temperature was below zero, when the wind chills were approaching -20F, when I had been up past midnight, when there were stresses or other things that would have easily justified me saying ‘I’m taking today off’. Instead I used it to help me focus, to relax, to meditate, to be present in the moment.

3. Your Motivation Changes when you make this promise.

I remember reading that the irony of the streak is that it is liberating. Committing to this streak is a thing unto itself.

Looking back there was really no question I would succeed – I mean, all I have to do is dip into the willpower (fueled by fear of failure, very likely) that has helped me with weight loss and pursuing and completing multiple marathons.

But still … having a new day dawn and think, I AM running today, just like I ran yesterday and will run tomorrow.

4. Running and Breathing and Form

Everything you are doing wrong is amplified when you don’t rest. When I look at my old blue Nike Free Runs, the bottoms are not uniformly worn … yet the orange Nikes, Saucony and both New Balance shoes are all worn near perfectly. I worked on my form, I worked on doing fartleks and other things, I worked on the ‘running on air’ breathing techniques, and I worked on totally clearing my head some mornings. It is amazing what you can do.

5. There is no such thing as a bad run

Sure there are days when you don’t FEEL like getting out there, when you are out and the pace just won’t cooperate, when the hills feel more punishing, and so on.

6. There is nothing worse than a strong arctic wind

It might seem odd, since I’ve been running for nearly 26 years through pretty much every sort of weather from 90+ heat to -25F chills … but until recent years I never did more than glance at the outdoor thermometer before heading out for my runs. Cold was cold, whatever. When it hit winter I bundled up to varying degrees, but until 2012 I wasn’t running the distances that required that much care.

But running ~7.5 miles every day for 65 days through the middle of winter meant hitting everything – and what I noticed most was the impact of the wind. Some days when temperatures were warming the air might be cold but you were comforted by a ‘warming’ wind. But most times it was cold and the arctic blast just drove right through you … one run I was reading about from last January had me going out in 40F temperatures, but with a very cold 25MPH winds carrying colder temperatures. My remark the next day was I would take the 5F without wind over the previous windy day 100% of the time!

7. When it is done, you will be relieved.

And yet, when it was over, I was glad. I was glad because I knew I was getting sick, and for the previous two days everything else was suffering more than it needed in order for me to keep running.

I was also glad because while it was liberating for a very long time, after the new year it began to be an obligation. It became something I needed to do everyday, and I worried that hyper-focus could become an unhealthy pursuit.

So I went back to my normal 6 days, ~50 miles schedule … which I have kept up ever since and have continued thoroughly enjoying my running. I never had the desire to do the Streak this year – because I had already proven what I needed to myself, and as I’ve noted I was actually doing about 6.5 days per week anyway and had taken just 2 days off out of 40 by mid-December, but not in pursuit of anything, just because that was how my schedule worked.

I remember in early December of 2013 as someone was talking about the progress on their streak, and I went back through my logs and saw that I had run 22 days straight, and 47 of the last 49 days, and 71 of the last 75 days. My goal was 6 days per week, but sometimes I ended up with seven days if Lisa worked all weekend. I was much more aware of my body, took rest days when needed, even if it was the middle of the week, and as a result I paid much less attention to the ‘how many days/miles have I run this week?’ that concerned me before.

That continued through all of 2014, as I had another 3000+ mile year, ran 312 days (including taking 10 days off completely for vacation) and even had several ‘doubles’ scattered around.

But last November I was very clear – no running streaks. No forced every day runs, no required days, no pressure. I already do more than enough – and the concern of possible injury from forcing things outweighs any concern about losing my running mojo.

Have you done a running streak? Are you considering one? If you did one, what did you learn?