You almost certainly won’t like this record. Not only is it modern jazz, it is avant-garde, experimental, dissonant, and difficult. Henry Kaiser is what I would term an ‘easy call’ for the type of music that most people won’t like, so just go away. Still here? OK, keep reading to find out why I LOVE this album. 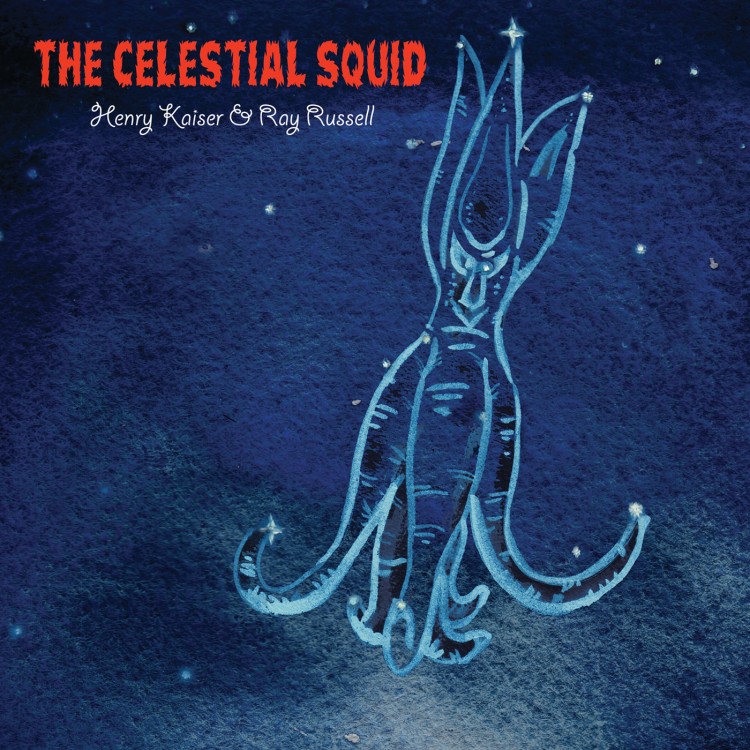 Guitar summits don’t ascend higher than when legendary British free-jazz pioneer and longtime session ace Ray Russell meets the brilliant California avant-improv overachiever and Antarctic diver Henry Kaiser in the realm of The Celestial Squid. With more than countless session and soundtrack performances to his credit, including the early James Bond film scores, Russell is returning to his bone-rattling, noise-rocking roots for the first time since the very early 70s. You’ll be shaken and stirred as Kaiser, Russell and eight super friends deliver a no-holds-barred, free-range sonic cage match.

The easy and immediate comparisons to draw when listening to this album are Ornette’s ‘Free Jazz’, Peter Brötzmann’s Machine Gun, some early 70s Zappa/Mothers stuff and the Agharta/Pangaea recordings by Miles Davis. Dense, complex, free improvisation anchored by a driving rhythm and punctuated by the chirps and fragments from the horns and guitars as the other solos.

I find ‘guitar summit’ a very limiting description for this recording – because to me that sounds like a shredding session rather than a collaborative effort that extends well beyond the two guitars. Listen to the title track or ‘Victims’ or ‘Disinterested Bystander’ and what you will find are guitar-centric sections surrounded by wild saxophone sections and great ensemble interplay.

But don’t get me wrong – the guitar work here is incredible – from the soaring solos on ‘Celecial Squid’ ro the frenetic introduction of ‘Victims’ both Russell and Kaiser deliver the incredible breadth and depth of expression you would expect. If you are looking for wild guitar pyrotechnics, you will not be disappointed.

The swinging shuffle-groove of ‘Disinterested Bystander’ is other-worldy and hypnotic. It is simple and somewhat familiar yet all new. It is laid out behind the beat as if the melody itself was disinterested in even appearing in the song! Yet the passion of the solos and the driving groove of the rhythm section keep you locked and engaged throughout.

Henry Kaiser has had an amazing series of creative releases in recent years that I have thoroughly enjoyed, and this pairing with Ray Russell is a gem that fans of either guitarist should definitely grab – and all other jazz/fusion fans should check out.

‘Quick Hit’ Song: “Celestial Squid” … this sprawling epic song attacks hard, takes you on an unrelenting journey before dropping down for a bit so you need to pay careful attention to the details … then it returns with a vengeance! Like the rest of the album it isn’t immediately clear that the guitars are leaders – in a way it reminds me of some of John Zorn’s Naked City work in the opening section. Then it drops into a solid funk groove with a slowly building set of solos by all involved, with great support from the guitarists. The guitar solos are amongst my favorite on the album, and overall it is the type of song where I learn new things with every listen, and continue to love the recording.

Would I recommend?: Absolutely! It is funny coming from The Kandinsky Effect to this recording, as they are both such great albums yet incredibly different in terms of accesibility. In a way that is a shame, because I think this is an extremely rewarding album. You run the gamut from slow and melodic to fast and harsh, and everyone in the ensemble has the opportunity to shine.

Suggested audience: If you were familiar with and interested in the recordings I mentioned above – Ornette, Brötzmann, Zappa, Miles, Zorn – then chances are you will love this. Because of the harsh dissonance, fragmentel lines, chaotic ensemble sections and general difficulty for most listeners, this recording will have a very limited appeal. Personally … I love it.

There are two ‘pay what you want’ bonus tracks available on Weasel Walter’s BandCamp page!

Here is the EPK video highlighting the album: