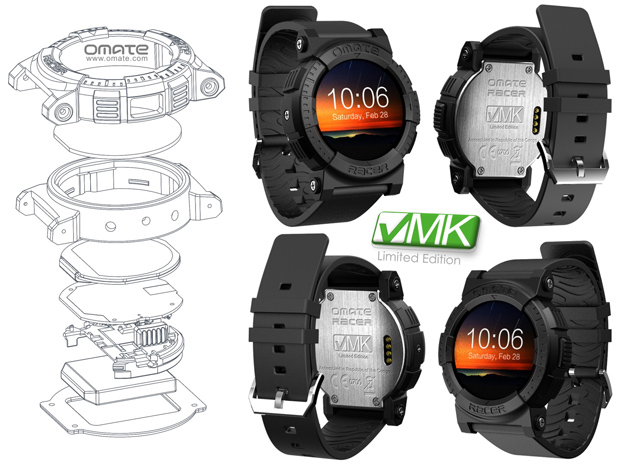 In January, Omate announced their $99 Racer smartwatch with much fanfare. Earlier today, Omate Announced what looks to be a first in a blooming Smartwatch community, with their limited edition Omate Racer X VMK.

It has been announced that the new smartwatch will be heading to Africa in locations in Congo, Ivory Coast, and Cameroon to begin in June of this year for assembly.

Thanks to the Congolese mobile startup company VMK who hopes to become a major player in the mobile industry in Africa, the Omate brand intends to be both cost effective, while giving you all of the things you would expect from a smartwatch. Courtesy of low energy Bluetooth, the smartwatch pushes notifications for Apple devices on iOS7 or newer, as well as Android 4.3 and above.

The battery on the Omate Racer X will last up to 5 days in standby and will support over-the-air updates for things like SMS, email, phone calls, with the ability to link your apps for control, or disable personal apps and system apps via the LinkitDevelopment platform for wearables. There will also be a companion app by Omate which will be in the App Store and Google Play.

CEO Laurent Le Pen expects to sell around 50,000 units in the continent of Africa alone, and by the sheer looks of this smartwatch, coupled by it’s battery versus the competition, I’m pretty sure it will do well in the targeted market when it reaches the states.

The Omate Racer x VMK will be available in the US for $99 in June 2015 via the VMK distribution channels in Africa.