The comedy/satire television show Parks and Recreation shot in ‘mockumentary-style’ aired their final episode after seven seasons on NBC, but fans can get plenty more thanks to streaming media options and home video. This unique fan favorite piled on great comedy and community morals to create some memorable television, which lives on through diehard fans.

On April 9, 2009, viewers got their first viewing of Parks & Recreation in the ‘mockumentary-style’ similar to NBC’s other hit sitcom, The Office. 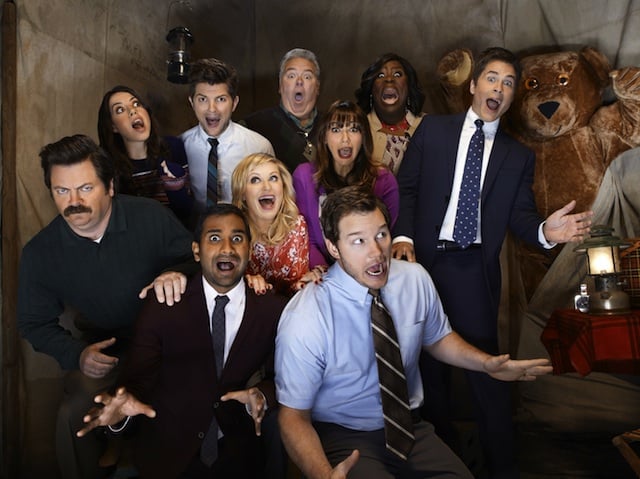 Amy Poehler as Leslie Knope, Rashida Jones as Ann Perkins, Aziz Ansari as Tom Haverford, Nick Offerman as Ron Swanson, Aubrey Plaza as April Ludgate, and Chris Pratt as Andy Dwyer were the base cast members. Paul Schneider as Mark Brendanawicz left in the second season while Adam Scott as Ben Wyatt and Rob Lowe as Chris Traeger joined the cast to solidify this modern comedy troupe with Jim O’Heir and Retta as Jerry (or now Mayor “Gerry”) Gergich and Donna Meagle. Megan Mullally, the real-life wife of Nick Offerman, even got into the act as Ron’s ex-wife Tammy along with several other great stars. This group grew together and individually into stronger entertainers.

Great memories of Leslie’s political planning (e.g. binders) and personal will with Ann’s friendship, Tom’s entrepreneurial ideas, Ron’s numerous quotes (e.g. “I got my first job when I was 9. Worked at a sheet metal factory. In two weeks, I was running the floor. Child labor laws are ruining this country.”), April’s sarcastic quips, Andy’s antics, Ben’s political career…and Cones of Dunshire board game. This show produced great characters and memorable scenes with fun abandon that created deep foundations in TV history.

Audience learned about politics and civics in the town of Pawnee, Indiana that eventually expanded to London, England and Washington DC in the latter seasons.

The TV series ended an amazing run with 125 episodes that included joyful back-to-back episode night for the last 7th season, which will be available on home video on June 2, 2015.

My personal favorite episodes are: