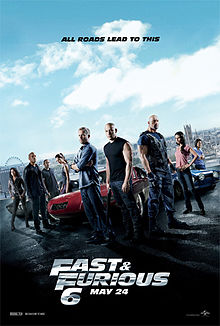 The ‘bigger is better’ filmmaking mantra works as this monstrous action-racing film series keeps upgrading with Fast & Furious 6 (a.k.a. Furious 6). The featured film gear this time is a special device called the “Nightshade”, which can disable power in a large area. Other featured gear in the film include  special electronic discs (relating to the “Nightshade” technology), specially customized F1-style “flip cars”, modified cable guns, BMW M5s, a Navistar MXT truck, a rare 1973 Jensen Interceptor, and a custom-made Dodge Daytona for Vin Diesel…the perfect acting name for this successful film series.

In this sixth film installment, Dominic “Dom” Toretta (Diesel) and his crew work to clear their criminal records, save the world, protect loved ones, and butt some heads. U.S. Diplomatic Security Service (DSS) agent Luke Hobbs, played be Dwayne Johnson, dangles cleared criminal records so Dom and his now well established partner in crime Brian Spindler, played by Paul Walker, get the gang back together to take down a crooked crew let by an ex-military mercenary named Owen Shaw.

Brian has gradually progressed from a budding law enforcement officer infiltrating the underground street racing scene to a capable driver and father to Dom’s first nephew with his sister Mia, again played by the gorgeous Jordana Brewster. Brian’s law enforcement experience comes in handy as the team finds plenty of challenges in Shaw and his team.

The character’s motives are clearly defined, yet they are very similar to several other characters, which can keep the audience guessing about their allegiances with the good or bad side. This wide array of multi-ethnic characters represents the audience very well…so well, I often heard my audience talking back to the screen and agreeing with protagonist characters’ dialogue.

Diesel’s role as Toretta equals the level of his screen presence and magnetic appeal as Toretto’s romantic life shifts back to Letty Ortiz, played by Michelle Rodriguez, who finally gets the prominent role she deserves as after being underused in her role in the first installment.

Letty and the other high-profile female characters show grit, determination, courage and sacrifice instead of just being eye candy though one racing sequence in London prominently features an ogling opportunity.

Director Justin Lin (Better Luck Tomorrow) includes several fast paced sequences with a familiar character array. The camera movements weave as smoothly as the simplistic yet compelling plot as key characters use short dialogue segue among the scene transitions. The editing (completed by three editors) is smooth, yet quick enough to enhance the impact of the visuals.

The visuals have a huge impact as the audience gets a realistic depiction of the vehicles speed, physics and actions. The sound editing, special effects and cinematography add to the high level of entertainment and excitement you get from this film.

A huge share of the film’s success comes from the stunt drivers who produce some of the most spectacular moments ever captured on film. This film alone is enough justification for adding an Oscar category just for stunt work.

The military background of the antagonist Shaw raises the action bar and the danger a bit, but the comic relief and overall tone never tries to jolt huge surprises from the audience, which is unfortunate. There are some surprise twists but the franchise largely relies on the car stunts, shoot outs, brawls, and explosions for the big thrills. Toretto’s extended family-like group and their loyal actions also yield some admirable results. Audiences get close this close-knit group amid the extremely dangerous scenarios.

The high power rock/rap soundtrack includes musical performances from deadmau5, T.I., The Crystal Method, Chainz, and returning star Chris “Ludacris” Bridges. The songs are well placed throughout the film along with the decent musical score by Lucas Vidal.

Veteran viewers of the series will get more out of the film and references. Overall, this highly entertaining film was made for the fans while progressing several characters enough without slowing down the action. Recommended (***) and rated PG-13 for language and violence.

I’m looking forward to the next antagonist (keep watching a bit after the ending credits start) and more character development between Letty and Mia in the seventh installment coming next summer on July 11 with James Wan (Insidious, The Conjuring) taking over as director.