One big trend in gaming recently is the convergence of card-based games and more traditional genres. And beyond that, the trading and collectible card game sub-genres have had considerable crossover lately. Now we have an upcoming game that combines RPG with both CCG and TCG elements to produce an exciting and fun experience that is both accessible and deep! 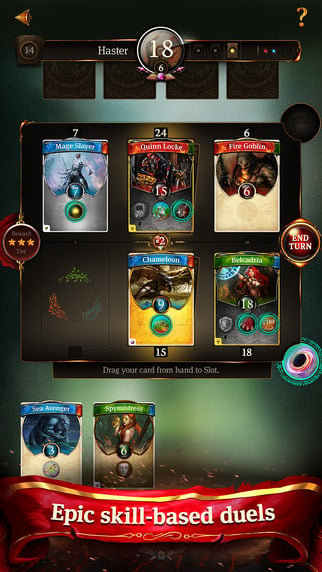 Independent mobile games developer Tequila Games published the first episode of its new five-part behind-the-scenes series of videos “The Making of Earthcore: Shattered Elements”. The videos will be released weekly – starting today with an episode about gameplay mechanics, explained through the perspective of the people and effort that went into its creation. The episode is available on the game’s official YouTube channel:

Earthcore: Shattered Elements innovates the digital card game genre with its unique “Elemental” combat system and by offering Card Crafting to players. Players become designers of their own adventures by fusing cards together and creating over 500,000 unique new cards. The game is set to launch on the App Store in March 2015 and is currently soft launched in Canada and The Netherlands.

“The Making of Earthcore: Shattered Elements” reveals the reasoning behind the creation of Earthcore and expose the issues encountered during the game’s development. Developers confront topics including the potential game design danger of opening Card Crafting to players, how the team avoided clichés in storytelling (and reinstated the dignity of Goblins’ race), why the art director is betting on cinematic special effects, how they choose card illustrations for the game and many more.

The series features contributions from the remarkable board game designer Michal Oracz, creator of Neuroshima Hex, and from Tomasz “Morano” Jedruszek, the digital artist who painted card illustrations for multiple tabletop and digital games including Magic: The Gathering and A Game of Thrones.

“In these videos we want to share our passion for Earthcore: Shattered Elements and discuss in depth the topics surrounding its development process”, said Lukasz Deszczulka, CEO of Tequila Games, adding “In some aspects making a game is like building a structure. We don’t want to make a wooden shack, Earthcore is going to be a cathedral and we hope people will visit it for years to come”.

Earthcore: Shattered Elements will be released for free in March 2015 for iPad and iPhone.

Check out the first video in the series: