Get in high gear at the theaters with the recommended Furious 7 filled with stars, action, thrills, and amazing stuntwork. Paul Walker’s final film role adds to the surprisingly poignant dramatic elements as this seventh installment of the film series

NOTE: There will be no spoilers in this review

This action thriller pulls the throttle all the way open for you with great action sequences with a wide array of characters. Based on magazine article by Ken Li, screenwriters Chris Morgan and Gary Scott Thompson shape a very marketable story with an honorable ending act that has surprisingly effective dramatic moments.

This solid screenwriting duo has already worked on several installments in this series and their work is solid here except for the tiresome slow-motion scenes that ogle and objectify women that are thankfully finished longer before the film’s memorable climax. A huge share of the film’s success comes from the stunt drivers who produce some of the most spectacular moments ever captured on film.

The Furious 7 globetrotting locations include Los Angeles, Tokyo, Azerbaijan, and Abu Dhabi. All of the characters’ motives are clearly defined, yet they are very similar several other characters. Danger is everywhere as veteran horror film director Justin Lin adds in own personal touch like rotating perspective camera shots, especially during the fighting scenes. The editing is smooth yet quick enough to enhance the impact of the visuals. These visuals have a huge impact as the audience gets a realistic depiction of rivalries, heists and fisticuff showdowns. The epic fight matchups pull no punches as audiences get every dream match-up they would expect from the cast.

The camera movements weave as smoothly as the simplistic yet compelling plot as key characters use short dialogue segue among the scene transitions. The editing (completed by four editors) is smooth, yet quick enough to enhance the impact of the visuals. 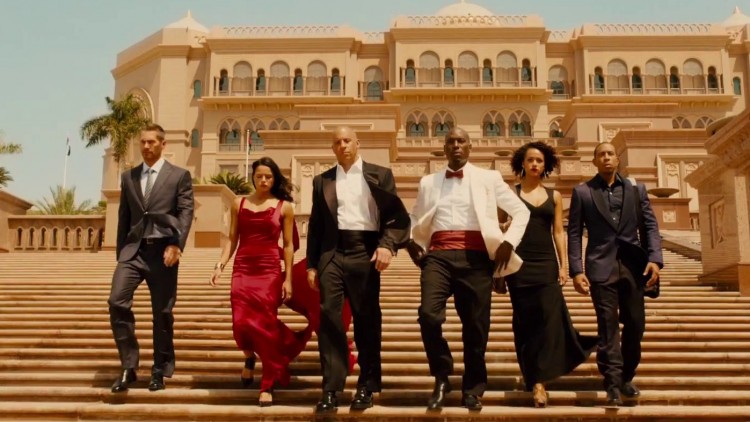 Vin Diesel headlines the cast as the charismatic Dominic “Dom” Toretta with Paul Walker as Brian Spindler in his final film role. Federal agent Luke Hobbs, played by Dwayne Johnson, and secret government agency head Mr. Nobody, played by Kurt Russell, also co-star as they face-off against Deckard Shaw, played by Jason Statham,  a renegade British black-ops agent avenging his brother, ex-military mercenary Owen Shaw, who was the main antagonist in the previous installment. The military background of the antagonist Shaw raises the action bar and the danger. A terrorist named Jakande, played by two-time Oscar nominee Djimon Hounsou, also raises the tension.

Letty, played by Michelle Rodriguez; a severely underused Mia, played by Jordana Brewster; and Ramsey, played by Nathalie Emmanuel in a star making role all headline a solid female cast. Additional members of Dom’s team include Roman, played by Tyrese Gibson, and Tej, played by Chris “Ludacris” Bridges. Other notable returning characters include Elsa Pataky as Elena and Lucas Black as Sean Boswell plus Ronda Rousey, Ali Fazal, and Tony Jaa (in his first English-speaking role) all in short, but key roles.

The featured film gear this time is a special device called the “God’s Eye” plus the amazing cars that include Aston Martins, Dodge muscle cars, Nissan GTR, and the unique W Motors LykN Hypersport (only seven currently exist).

The two-hour and 17-minute Furious 7 is a solid ride that you won’t regret. Still hoping filmmakers will pursue more character development among the female characters (most notably Letty and Mia), but it’s not likely after the character arcs seen in this recommended (*** out of four stars) installment. Rated PG-13 for prolonged frenetic sequences of violence, action and mayhem, suggestive content and brief strong language.