A few years ago my son and his friends were really into the webcomic Homestuck, a quirky adventure created initially in MS Paint that became quite the sensation based on the characters, setting, humor, stories and imaginative variations. Developer Pumpkin Studios captures that feeling in Hiveswap, an upcoming adventure game out this summer. Check out the teaser trailer! 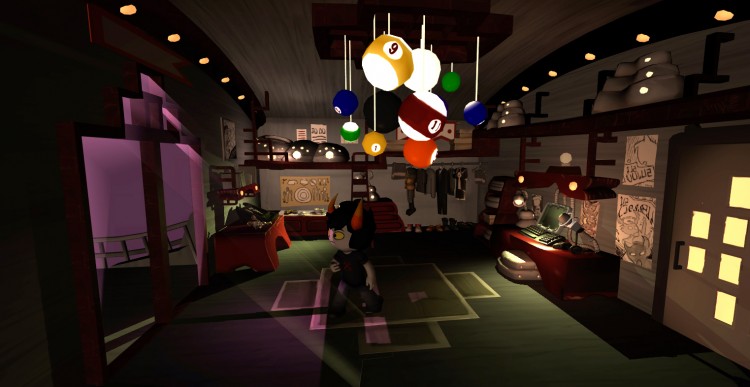 Developed by What Pumpkin Studios in NYC, Hiveswap is infused with the trademark humor of the webcomic Homestuck and features a vibrant cast of characters, puzzle-solving gameplay, and an original story that will captivate Homestuck fans and newcomers alike. Act 1 is slated for release in mid-2015.

Hiveswap is a 4-episode adventure game coming in mid-2015 to PC, Mac, and Linux. When a young girl named Joey Claire discovers a mysterious teleportation machine in her attic, she’s mistakenly sucked through a portal to Alternia, an alien world populated by teenage trolls. Join Joey on a wild adventure with her new troll friends as she looks for a way home and ends up saving the world in the process.

A few of Hiveswap’s cool features:
• Point-and-click gameplay in the spirit of classic adventure games
• Dark comedy storyline rife with video game & pop culture homages
• 5 playable characters who work together to solve puzzles
• 100+ NPCs to interact with — how you treat them changes the story
• The troll equivalent of Twitter to mess around with
• Original soundtrack by James Roach and Toby Fox

Check out the teaser trailer:

This video shows off some of the artwork:

Head to the Hiveswap homepage for more details!