Utah-based smartphone manufacturer Saygus has been working tirelessly on their powerhouse Saygus V2 Android smartphone. “Powerhouse” isn’t said lightly here, as it packs a 2.5 GHz quad-core Snapdragon processor, 3GB RAM, 64GB onboard storage, and two expandable memory ports up to 256GB. After months of anticipation, Saygus is aiming to ship the V2 at the end of May. 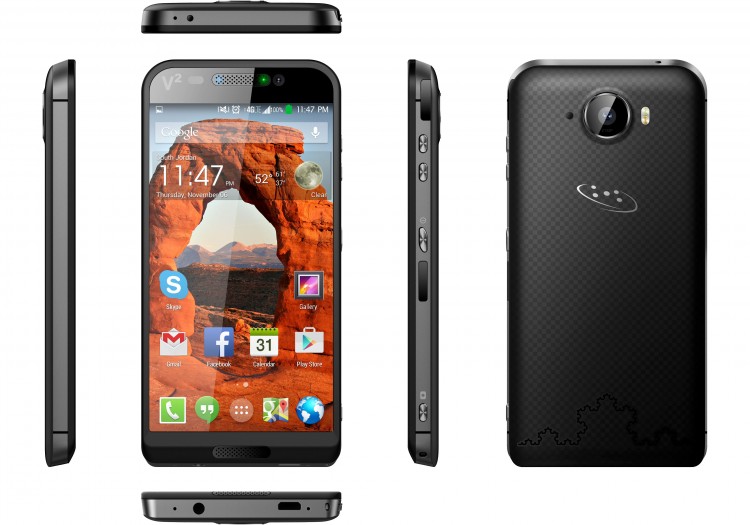 In addition to the quad-core processor, RAM, and onboard storage, the V2 (pronounced V-squared by the way) also has a 21 megapixel rear-facing camera and a 13 megapixel front-facing camera, both with Optical Image Stabilization and auto-focus. The V2 will come pre-loaded with Android KitKat and will be a world phone that’s capable of operating on GSM, CDMA, and LTE networks and should be available on all major US cellular networks by coming “unlocked.”

One of the jaw-dropping features of the Saygus V2 is its 60GHz wireless HD video streaming. This means that you can wirelessly stream your phone’s screen to any TV as long as you have a dongle that supports this feature. Check out the video below for a taste of how this works:

More specs, you ask? The Saygus V2 is packing dual Harmon Kardon speakers to provide HD quality sound, 3 microphones that provide great call quality with noise cancellation, and it will have a 3100 mAh removable battery for extremely long battery life. The phone will be IPX7 rated waterproof, so it will be able to survive accidental submergence in water. The Saygus V2 will also come with root access so you can quickly and easily access the Android operating system’s innards in order to develop or completely customize your phone. And finally, if that’s not enough, the V2 will also support multi-booting, which will allow you to choose to boot from the phone’s internal memory or one of the microSD card slots.

Keep checking with us at Gear Diary for more Saygus V2 information as it comes out. We’re also expecting a review unit once they’re made available to the press, so you’ll definitely want to stay tuned for that!