Just as Apple Watch opened for pre-orders, the Garmin VivoActive arrived in stores and the hands of runners and athletes everywhere. I had written up announcement at CES, so I was thrilled to get one in my hands to play around with. Now after a week, I want to check in with my initial likes and dislikes of the VivoActive. 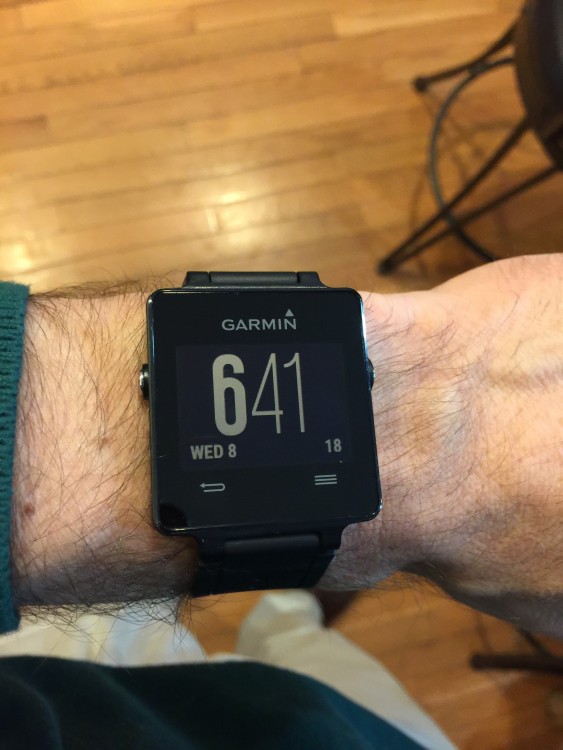 •Ultra-thin GPS smartwatch with a sunlight-readable, high-resolution color touchscreen
•Built-in sports apps, including GPS-enabled running, biking and golfing plus swimming and activity tracking, let you view your stats even when away from your phone
•Pairs with your smartphone to gently vibrate and display alerts for incoming calls, texts, emails and calendar items plus notifications from social media and other mobile apps
•Customize with free watch face designs, widgets and apps from our Connect IQ™ store
•Battery charge lasts through all your activities with up to 3 weeks in watch/activity tracking mode or up to 10 hours using GPS 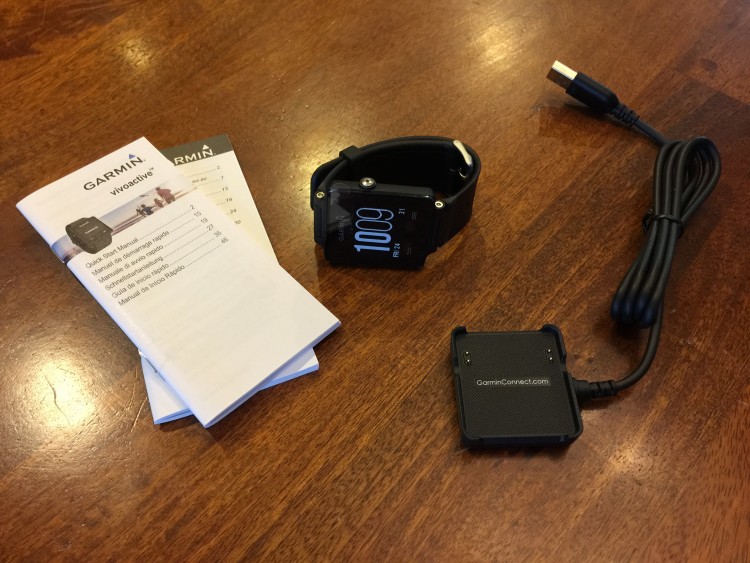 So let’s start with Five Things I Love:
1. True GPS Watch That Disappears on Your Wrist – One issue I have with all of these fitness trackers is that I still need to strap on a different device when I want to track a run. That is one key reason I love the VivoActive – it does everything those other devices do PLUS it has a built-in GPS with 10-hour battery life (better than the ForeRunner 10 or 15!).

And the claims of ‘Ultra-thin’ are true – I stopped wearing a watch years ago, and until last year only used GPS watches for my running. Wearables are sleek and slim, but lack that basic watch-sized display, whereas even the relatively small ForeRunner 15 was too big for me to use all the time as a fitness tracker. The VivoActive is thin, light and very comfortable.

2. Automatic Sleep Tracking – Garmin introduced this in March, and back-integrated it into most of their trackers including my beloved VivoSmart, so it isn’t unique. But I didn’t know about it until last week, so it is new to me! It is as simple as – go to bed, wake up, sync. The graph in Garmin Connect only looks at motion, which is less informative than some other apps, but for me it is always informative about how I slept.

3. Gorgeous Screen – Here’s the thing: I have yet to encounter a scenario where I couldn’t see the screen of the VivoActive clearly and easily. I occasionally use the backlight, but am constantly impressed with the clarity and visibility of the screen and the text on it. The big test for me is the ‘glance check’ – when I am running can I see what is on the watch? How about when I get a notification at work and just want to glance? And in all of my tests so far – including using the backlight to check a notification on my early morning run – the screen is easily readable.

4. Waterproof – Perhaps I am lazy or spoiled since having the Polar Loop and then the Garmin VivoSmart, but for me the ability to just leave my fitness device on my wrist is important to me. But it is something more than that – there is nothing aside from my wedding ring that I wear on my run and to go to work or otherwise out in public. So the ability to wear my sweaty GPS watch into the shower and clean it off and then wear it all day makes a huge difference for me. When I tried using the FR-15 as a fitness tracker, I would take it off after my run and never put it back on.

5. Apps and Widgets for Everything! – Perhaps my praise for the Connect IQ Store is premature, but I have a few apps on my VivoActive already and they change the experience. I thought I would like a traditional analog watch face so I downloaded one, but it wasn’t for me. Then I grabbed ActiFace Blue which features activity history and daily progress and it is much more useful. There are replacements for the built-in weather app and calendars and more … and we’re just getting started! 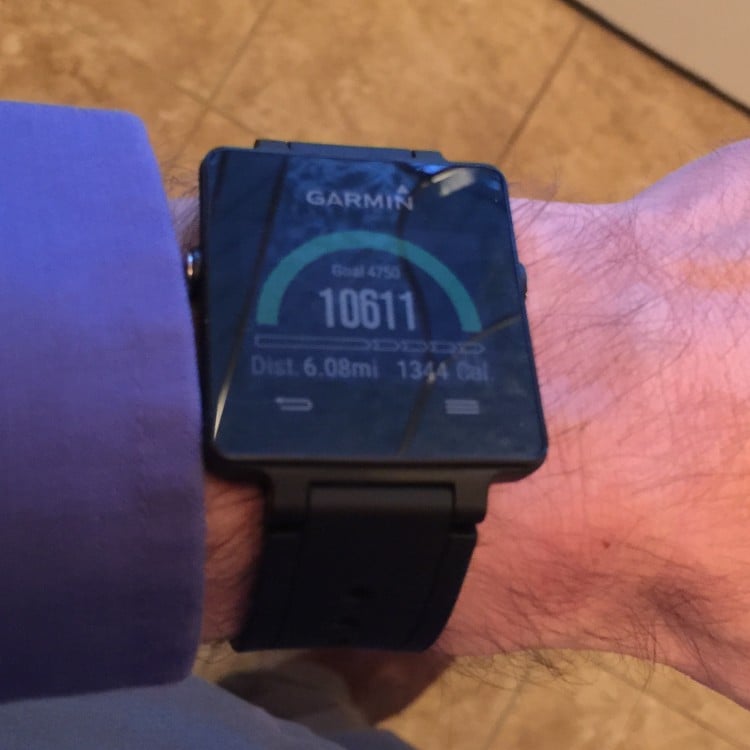 And here are Three Reasons You Might Want to Hold Off Buying:
1. Inconsistent Bluetooth Connection / Sync – One of my biggest issues when I first got the VivoSmart was that it would occasionally just not connect to the phone, not sync or whatever, and I would have to go through a whole re-pairing process. With the VivoActive I saw some of that before the most recent patch, and even this morning I suddenly found that I could sync but wasn’t getting notifications. The fix? Shut down and restart the watch. On the up-side that was the first time I’d done that in four days!

2. Bizarrely Useless Weather App – After my first run I had synced up to my phone and then a little while later as we were all getting ready for school/work I went to check the weather and it said 74 degrees … even though I could check my phone and see that it was 37F and the projected high for the day was 55. So obviously it wasn’t giving the right information. I haven’t had too many problems since the update, but it remains an area of concern.

3. Inconsistent Battery Life – As I waited for my VivoActive to arrive I checked the Garmin Forums and found many complaints about battery life. But the complaints are not singular – there are some who were getting less than 12 hours of battery, others who felt they were losing too much overnight, still others concerned about the balance of usage and so on. While I have few specific complaints about the battery life, one thing I have noticed happening that others attribute to decreased battery life is seeing ‘Phone Disconnected / Phone Connected’ messages even when the devices are next to each other. So this is more of a ‘watch out’ item for me … as you will see below. Also worth noting – Garmin acknowledges that the VivoActive will not currently achieve the “up to 3 weeks in watch/activity tracking mode” claims and are working on an update. 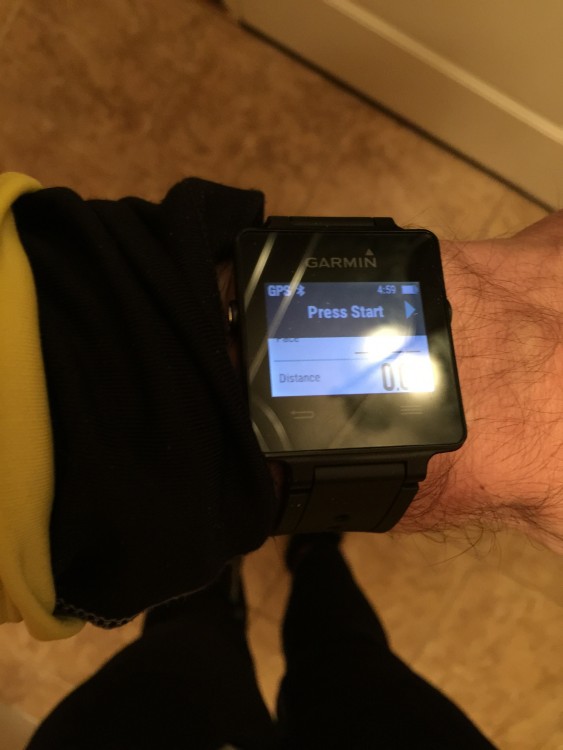 My Conclusions After One Week of Use: 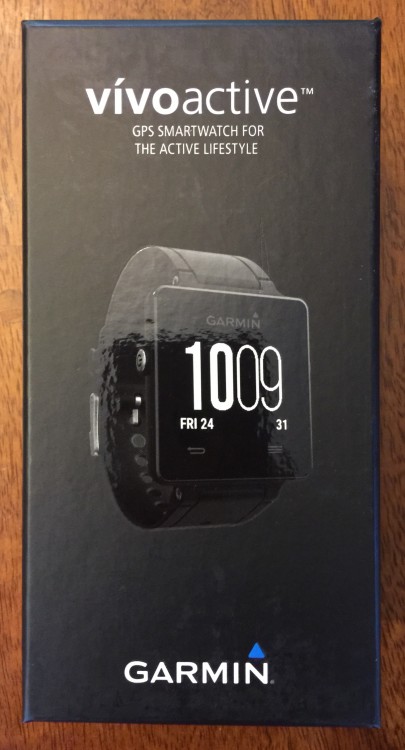 To get more information about the Garmin VivoActive head to the homepage, or head to Amazon and buy it now for $249.99! You can also check stores such as Dick’s Sporting Goods or REI for in-store availability.

What do you think about the current state of smartwatches, and would you consider the Garmin VivoActive smartwatch rather than one of the others?

Check out my video review: