UAG makes one of the most rugged cases for the iPhone, so I was excited when I received two different UAG cases for my iPhone 6 Plus to review.

Urban Armor Gear is a popular accessory company that makes tough yet featherweight cases for smartphones and tablets. I had the option to pick two colors, and I went with clear and the popping color of orange.  The Urban Armor Gear Case is marketed as military-grade protection for your iPhone ,which pretty much means clumsy folks who have a habit of dropping their phones from average text height are safe from damaging their phones. The UAG case for the iPhone 6 and 6 Plus has a nice construction that is made up of a hard outer shell with a soft, impact-resistant inner core. If you are a fan of having a tough case that doesn’t compromise the beauty of your phone, you’d might want to give this one a go. 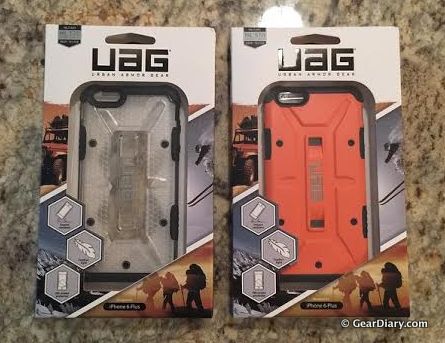 The UAG has good protection around the iPhone screen that is raised a bit to protect from front dropping, which is a necessity for me that I couldn’t get from those bumper like cases. Also the corners of the phone have extra rubber protection as well as on the side that will protect up to about four feet (average text height for some). The back of the phone is completely protected minus two little cutouts on each end of the UAG branding. 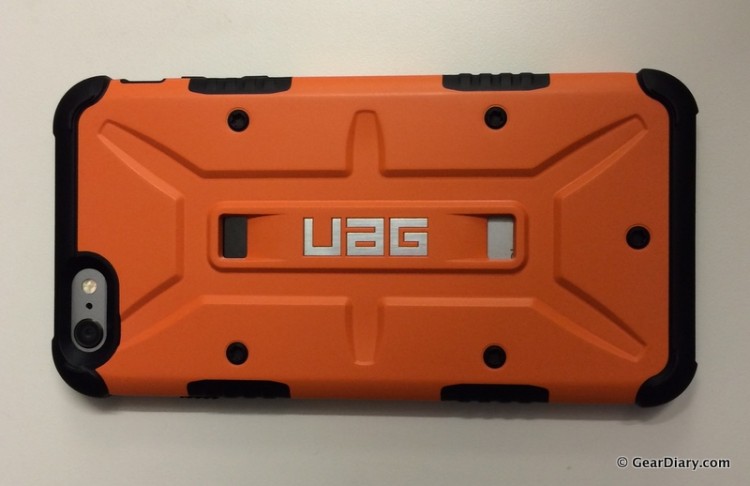 I thought it was a bit odd at first, but I think I figured out WHY they did this. I’ve watched a few YouTube clips of people reviewing the same case, and they actually were disappointed in it. So Saturday when I was on the phone, for some reason my finger ended up in this little groove and it dawned on me, maybe the creator did this nook so when you are holding the phone with one hand, your index finger sits somewhat IN the case. And its the same when you’re on the phone with it up to your ear, for support. I could be wrong, but hey, it’s a nice little feature for me.

The case doesn’t feel like a square brick around my iPhone 6 Plus like Otterbox cases did which I was happy about.  Even though the case meets military drop-test standards, you aren’t compromising the integrity of your phone by extra bulk being traded off for protection. Bonus points for the back of the phone looking like a Despicable Me Minion!! 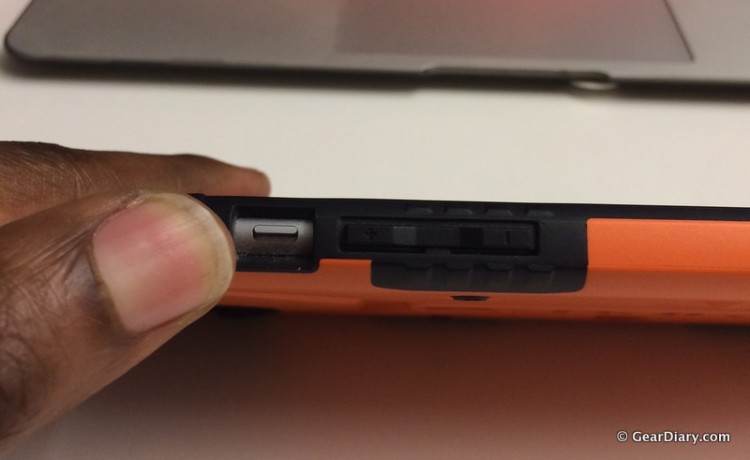 What I was most impressed about is the attention to detail to the cut-outs for the phone. The headphone jack fits every headphone jack I normally try. From Beats By Dre’s L-Shape, to Apples standards, even the extension from Lifeproof’s headphone adapter all worked. As far as the charging port, it’s a bit of the same, wise enough to fit all standard and third-party lightning cables. The open space for the speaker makes it so you can hear all audio coming out of it. The industrial looking (fake) screws on the back were a nice touch, as well as the honeycomb texture. On the orange version you cannot see them because they are in the case, but they are detailed in the clear version of the case, for obvious reasons. 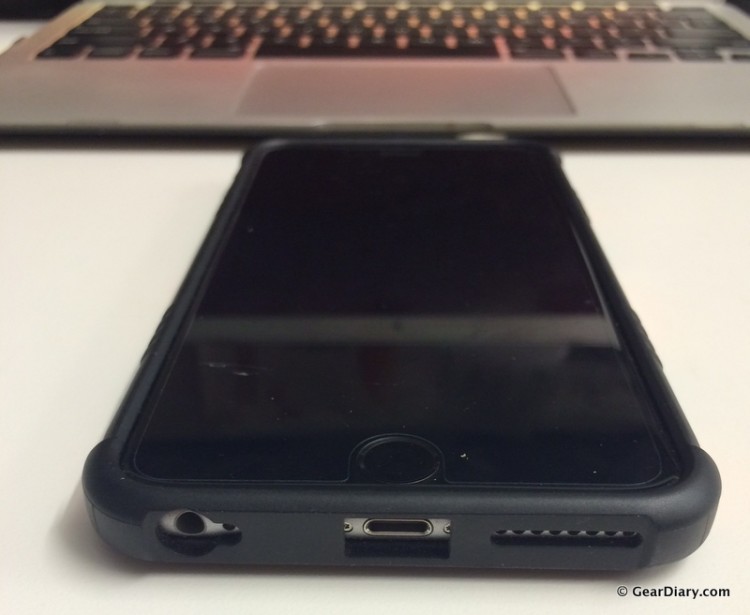 But the BEST thing that I like to see on iPhone cases are the actual volume indicators on the side buttons. The UAG adds a “+” and “–” to their buttons which although it doesn’t matter to some, is aesthetically pleasing to me. None of the buttons were too hard to press, and were rather easy to click. The reason behind this is because each button has a narrow gap between them, which if you’re looking closely you can SEE the phone, but not enough space is given to scratch it at all. There were reports the case is slippery in the hand, and I can see that being the case if you are in landscape, but the rubber grips on the side did me just fine, even with light gameplay.

Priced at $34.95, and available in six colors (that I figured out all have a meaning): Aero (navy), Maverick (clear), Navigator (white), Outland (orange), Scout (black), and Valkyrie (pink). I could honestly say if you’ve had a Speck Candyshell, but wanted your scratches to be less noticeable, with a better constructed case that is slicker and thinner, you should go with the UAG Case. purchase it today from their site.

What I like: Attention to detail on the entire case, included the “+” & “-“ symbols; Wide gap for 3rd-party chargers

What Could Be Improved: A bit more space for the volume rocker