You’ve read a few articles we’ve written about the Alcatel OneTouch Idol 3, but we finally have a hands-on sample to review and enjoy.

Alcatel’s flagship phone is a beauty. I received it at my doorstep about a week ago to the day, and I’ve had the pleasure of using a T-Mobile SIM card, and I’m super excited about it. 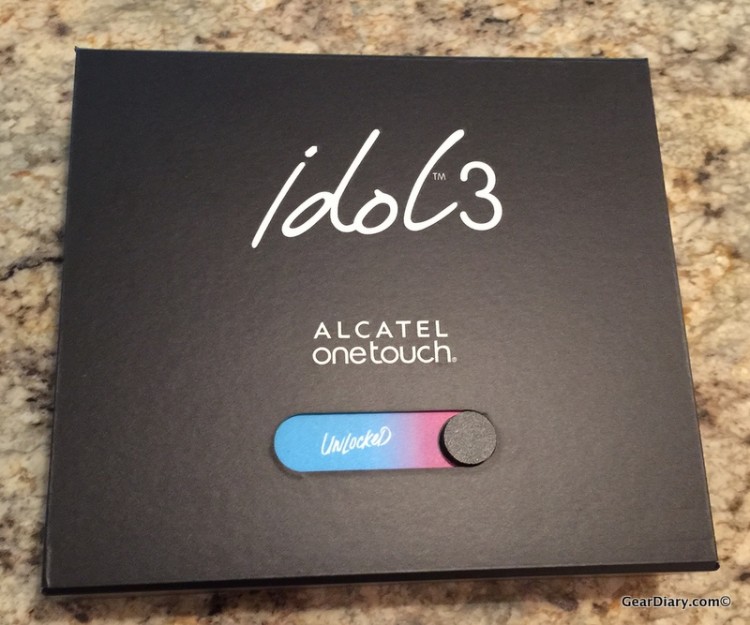 First let’s start with the unboxing of it. Now let me be the first to tell you that this box is a press kit and it’s not the exact one you’ll get if you’ve pre-ordered the device. But regardless it’s pretty damn beautiful. From the mechanical makeshift “slide-to-unlock” lever to the magnetic flap that opens to a multilayered section that describes particular features of the Idol 3, the package is a beauty. Don’t worry, I’ve included photos. 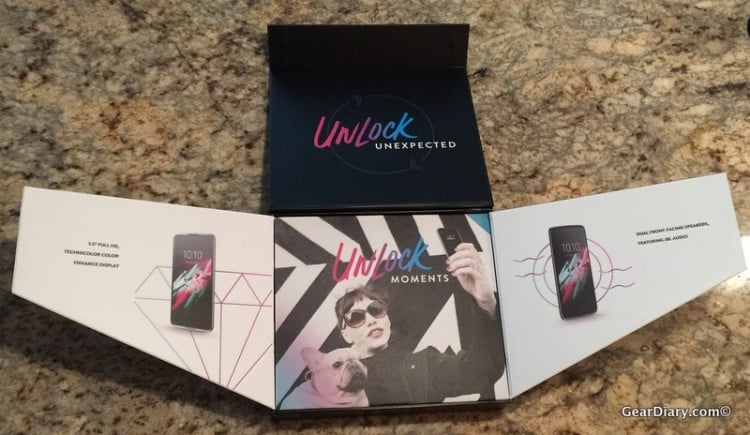 After finally unraveling the box, you get down to the phone. I have the 5.5-inch model which in the hand feels great. Felt a bit better in my hand (better meaning lighter) than the Galaxy 6 I had the opportunity to hold at my local Verizon store. Compared to my iPhone 6 Plus the 6+ is a bit wider to the touch, but I take into account the iPhone is only a hair different in height as well as size from the Idol 3. The Idol 3’s 5.5-inch HD display also comes with an 8mp front camera to compete with the 13mp back camera which we’ll get into a bit later. Since this phone can be answered upside down, it’s nice to mention that the twin front dual 2.1 watt JBL speakers work beautifully with the few calls that I’ve made from it. 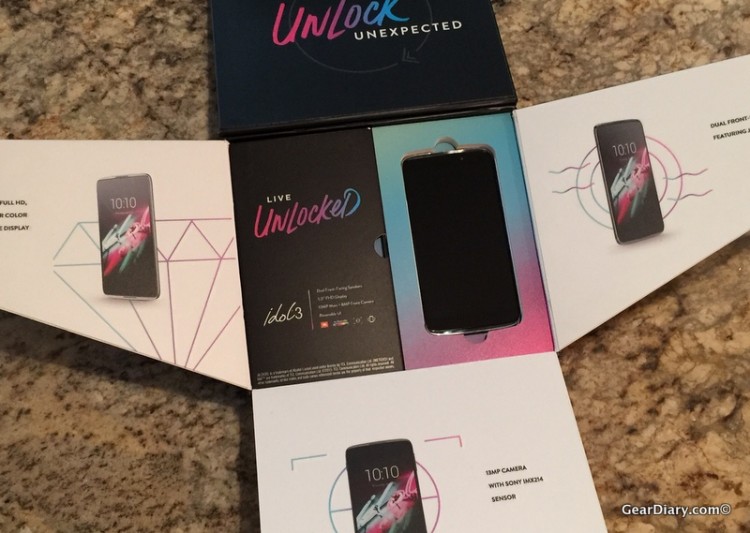 In the box you receive obviously the OneTouch Idol 3, a press kit USB which I liked a lot, a sim ejector, an Alcatel adapter, and a microUSB 2.0 cable. But what stood out to me is the fact they included some beautiful JBL headphones which I will say are pretty stylish, and I appreciate them adding instead of selling separately.

When the Idol 3 went on Preorder at $249.99 (which ended last Monday after being priced at $199) I had a few friends ask me on Twitter about the device itself. I didn’t want to spoil the surprise to I told them to just wait until this article came out.

One thing I was super excited about is the fact that the Idol 3 came fully charged out of the box. The snappy animations courtesy of Android OS 5.02 (which comes preinstalled) were epic as well. I’ve been under the Android umbrella for so long I appreciated holding a new Android device so much more thanks to this device. (My last Android device was an HTC Thunderbolt which was ahead of it’s time but NOTHING like this.) 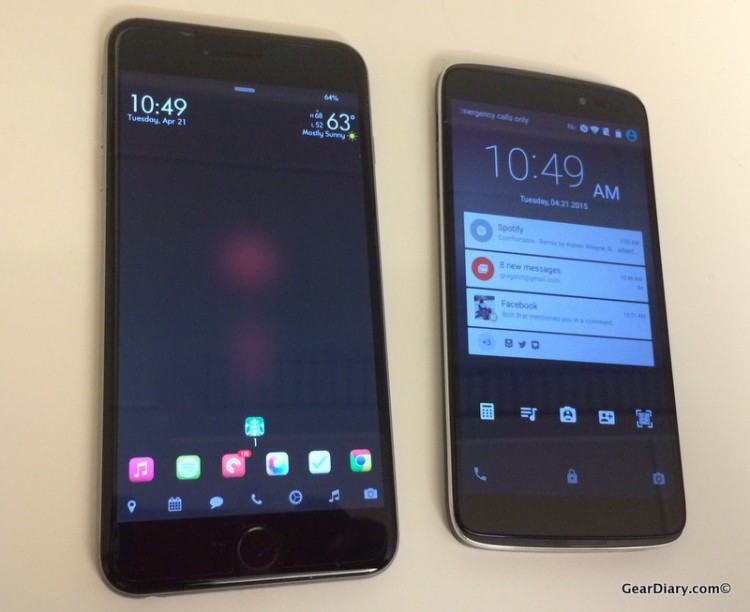 I’ll admit… the first thing I tested out was the camera. (Well, my girlfriend did. She also chose the password to the device, go figure). On initial bouts the camera came up in about 2.7 seconds according to my timer. To some that might be a lot of time, but factor in it’s the first time. The front facing was clear for a budget Android device, but compared to obviously an iPhone or like with better specs, you essentially get “more” than what you paid for. Compared to the m9 I played around with, it even came up a bit faster. Taking photos was super snappy as well.

Recording videos came out pretty good, but the lack of on screen things like the ability to see your zoom kind of hindered me from using this as much as I should. After a few more days, I’m sure I’ll do a bit better at it.

One thing I’ve always envied about Android is the fact they had an indicator light. The subtle blue light on the top right is excellent. Sure you can get this from another Android device, but the look of the Idol 3 from it’s satin-like backing to the front literally going edge to edge made things look nice, even down to the indicator light. The Android seems to have matured so much since the last time I’ve checked them out.

I did however have a problem with the side buttons. Having the power button on the upper right and the volume on the left was different to say the least. That and the fact that you can’t double tap to sleep the lock screen up like you can on those higher end models sucks, but you know, you can’t have it all right? (I want it all. Onetouch 4?)

But what has stood out in the past seven days is the battery. The closed in 2910mAH battery (non removable) is just excellent. Alcatel says this will get you about 13 hour talk time and over 600 hours of standby which sounds like plenty for a moderate phone user. Honestly, I didn’t even bother charging my phone Sunday night and I’m at 78%. The last time I charged it was Saturday night before going out to dinner and it’s held up. I like that. It actually competes with the battery life promised from Apple’s iPhone 6.

Now, Android Lollipop. I could speak volumes of how great this OS is. The last Android system I remember is Gingerbread, so honestly, Lollipop is great. It’s just fluid, man. Now before you say ‘Ah Greg you haven’t experienced Android in a few years’, let me say that’s what makes it so great. Being so used to Apple iOS8, I’m literally spoiled by Android 5.0. From the updated widgets, being able to say “ok Google” (without being plugged in, Siri) Lollipop is the most functional update yet. And for a phone like the OneTouch Idol 3 to run it so smoothly is worth noting. This phone is NOT a joke.

The stock icons left a bit to be desired, as they looked a bit childish to me, but hey, someone will love it, and for me, it’s not really a big deal. The lock screens icons and the ability to “touch again” to open particular things was pretty cool, and something “the other guys” overlook too much.

Now the SPEAKERS! The second app that I downloaded was Spotify. I logged in, and synced my playlist and turned it up to the highest volume possible. I figure JBL has a great reputation of creating lasting speakers, and this is no different. The bass was great for music, and I could hear lyrics perfectly without the speakers sounding like they were overcompensating for my volume preference. Also the fact that the speakers completely rotate regardless of what orientation the phone is in plays a role in speakerphone calls as well because the quality is pretty good.

The weight of the phone is great, especially when you rotate it because the weight distribution doesn’t change due to the fact it’s so lightweight. Overall based off of first impressions and a weeks worth of use, the OneTouch is right for price, and Alcatel now has my attention. I still would like to test this out for a bit longer for a FULL review in the future, but right now, this phone gets a yes from me. That being said…

If you can’t afford the Samsung Galaxy or simply want a phone that works straight out of the box without having to take a course on how to use it, this is the one to attempt to get today.