Boombotix’s Boombot Pro is the latest in a growing group of pocket bluetooth speakers available out on the market. Not only is the speaker made to be used on the go, but you can certainly use it while in your home.

The speaker itself can last up to six hours on a single charge, with up to fourteen hours on standby. Compatible with most macs and PC’s as well as Apple and Android products, the Boombot Pro that I received came in a grey color way with a chrome border on the speaker grill. If you’ve ever used the Boombot Rex, or read our review of it that Perry did last year, you’ll be excited to know that this years model actually is a slight upgrade from that, while keeping all of the things that you love about it. 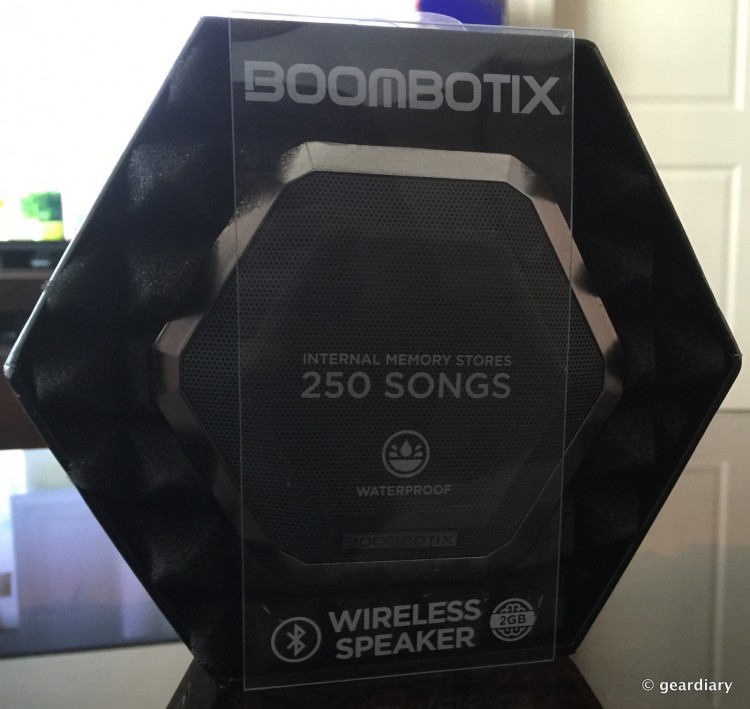 One of the biggest complaints online about the Rex was that it lacked enough bass to be worth the $90 asking price. Well I can confirm to you that Boombotix fixed this in a major way with the Pro. While the price if still just below $100 at $99.55 this is certainly a speaker that is not cheap.

Pretty much everything stays the same cosmetically with the Boombot Pro, from the clip on the back with Boombotix’s signature logo, down to the dual amp stereos that sit underneath the mesh grill on the Pro. Included in box you get the typical USB cable to charge, the signature padding around the speaker itself, instruction manual, and a cool decal that you can put on your Macbook or fridge if you deem fit. One thing that they did however leave out though is the extra cable you could use to plug up your phone directly into the speaker in case you decide not to use bluetooth. 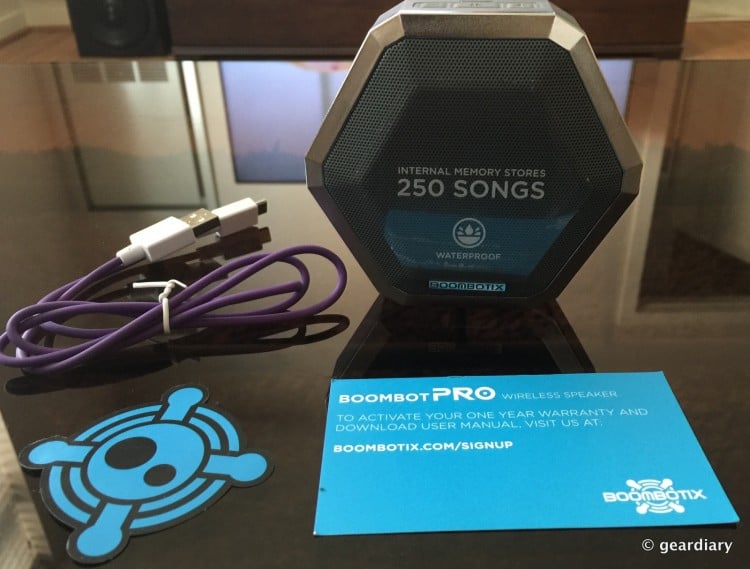 Also a welcomed change in the update is the power is actually separate from the other three buttons this year. The play button as well as the volume rockers do make it back to the top of the device though, no worries there. I did find the power button’s icon to be hilarious however. It’s flag like shape was unique and original which easily sets it apart from a lot of the others on the market. Only wish is I would’ve liked if they had kept the industrial look with the faux screws around the Pro. 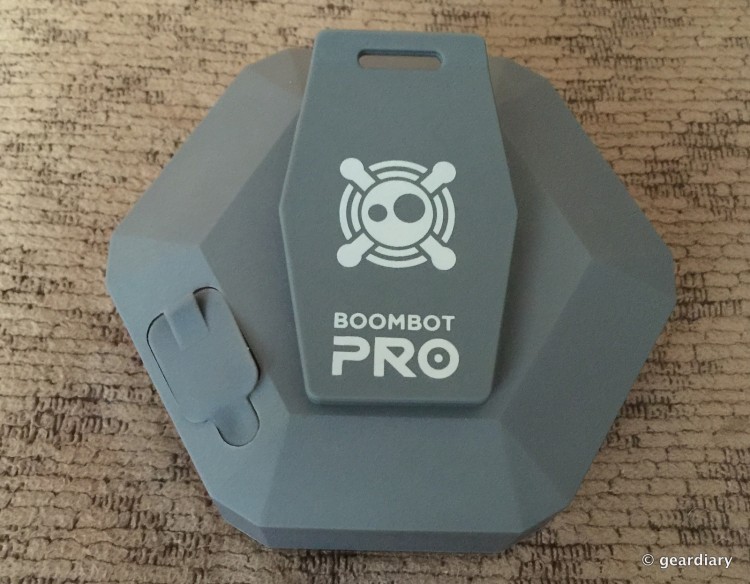 Its octagon shape is actually pretty cool, and to me it looks better to hold than the typical rounded or square speakers on the market, but one thing I look for in my speakers are how they’ll handle water. And the Boombot Pro does that up to three meters for up to thirty minutes. I’m of the mindset any speaker that’s this size should be waterproof. Just look at the size along: 4.1 by 1.9 by 3.7, the Pro easily knocks off the competition just in the waterproof category. I’ve run into a few “water resistant” cases, and trust me, there’s a huge difference. 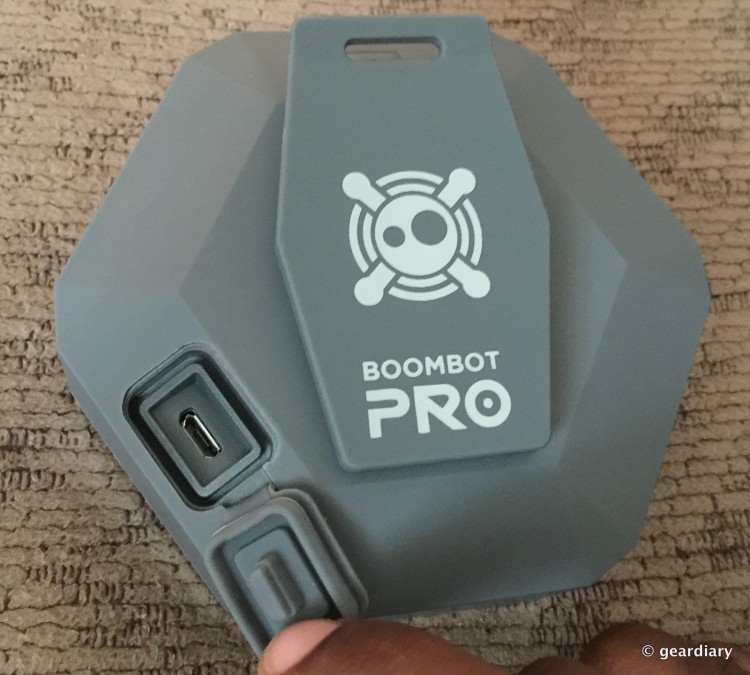 The bread and butter to the Boombot Pro this go-around however is not in the cosmetics, but in the internal memory. Substituting the auxiliary cord for 2 gigabytes of storage into the speakers itself, was actually the best decision Boombotix made. So now when you’re on your bike rides, instead of having to pull out your phone and change songs, your favorite 250 songs are not on the speakers internal memory. Now, 250 is an estimated number, but if you’re like me, you might have a couple of songs that are 7 or 8 minutes long, which could prove Boombotix’s estimate to be inaccurate, but then again, do you really listen to 250 songs these days? If you do, there’s always your phone. 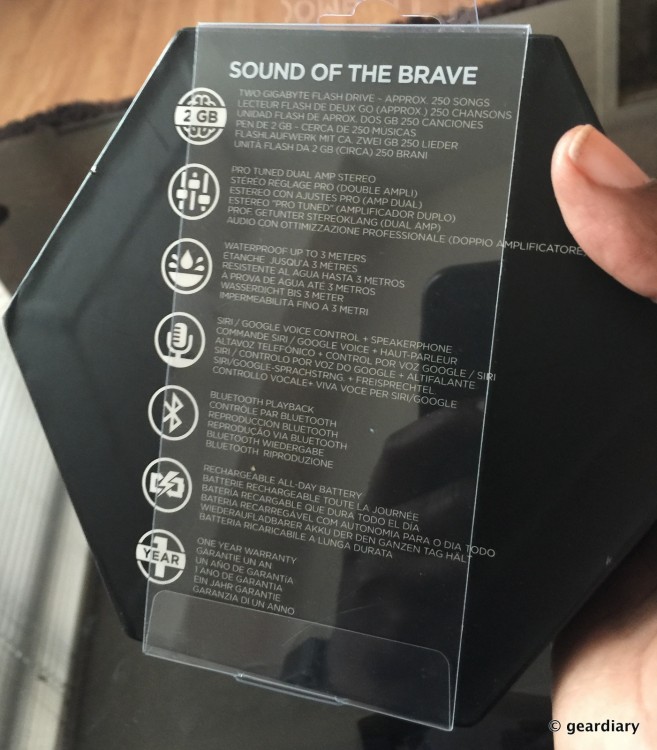 If I had to find one thing that I dislike about the Boombotix pro, it would be the actual chrome accent on the grill. Obviously it’s not real “chrome”, so to speak, but it does chip really easily, which is more noticeable in the “Battleship Gray” version I received. Other than that though, Boombotix can only go up from here. While there should be a less “typical” color option (in maybe a red or even a purple), this is a great gift for that dad who loves to hike or bike, or even that student who walks to school in a couple of weeks and doesn’t like headphones!

Get a Boombot Pro by Boombotix today.

What I Like: Internal memory is GREAT for those long walks and bike rides when you don’t want to kill your phone using bluetooth

What Needs Improvement: Battery life being only 6 hours isn’t quite good enough to justify the price