This post brought to you by Parrot. The content and opinions expressed below are that of Gear Diary.

I recently had the chance to check out one of the new Parrot MiniDrones. There thirteen “ultra-technological connected robots” in the Parrot MiniDrone lineup and each has something special to offer.

These new and updated mini-drones are designed for serious play and ready for action whether you want your fun on the ground, in the air and/or on the water! 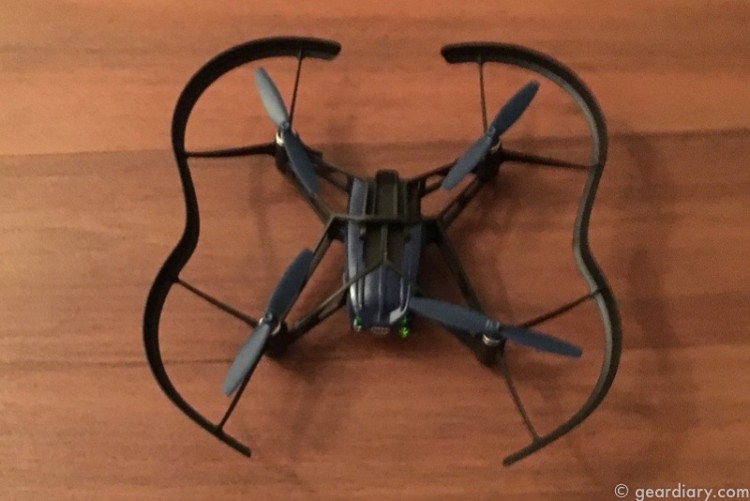 Let’s run down the various offerings and then look at the one I chose and why.

First up are the Jumping Drones

The ‘Jumping’ are smart terrestrial robots piloted in Wi-Fi 2.4 or 5 Ghz via the FreeFlight 3 application. Each is equipped with a wide-angle camera that streams live, immersive views on the screen of the piloting smartphone or tablet. They take pictures and videos which are directly stored on the internal 4GB flash memory. They feature:

The $189 Jumping ‘Night’ MiniDrones including the Diesel, the Buzz, and the Marshall

The Jumping Night can see in the dark. You just have to activate their powerful LED lights from the FreeFlight 3 application and adjust the intensity. They can also send light signals to indicate that the coast is clear or to give notice of danger. They can patrol and take complete video reports, even in dark areas, have a maximum speed of 4 mph, can jump up to 2.5 ft. (height & length) and have a battery life of 20 minutes. With fast charging, you can be ready to start playing again after only 25 minutes when using a 2.6A charger. (not included)

The $189 Jumping ‘Race’ MiniDrone includes the Max, the Tuk-Tuk and the Jett.

The Jumping ‘Race’, true racing cars capable of quick acceleration with 8 mph bursts of speed! Equipped with a powerful engine and large wheels for perfect traction, the Jumping Race reaches up to 6 mph thanks to “boost” mode which is enacted through the FreeFlight 3 app.

They have two large retractable wheels that adapt to all driving styles. With the wheels open you get greater stability in high-speed, ideal on smooth roads. With the wheels compact, you can increase agility and drive through narrow areas. These drones have a maximum speed of 8 mph, jump up to 2.5 ft. (height & length) and run for 20 minutes after a fast charge of 25 minutes.

Next up are the Airborne Drones

These flying acrobatic robots are ultra-compact and lightweight. The Parrot ‘Airborne’ are flying robots that connect via Bluetooth® Smart and the free FreeFlight 3 app for smartphones and tablets.

The Airborne ‘Night’ line includes the Blaze, the Swat, and the Maclane.

They are easy to use and safe both indoors and outdoors since they are equipped with a removable polyamide hull to protect the propellers.

Full of sensors: The Parrot ‘Airborne’ have remarkable flight stability and utilize technologies usually dedicated to larger drones: A 3-axis accelerometer and a 3-axis gyroscope measure and analyze each movement or inclination of the drone and, thanks to the autopilot, rectify the position of the MiniDrone. A vertical camera compares, every 16 milliseconds, an image of the ground to the previous one to determine the speed of the MiniDrone. It also enables the MiniDrone to take snapshots, which are saved on the 1 GB flash memory. Perfect for aerial “selfies.” An ultrasound sensor analyzes the flight altitude up to 13 ft. Beyond, a pressure sensor controls the MiniDrone in altitude.

Aces of acrobatics: The ‘Airborne’ can do high-speed flights: they rush up to 11 mph, turn right, turn left and perform flips with amazing fluidity and stability. A ‘swipe’ on the piloting screen and the Parrot ‘Airborne’ turn 90 or 180 degrees in a flash.

They are always on alert: You can toss them into the air and their sensors detect it instantaneously: engines start automatically and the ‘Airborne’ stabilize in the air!

Powerful lights: Thanks to their powerful white LED lights activated from the FreeFlight 3 app, theAirborne Night can explore even in the shadows of darkness.

During night patrols, you can modify the intensity of their headlights and, same as for their terrestrial counterpart, you can send signals with flashing lights! They can explore areas that are dim and only accessible by air.

These drones have a maximum speed of 11 mph, run for 9 minutes without the hull and feature fast charging in 25 minutes when you use a 2.6A charger

The Airborne ‘Cargo’ includes the Travis and the Mars.

These transport drones are capable of carrying a toy pilot or any kind of miniature freight, like toy blocks. This ability to customize what is on the drone opens up options never before seen for unique adventures. These drones have a maximum speed of 11 mph, get 9 minutes of flight time without hull and charge in 25 minutes. These have an MSRP of $99.00.

The Hydrofoils come as the Orak and the Newz

These hybrid robots will go on water and air since these flying MiniDrones come with a hydrofoil attachment that lets them glide over water just as they sail through the air. When used in hydrofoil mode the drones rise out of the water, hover over the surface and move like racers in a sailing match. As Parrot explains, “Once the engines are on, the upper part of the Hydrofoil positions perpendicularly to the nautical structure. Thanks to the four propellers of the MiniDrone, it slides through the water and stays about 2 inches above the surface with amazing stability and agility. As the water resistance is reduced, it can reach the maximum speed of 5.4 knots (6 mph) and turn in a flash without capsizing.”

And while this line of mini-drones has a special water feature they come equipped with all the same capabilities as the ‘Airborne’ drones. That means the Hydrofoils can be separated from the flying portion and the drones can take to the air. They have a maximum speed of 11mph in the air and 6 mph (5.4 knots) on water. They get about 7 minutes of run time.

Each of these mini-drones can be purchased online on the official Parrot site or, like me, you can check out your local Target and pick one up so you can have instant drone-satisfaction. 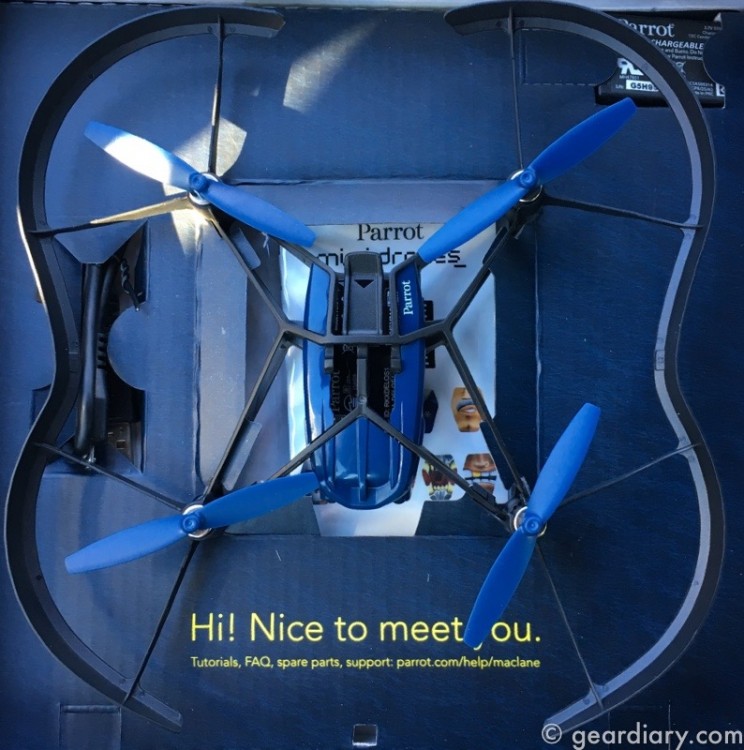 I opted for the Parrot MiniDrone Maclane Airborne Night Drone. I liked the night feature thanks to the bright lights and appreciated the sleekness of the drone. For me, this seemed like the purest of the mini-drones since it was and is designed simply for flight. The lights mean it will fly at night but, regardless, this is all about getting your drone in the air and having some fun. And fun I had!!! 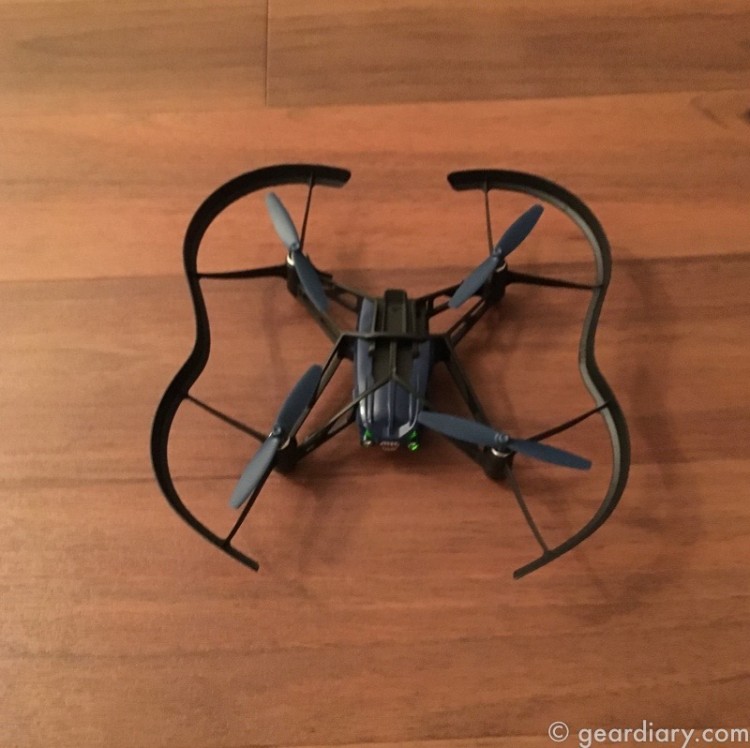 My first foray into droner-ville didn’t go so well. The drone fired up, lifted and, within seconds crashed to the ground. There was no damage… These things are pretty tough, but my ego was a bit bruised. I read the instruction, watched a video and tried again. 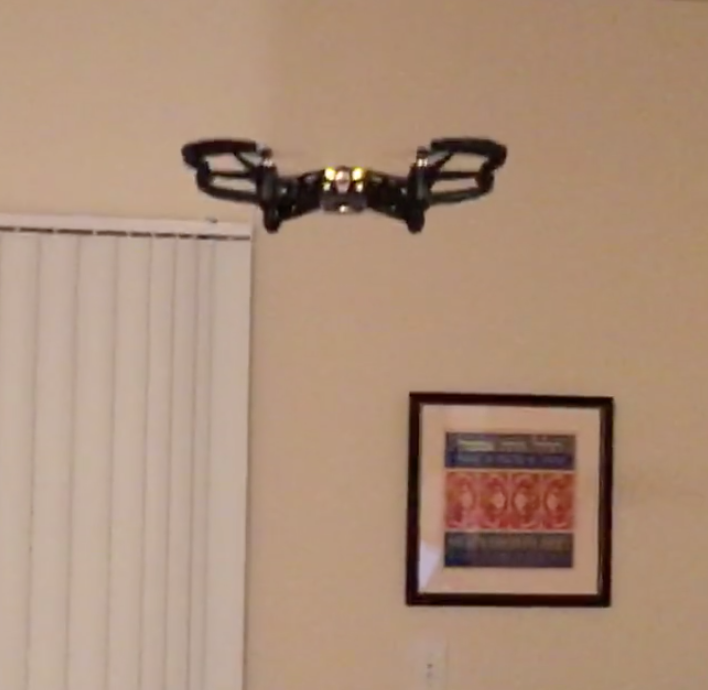 This time, I was a pro. That’s not saying much since the FreeFlight 3 app makes it easy to take off, fly stable and land without you having to be all that proficient. There are three different modes for flying. I opted for the joystick mode and found it to work well. (The mode that used the iPhone’s gyroscope didn’t work as smoothly for me as the joystick that gave me complete control.)

A virtual button in the app’s control panel let me turn on the bright lights. I was able to control the intensity and make them blink on and off. It was pretty neat how bright they got and I am looking forward to flying this little drone at night when we are in Hawaii in December. 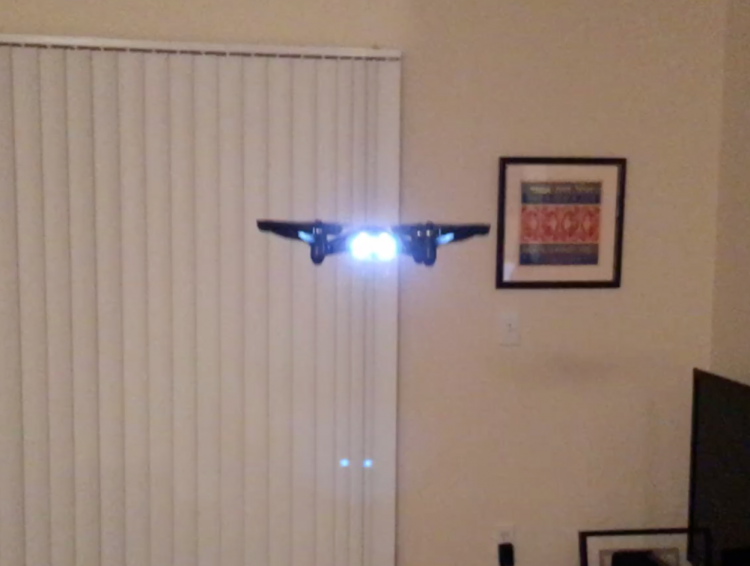 I also loved the way the drone uses its camera to ensure the drone is at the set height and stable. 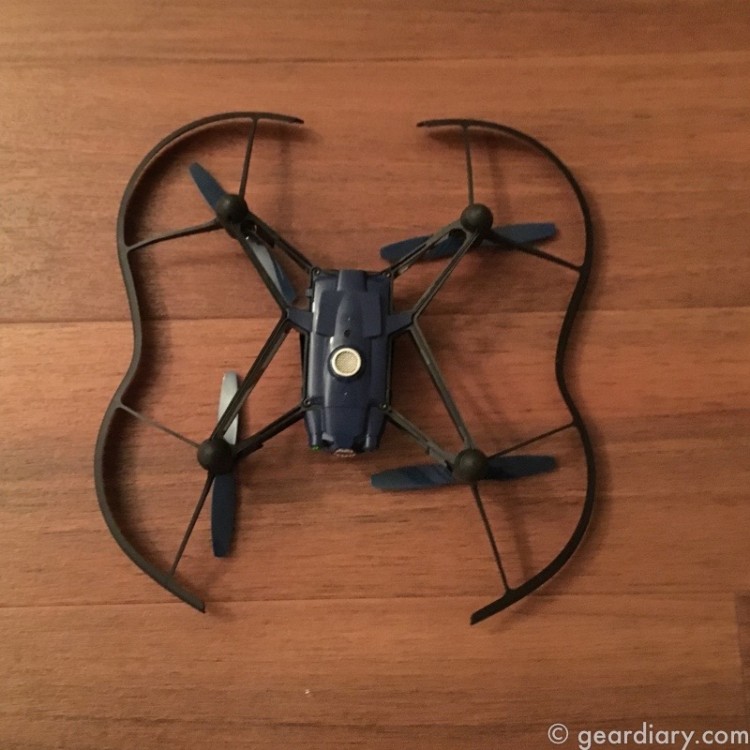 What was cool was being able to use the iPhones camera and screen to “see through” the joypad controls and watch the drone fly. With the tap of a button, I was also able to use the camera to record my flight. This is what it looked like…

Flying this drone was and is simply fun. I quickly found myself playing games like moving the drone through an obstacle course I set up or… As I will this morning… Bringing it into the office and seeing what happens when a drone suddenly swoops into my assistant’s office.  I wish it had longer flight time per charge but even the few minutes of flight each time makes me smile. Honestly, this is more a toy than a serious drone but it is an awesome toy and one that would make a perfect holiday gift. (I have told Raina that a larger drone would not be the worst Hanukkah gift…) 🙂

The lights, iPhone control, ability to film the flight and ability to take pictures during the flight all come together to make this one exceptionally fun flying device. And the fact that even a novice can have decent control within minutes… What could be better?

For this sponsored post, I was able to buy any of the drones I wanted. I opted for the Night drone because I thought it was the sleekest of the bunch and because I loved the idea of lighting up areas that would otherwise remain dark.

If you were picking up one of the MiniDrones, which of the 13 would you choose and why? You can learn more about them here and’s here’s where to buy one.