The Synology DS1515 is an incredibly versatile and powerful NAS. The feature that intrigued me is its ability to be a fully functional surveillance system. The Synology DS1515 sells for $599.99 on Amazon as of the time of this writing. 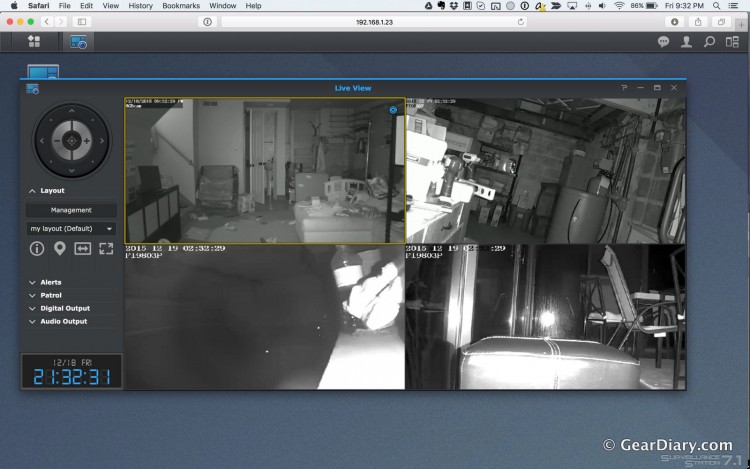 I’m pretty tech savvy, but one doesn’t need to be to get the DS1515 set up as a Surveillance Station. From start to finish, the system was very straight forward to set up, and the default settings were perfect. That said, once you start digging into more detailed settings you find that the Synology surveillance systems is really of world-class caliber and is perfect for home or business use.

For my surveillance system, to use with the DS1515, I’ve decided to go with two 2 TB hard drives for storage of the footage, 4 cameras; 3 outdoor Foscam FI9083P’s and 1 indoor Foscam FI9821P. Both models of cameras are listed as being compatible on Synology’s incredibly long compatability list. The Synology software has a tool that allows you to estimate how much space each camera will use. Based on this, with my 2 hard drives set up for redundancy, giving me about 1.7 TB of usable space, I expect to be able to store over 60 days of footage. 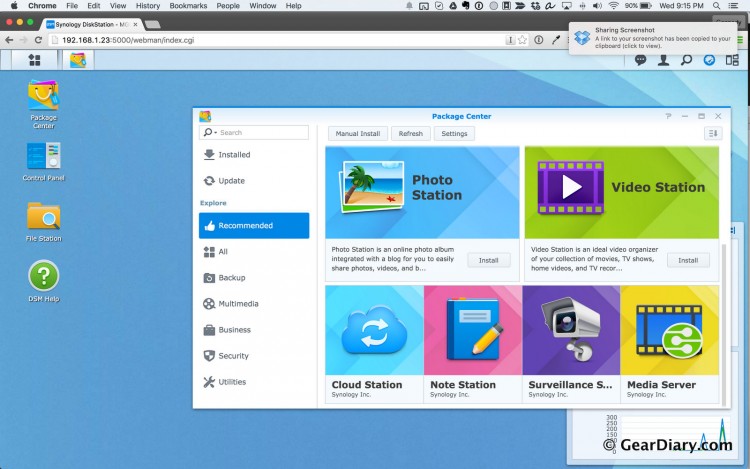 Since Synology doesn’t know exactly how you plan to use your NAS, it has an app-store like application called the Package Center. In order to set up my NAS as a surveillance system, I simply had to head to the Package Center, and install the surveillance app, appropriately named: Surveillance Station. Once set up, setting up cameras and settings were a bit less “wizard like” than the initial setup of the NAS itself, but still very intuitive. There are five main icons in the Surveillance software. Live View is where you view your video feeds in real-time. Timeline allows you to see activity in the past on any given camera. IP Camera is where you set up and configure your cameras. Recording allows you to search by time and get to recorded video clips, and manage recordings. Lastly, Help, which documents basically anything you may need to learn more about. 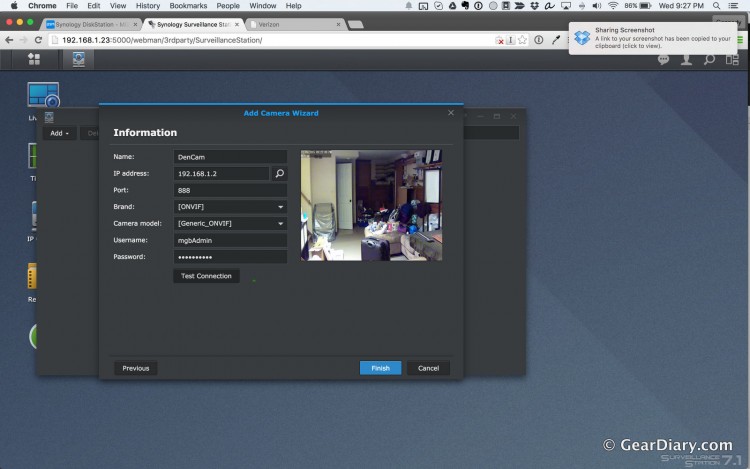 Setting up the cameras is, as per the theme so far, very straight forward. Head to IP Camera, click add, follow the prompts. If you have a compatible camera, it should just show up. Many cameras also support ONVIF, so if your camera doesn’t show up in the list of “Synology supported cameras” head on over to the ONVIF tab to see if it shows up there. For some reason, none of my cameras showed up in the former despite the fact that they appeared on the compatibility list. I even checked my device pack and it was up to date. Once you find your camera, configure the metadata, such as the name of the camera, and enter the log in information. And you’re done with the basic set up. It’s important to note that the Surveillance Station allows you to have 2 cameras for no extra charge, but you can add more cameras by purchasing license packs for $64 per camera license if you buy one or $199 for 4 camera licenses.

The real utility of the Synology Surveillance system comes from the monitoring. Logging in from a browser, you head over to Live View and you see a full view of all of your cameras in real time. The Foscam FI9821P is able to pan and tilt, and I was pleasantly surprised to see that Live View recognizes that and allows you to control the camera’s movement. You can also customize this view to see one camera, or all of your cameras at the same time.

The timeline is the other key to monitoring historical events. Looking at the timeline, the green bars indicate when your system detected activity. You can do this on a one per camera. This is incredibly powerful to check in to see IF there was activity, or to jump to the exact time when there was activity. 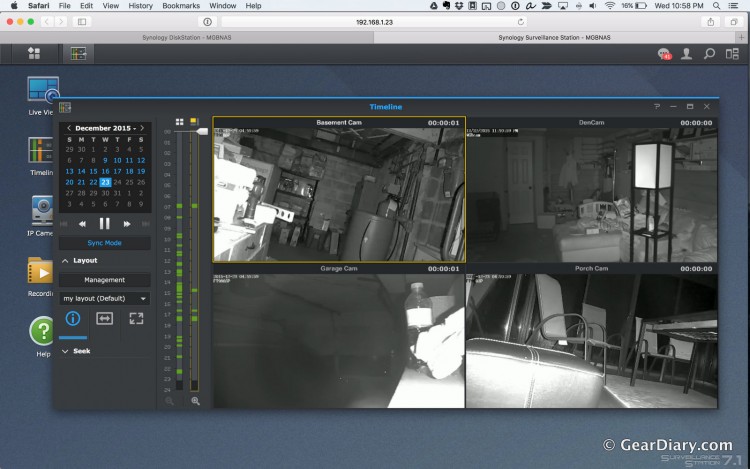 Lastly, Synology has a great mobile app, DS Cam, available for both iOS & Android. The app allows you to peak in to the live view, look at recordings, but does not have a view for the timeline, which I found to be unfortunate. Overall the app is very functional, but not as nice to use as the app for a Canary security system or Nest’s app for the Nest Cam. That said, both of those basically require you to pay monthly if you’d like to store footage for any period of time. The lack of a monthly bill gives the Synology surveillance system a big leg up. 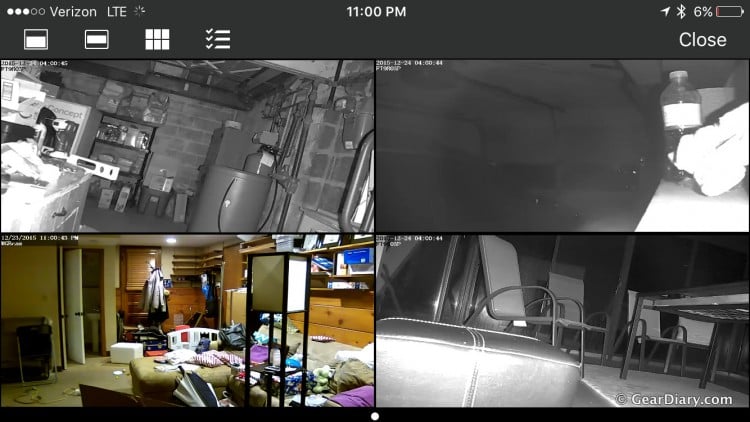 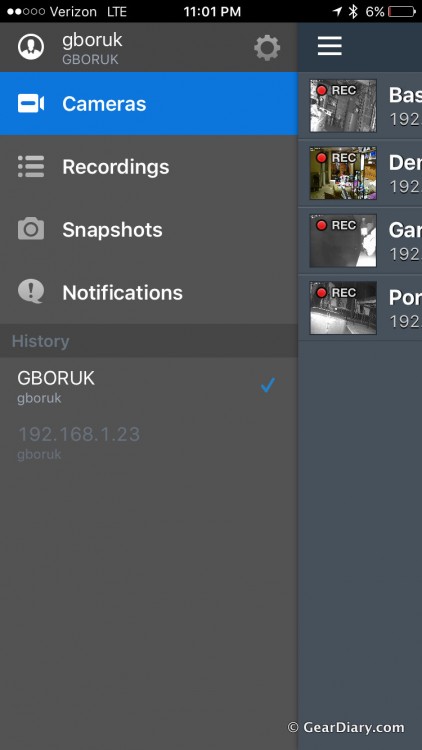 The Synology Network Attached Storage device along with Synology’s Surveillance Station is easy to set up, easy to use, and has the ability to watch activity on your cameras remotely without a monthly fee. With a $600 price tag, plus the cost of cameras, camera licenses and hard drives, one could easily spend over $1000, but for a serious surveillance need, this system has a great mix of versatility; allowing you run more than just a surveillance system as well as use one of a long list of compatible cameras.

You can purchase the at various online retailers which you can find here.

Source: The Synology DS1515 and 2 additional camera licenses were provided to me as a review sample by the manufacturer.

What I Like:  Easy to set up; no monthly fee; remote viewing; high-capacity storage

What Needs Improvement: The mobile app could use a design update and needs to have the Time Line feature