It started innocently enough.  One morning last week Wayne sent an email asking if any of the writers liked Starbuck’s after he had accumulated a fairly large amount of points — $370 worth — on his own Starbuck’s rewards card.  Then today Carly spotted a great deal on Woot! for a Breville 15-Bar Expresso & Cappuccino Maker for $179.99 (that’s it pictured above).

These messages sparked an entire back and forth coast to coast between what gear we each used to  quench our lust for caffeine.    See what the team is using, and sound off in the comments on what gear you’re using to get the most java-goodness  from those wonderful fresh-roasted beans… 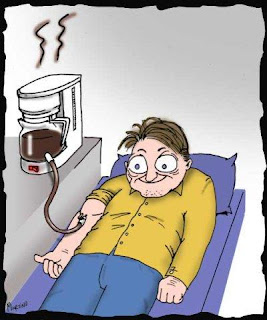 How addicted to Starbucks am I?  I have already downloaded the Starbucks iPhone app into iTunes.  It [was the] first application installed on my iPhone. Clinton’s using the Cuisinart Top Grind 10-cup, but really has his eye on this Saeco Espresso maker.  He also recommends the Starbucks VIA™ Ready Brew Colombia Coffee for those times when you need a good fix, but can’t break away to run down to the closest Starbuck’s coffee shop.

Since his dog mangled the cord on his old expresso machine, he’s had his eye on the Santos Vacuum Coffee Maker by Bodum.

I’ve got a DeLonghi Magnifica; it’s very handy since the nearest Starbucks is 40 miles away. It makes lattes and espresso, but we use it to brew absolutely fabulous coffee with a nice crema.

I bought it in 2005, and paid just under $500 for it – definitely not the $800 Starbucks wants for the same exact machine! It’s full auto, and still going strong with daily use. 🙂

So far, they’ve produced the best — and strongest — coffee at a fraction of the price I would be paying at a local shop or if I still frequented Starbuck’s.  When I’m not using a Bialetti, I still enjoy the AeroPress for a good cup o’ Joe.

Since Carly alerted everyone to the Woot! sale, she has went ahead and ordered the Breville Expresso Maker.   Carly’s actually got some professional barista skills, so don’t be surprised if she ends up with the very best cup out of all of us 😀

And let’s not forget that Travis just posted the “Coolest Coffee Maker In The World!” Whether you’re looking for iced coffee or just adding piping hot water to the extract for a solid cup of coffee, this one really looks interesting (wondering about “extract shots”….hmmmmmmmmm 😉 ).

So….What do YOU use to get your caffeine fix?