In the book “Stranger in a Strange Land”, one of the characters finally grasps laughter when he realizes humor is just laughing at someone else’s suffering. The logical, if painful, end to that theory has been realized in “The Moon Ring”.

The Moon Ring is a ridiculous prank item. It looks like a ring box, but when you open it, there’s a little plastic butt mooning you and making farting noises. For the low, low price of $15.95. It started life as a Kickstarter, but because there is some sliver of decency left in the world they did not succeed there. 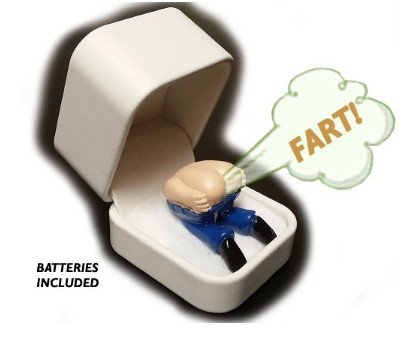 There’s a few reasons why this is a terrible idea. For one thing, it’s not that funny. My three year old would be entertained by it for quite a while, but he wouldn’t grasp or care about the ring box part. Anyone older would be amused briefly if you showed it to them, and then they’d probably forget it existed. So even if you find farts hysterical, you can get your “farts and butts are funny” fix for a lot less than $15.95. You could probably pick up 15+ apps for that same $15.95, and then you’d have a wide variety of scatological noises!

But let’s get to the heart of this product, the idea that you would use it to fake someone out on a proposal or gift. There are definitely couples that might find this amusing, but, again, I’d put them in the above reasons of “Who in their right mind pays $16 for a novelty fart?” So that leaves the idea that one person is a prankster, and thinks it would be funny to pretend they bought their significant other a nice gift (or that they’re possibly proposing marriage) and instead they’re offering up a plastic butt making fart noises. As the recipient, you’re either going to roll your eyes and wonder why you’re dating an insensitive moron, or you’re going to roll your eyes, wonder why you’re dating an insensitive moron, and wonder if they’re living paycheck to paycheck if they spend money on $16 prank toys. Basically, if you don’t have a relationship based on a shared love of fart jokes and someone pulls this thing out, dump them. Immediately.

As an aside, the description of the product in Kickstarter is fairly disturbing. The creator says he was inspired by a date with a woman who talked about wanting a large, expensive engagement ring someday. He specifically says he wanted to vomit in her face, but instead created the Moon Ring. Basically, this entire product was created because a guy had a bad date, so he invented what amounts to a revenge prank. It seems like a cruel and over the top reaction to a bad date! And while he backtracks later to claim it shouldn’t be used for proposals, it’s still clearly an item built out of bitterness, not humor.

So, to recap: the Moon Ring is overpriced for a silly prank item, and cruel if you use it based on the inspired story.