Electric skateboards are a hot trend now that batteries and motors are getting smaller and Maverix has hit a sweet spot in the market with their Urban Spirit skateboard.  The Urban Spirit can cruise up to 14 mph for up to 7 miles on a single charge.  A great board for beginners, the Urban Spirit will set you back $499.

The Urban Spirit features a maple deck with strong grip tape, 400-watt motor, anti-lock brakes, and an alkaline battery.  The motor is connected to the rear wheels only, so it’s a rear wheel drive board.  The Urban Spirit is controlled using a trigger-style hand-held remote that’s powered by a 9-volt battery.  When the trigger is pulled back, the skateboard moves forward; when the trigger is pushed forward, the anti-lock brakes are engaged.  The remote also has three-speed settings that can be chosen depending on the experience of the rider.  After a few days of practice, I was able to keep the speed setting on “max” for the remainder of my testing.  Maverix says that the Urban Spirit is built for people 12-years and older and less than 150 pounds, however, if you weigh more than the suggested weight limit, it’ll still work, you just might not go as fast or as far on a single battery charge.

The Urban Spirit also includes a magnetic safety leash that is meant to be clipped to your shoe or the bottom of your pants.  The function of the safety leash is that if you fall off of the board, it will become disconnected from the board and the board will stop moving.  Another safety feature, as Maverix explained to me, is that the motor makes a high-pitched humming sound when in motion.  This is to warn pedestrians nearby to your presence, similar to the way that lawmakers have asked for false noises called electric vehicle warning sounds to be introduced in electric cars since they are almost silent at low speeds. 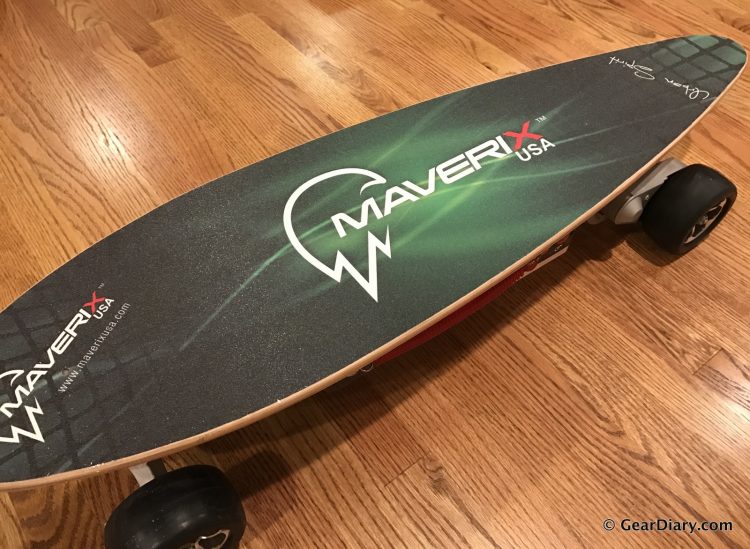 The build quality of the skateboard is very good, as the maple deck is strong and rigid, and the trucks feel solid.  The wheels are soft, but that helps provide some cushion when you’re cruising down the road at 15 mph.  My only complaint in regard to build quality is the remote controller, which feels a bit flimsy when compared to the skateboard itself.  I imagine if I ever were to take a fall off of the board, it’s quite possible that the plastic remote would crack or break apart in the impact.

It took me a while to get used to riding a skateboard that did not require pushing, but once I did, I had an absolute blast cruising around the neighborhood.  I downloaded an Apple Watch app that confirmed I hit speeds of about 15 mph; however, I did notice that the battery did not last 5-7 miles.  The reduction of travel time is likely due to the fact that I’m around 180-pounds as compared to the stated weight limit of 150-pounds.  While I’ve had an amazing time on the Urban Spirit, if you’re over 150-pounds, you might want to look into a board with a larger motor and weight capacity up to 250-pounds like the Cruiser. Just keep in mind that the skateboard will only get heavier as the motor and battery get larger.

Check out the video below of me cruising down the road on my Maverix Urban Spirit:

Very excited to be testing the @maverix_usa Urban Spirit, a 400W electric skateboard! It can cruise up to 14 mph and has an alkaline battery that lasts for up to 7 miles. It even has ABS breaks and a safety leash for emergencies. Stay tuned to Geardiary.com for our full review! . . . . #tech #skate #skateboard #ev #iphone7plus #fun #maverix #nj #optoutside #cruising #technology #gadget #toy #newjersey #lifestyle #geardiary

Maverix has a full line of skateboards, with prices ranging from $199 for a kids skateboard with light up wheels called Maverix Monster to $711 for the Border X, which provides 800W of power and all terrain tires for the ability to go off-roading.  While Maverix’s boards are a ton of fun to ride, they don’t currently fit the bill as a mode of transportation similar to the way that Boosted Boards do.  That’s why I mentioned earlier that the Maverix boards hit a sweet spot in the market.  They’re likely not going to get you to and from work, but they’re a great way to have fun around your neighborhood or at the skate park.  The reason I say that they’re likely not to be considered a mode of transportation is because of the weight of the Urban Spirit, itself.   While Boosted Boards weigh about 15 lbs and would be easy to throw on your backpack, the Maverix Urban Spirit weighs about 33 lbs and is too heavy to want to lug around with you too much.

To summarize, the Maverix Urban Spirit is a fantastic electric skateboard that was a blast to ride, although it’s a bit on the heavy side.  When purchasing one of Maverix’s skateboards, be sure to pay attention to the recommended weight limits to be sure the battery will last long enough for you.

I’ve been told that Maverix has some killer updates coming to their skateboard line in early 2017, so stay tuned to Gear Diary, where we plan to continue coverage of Maverix’s products next year.  I can’t wait to see what they have in store!

You can purchase the Maverix Urban Spirit and the full line of Maverix skateboards from MaverixUSA.com.

What I Like: Tons of fun to ride; Easy to learn; Great speed; Good battery life; Good build quality

What Needs Improvement:  Very heavy, not portable; Remote is a bit flimsy