The two came together to create the Fender Limited Edition Tim Armstrong “Ruby Red” Hellcat Acoustic guitar, which is now available today. The first collaboration between the two, the Hellcat is based on Tim’s vintage 1960’s Fender concert-style acoustic guitar, which is also his personal favorite songwriting instrument. Only one of four finishes, the “Ruby Red” Hellcat is the first available that was personally picked by Armstrong, and inspired by Rancid’s “Ruby Soho” hit from their breakthrough 1995 album, “… And Out Comes the Wolves”.

“It’s always fun creating with Fender,” said Tim Armstrong, “We have four new Hellcat colors. The first one we are releasing is this beautiful ‘Ruby Red.’ It always goes back to me writing on an acoustic guitar. These signatures are inspired by my original ‘Hellcat’ Fender acoustic guitar I have had since I was a teenager. This machine has been my predominant songwriting guitar over the years.” 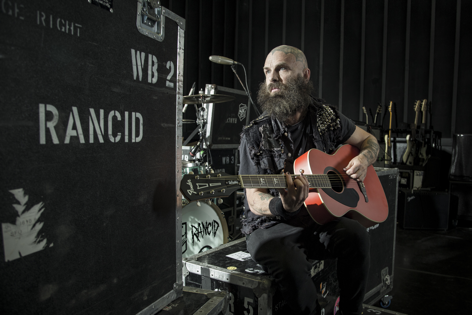 All finishes on the guitar including switching the pickguard from matte black to tortoiseshell were all hand selected by Tim Armstrong as well. With Hellcat inlays, a mahogany body, a rosewood fingerboard and truss rod cover have Tim Armstrong’s signature and distinctive quality. The frets and tuning machines are all vintage, with aged white buttons, and the electronics include a Fishman Isys III System with an active onboard preamp and tuner finished with chrome hardware.

Available for $399.99, only 750 units are currently available as of today, so this will certainly be a first come, first server affair. The final three finishes are slated to be released later this year.

For more information, head over to Fender today.