My Facebook page exploded last weekwith friends posting about how the media has finally figured out a name for our generation-Xennials. Basically, Generation X thought they were too cool for us, and we’re way too cool to be Millennials, so they created a terribly named “micro-generation” just for us. 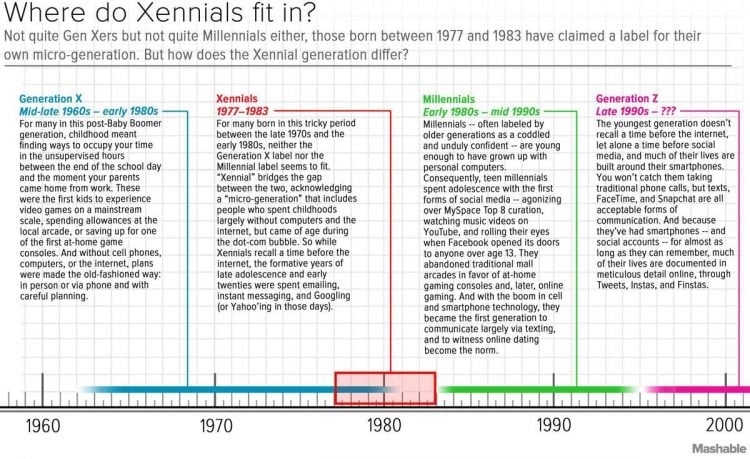 If you’re not sure where you sit, if you were born mid-1960’s to the late 1970’s, you’re considered Generation X. Millennials are often considered everyone after that until the late 1990’s, but that’s not really fair to those of us from the late 70s/early 80s. My brother is on the early end of the Millennial trend-he barely remembers a time when we didn’t have a computer, he had his own computer by high school, and he had a landline for about 10 seconds before owning a cell phone. Meanwhile, I was born in 1981-we didn’t have a family computer until I was in high school, I will never forget the sound of AOL dial-up, I remember when my parents first had cell phones and it was a huge deal to me that I had my own computer to take to college AND that my school had ethernet for all the dorms.

The whole concept of breaking people down into these perfectly sliced time periods is a bit ridiculous. It makes some sense from a sociological standpoint, but it falls apart when it becomes a catch-all for marketers or this idea of a brand identity. My mother, a former history teacher, insists that there’s no such thing as a micro-generation, and that I am either an old Millennial or a young Generation Xer, there’s no in between. Given the choice, I think I see myself as more of a young Generation Xer-I adored my older cousins and talked music and culture with them, and I have a distinct memory of being in Hebrew School and our (college age) teacher holding a moment of silence for Kurt Cobain. My experiences were definitely shaped more by Generation X than by the people born after me.

In the end, though, it’s all a weird argument of semantics. I’m 36 years old, and I live in the suburbs with my wife, child, and a dog. I have peers who are single and live in NYC, and I have friends who live in rural New England. Our birth years really don’t matter at this point, because there’s very little that a marketer can find that we would all respond to exactly the same.

Having said that, calling me a millenial is definitely fighting words…