Posted By: Chris Chamberlain May 28, 2018
ShareTweet

Memorial Day has become regarded as the unofficial kick-off of summer, and with that distinction, the beginning of outdoor grilling season. If you’re a fan of barbecue or low-and-slow cooking in general, temperature control is vitally important to the success of your efforts. I’ve recently discovered an extremely useful tool that has upped my barbecue game, the Flame Boss 300. 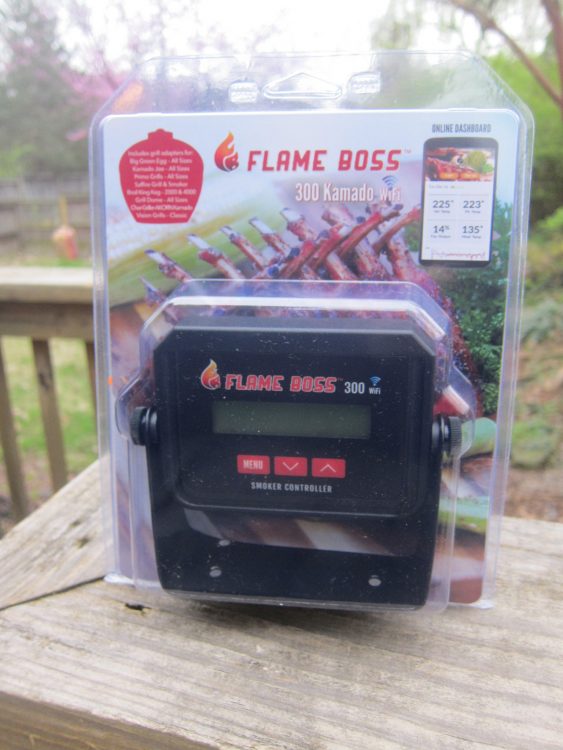 There are several devices on the market that are designed to monitor and control the temperature in your charcoal grill. (There’s no need to worry about that with gas grills, and why are you cooking with gas anyway?!) I have experimented with several brands in the past, but the Flame Boss is the first one that I have found both intuitive and durable enough to make a regular part of my frequent cooks.

There are a few different models of Flame Boss which have varying levels of tech, and special editions for metal grills vs. ceramic kamado ovens like the Primo or Big Green Egg. The review device I received was specifically designed for the ceramic ovens and fits most popular brands, including:

If you have an unusual metal grill, you can always just drill a couple of holes to mount the hardware, but that shouldn’t be necessary for most models. 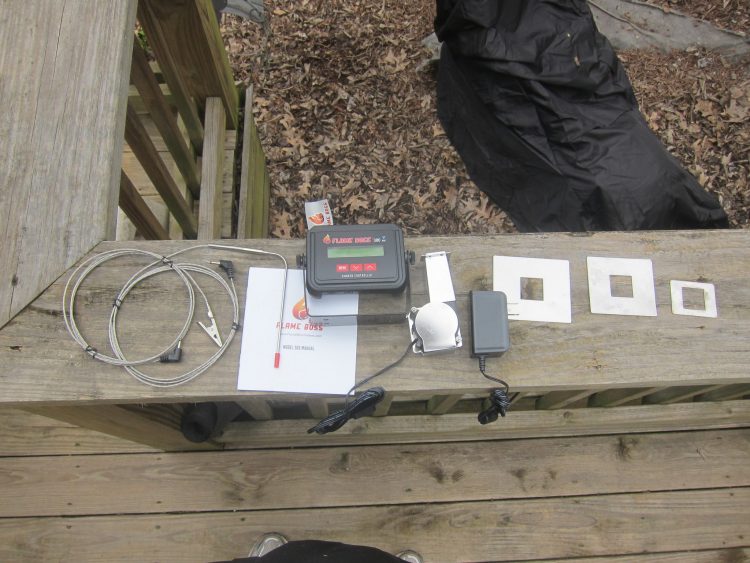 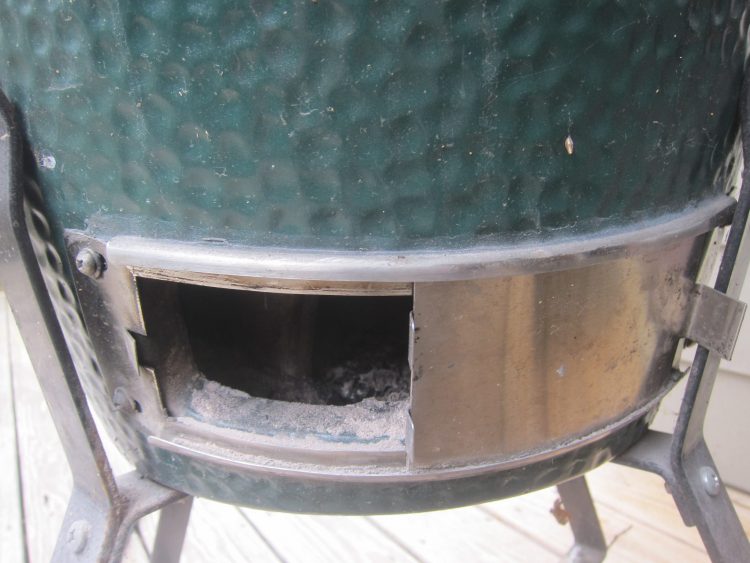 I’ve been able to use the same bracket on both my Medium Green Egg and my Primo XL, but these demonstration photos were taken using the former. 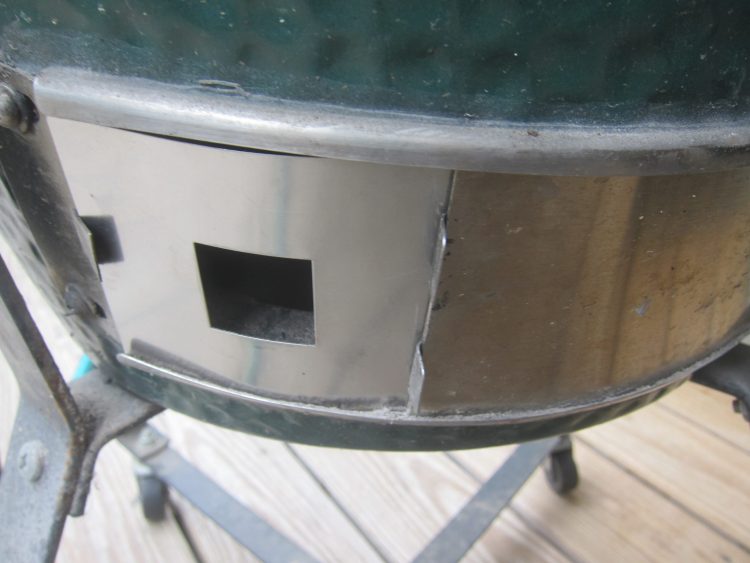 To attach the fan unit, simply open the bottom vent of your grill all the way and slide the corresponding plate into place. The adapters are made of relatively thin sheet metal which means you can easily bend them just a bit to fit the curvature of your vent. They seem to hold in the heat very well, but also cool down quickly when your cook is over. The fan slips easily into the hole of the mounting bracket and a flange holds it in place simply by the weight of the device, with no extra attachments needed. 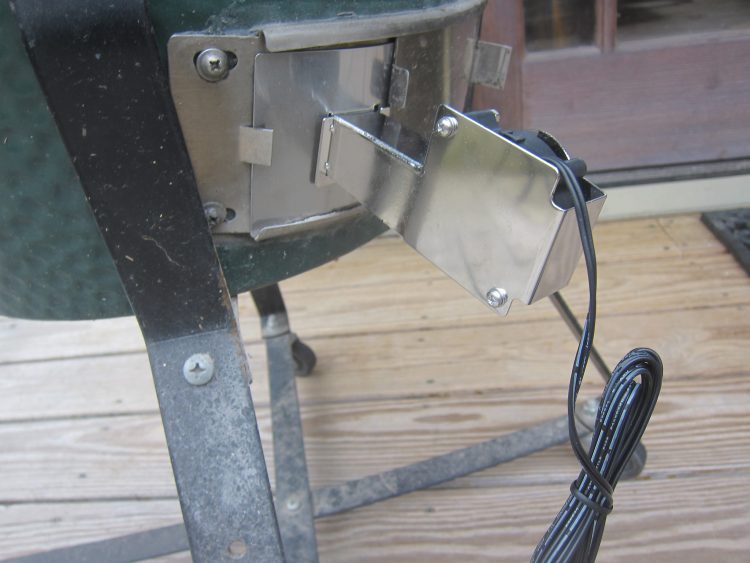 The Flame Boss 300 is pretty simple mechanically, employing a small variable speed fan to control the airflow in your firebox. Combined with the grill temperature probe and a thermocoupler, the fan blows to raise the temperature to your desired level and then cuts off or runs at a lower speed to maintain the temp. 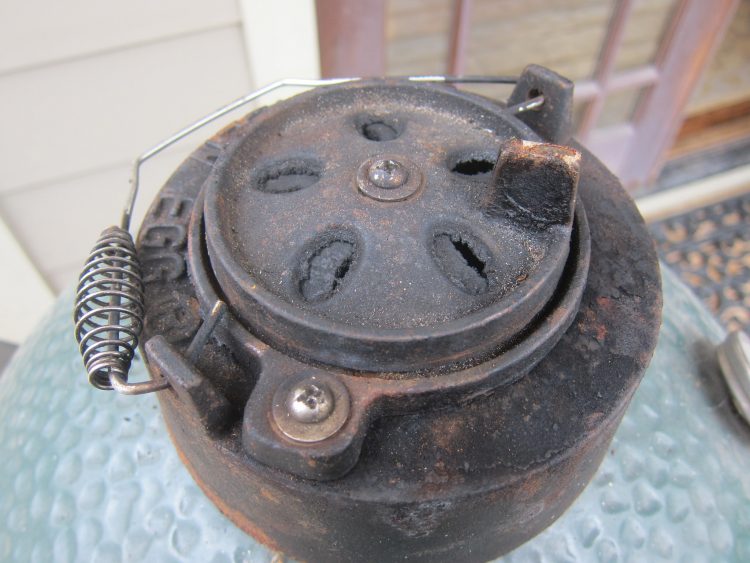 To better control the temperature environment inside the dome of your grill, Flame Boss suggests opening the top vent just a crack to allow air flow without flaring up the fire. I found this arrangement to be rock solid when it came to maintaining temperature once the proper level was achieved. 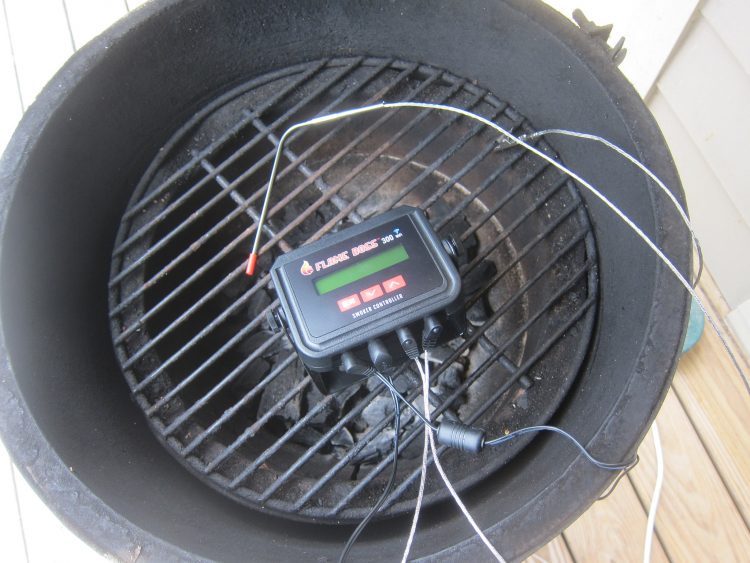 The unit comes with a pit temperature probe which uses an alligator clip on the grill grate to monitor and a meat probe which you can use to track the progress of your cook. With optional Y-cable and meat probes, you can actually use up to three meat probes at the same time to monitor different parts of a large brisket, for example, or different pieces of meat on the fire. 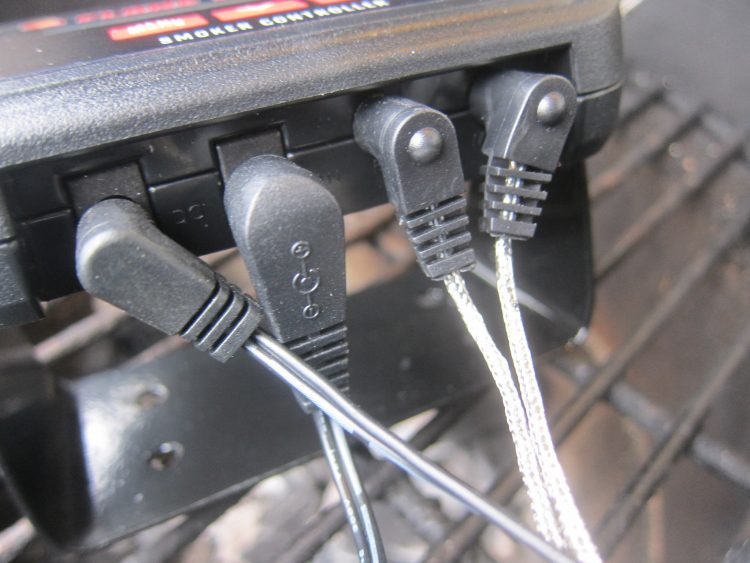 The main controller unit of the Flame Boss 300 has ports on the back for a main power cable that provides juice to both the CPU and the fan, the two probes and a connection to the blower unit. It is a lot of cables to keep track of, but if you were to mount the control unit in one spot permanently, it would be pretty easy to keep them organized. Since I used the Flame Boss on two different grills, I had to spend a bit of time untangling cables before each cook, a minor quibble. 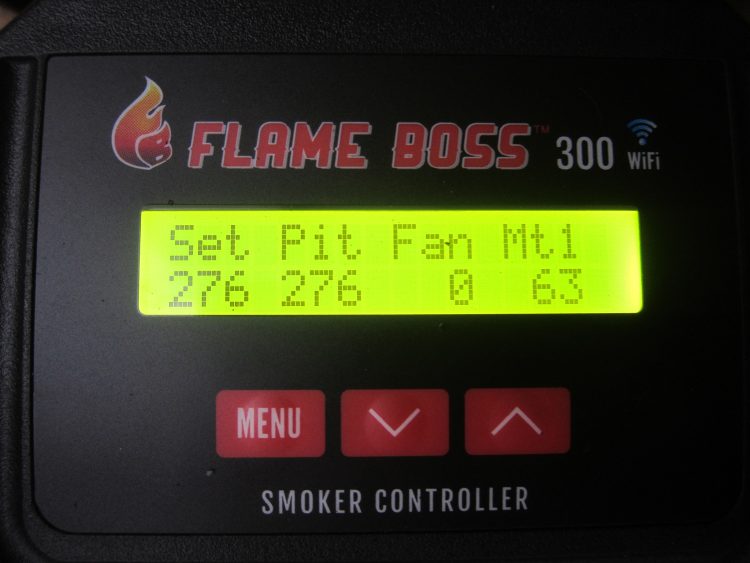 Once the control unit powers up, it’s pretty intuitive to use. Well, at least after you go through the process of setting it up with your wi-fi. Since the Flame Boss depends on an internet connection to connect to your iPhone or Android device, it’s critical to go through this setup. You can either do this within the menus of the control unit or more simply using the app to make the connection. I was not smart enough to do it this way the first time. (Actually, I wasn’t patient enough to read the instructions first. My bad.) 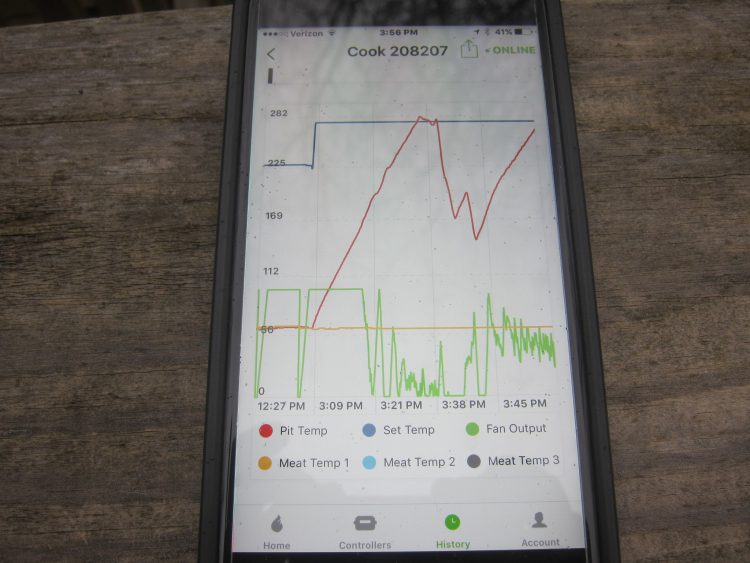 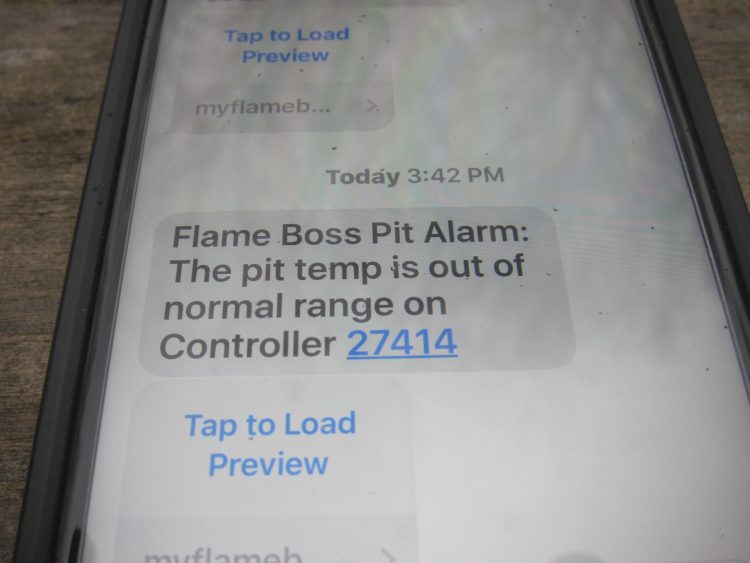 The app allows you to track your cook from the comfort of inside your house, monitoring pit and meat temperatures along with the fan output. You can also change the pit temperature from the app without having to leave your couch. I’ll cook vegetables at 325 degrees and then crank the grill up to 400 to cook steaks while the veggies stay warm in the oven.

If you’re more of a verbal person, there’s also a Flame Boss skill for Alexa so that you can do most of these tasks with your voice instead of through the app. Personally, I prefer to watch the graph to track my pit and meat temps, so I use the app.

Even if you don’t pay close attention to the app, you can set up the Flame Boss to send you texts when the meat reaches the desired temperature or if your pit temp gets too hot or cold. The unit even detects if your grill is opened and turns off the fan so that the flame doesn’t get out of control. You can also set the grill to hold the temp of your meat for a while if it reaches the desired level before you’re ready to serve.

You can also access the history of your past cooks through the app or online, along with your notes of what worked or didn’t work in your quest for the perfect brisket. Users can also share the graphs of their cooks so you can compare techniques and results.

So basically, the only mode is automatic, which I really appreciate. In fact, if the power to the control unit cuts off for some reason, it will save your last temperature and return to it as soon as power is restored. You can also set timers to remind you what the next step is in your cooking process, whether you need to rotate the meat or change the cook temp or add some sauce, whatever you want. 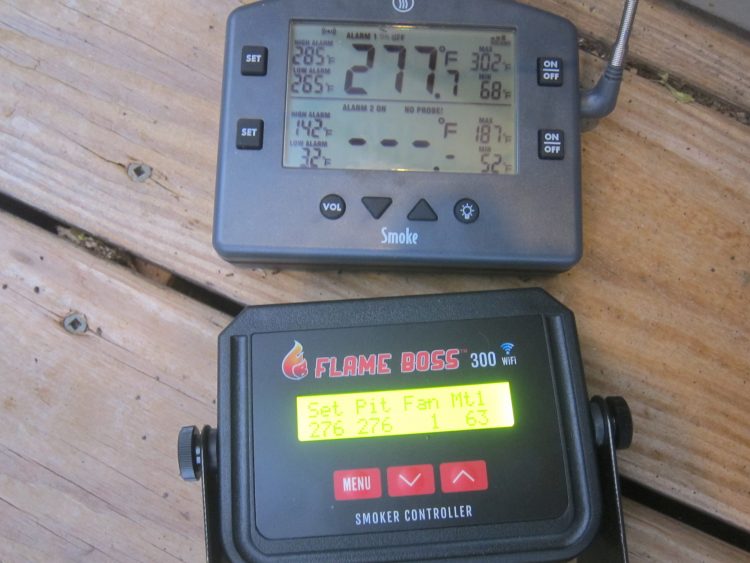 To check the accuracy of the probes and the ability to hold a temperature, I installed another probe from an industrial thermometer I often use to cook with. I discovered that the temperature readings between the two probes stayed within a couple of degrees during a three-hour cook, pretty darned impressive.

In fact, if you were to put this sort of probe inside your kitchen oven, you’d discover the that the inside temperature probably varies by as much as fifteen degrees as the heat source, either gas or electric, cycles on and off. Using continuous flame, the Flame Boss fan unit and the insulation of ceramic, you can actually maintain a much more stable and even heat than in your traditional oven. I don’t imagine that this is intuitive to most people.

Overall, I was really pleased with the performance of the Flame Boss 300. While it certainly shows its usefulness in longer cooks, I find that I’m using it even when I’m just doing a quick sear on a couple of steaks. The big advantage is that instead of filling your grill with charcoal, setting it all ablaze and then waiting for it to cool down a bit to an even cooking temp, you can just light a small portion of the pile of coals and depend on the Flame Boss to achieve a specific accurate temperature. Once you know you’ve reached, say 400 degrees, you can put on the steaks for ten minutes and then shut everything down. Good lump charcoal ain’t cheap, and the savings for a frequent griller can add up if you can get multiple cooks out of the same load of coals. Not to mention the cost of meat that won’t get messed up because you didn’t exercise adequate temperature control.

Which is to say that the Flame Boss is not cheap at an MSRP of $349.00. But if you consider the savings mentioned above and the sheer satisfaction of knowing that you will indeed be the boss of your grill, I think it’s an investment worth considering for any serious outdoor cook.

The Flame Boss 300 can be purchased from the manufacturer’s website or from many outdoor grill accessory retailers at an MSRP of $349.00.

Source: The Flame Boss 300 was a manufacturer-supplied review sample.

What I Like: Ease of use; Rock-solid temperature control; Intuitive interface

What Needs Improvement: Initial Wi-Fi set-up can be cumbersome if you don’t use the app