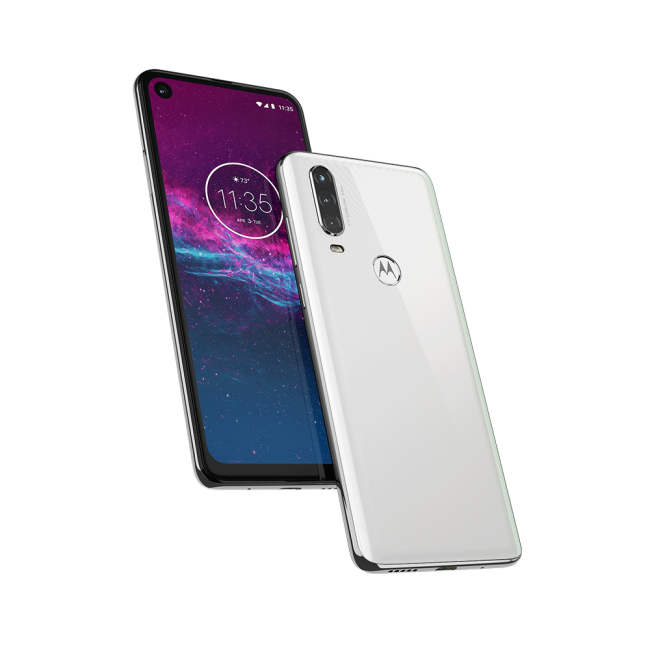 Specs-wise, the One Action is about what you’d expect from a budget Android phone in 2020. It sports a headphone jack, single Dolby speaker, a fingerprint reader on the back, FHD 6.3in screen, 4GB of RAM, 128 GB of internal storage, and a microSD option for further storage. It also uses USB-C, which is great from a universal charger standard point of view, though less exciting if you’ve got a drawer full of micro-USB ports quietly mourning their obsolescence (it’s possible the COVID-19 lockdown is getting to me if I think the cables are crying). 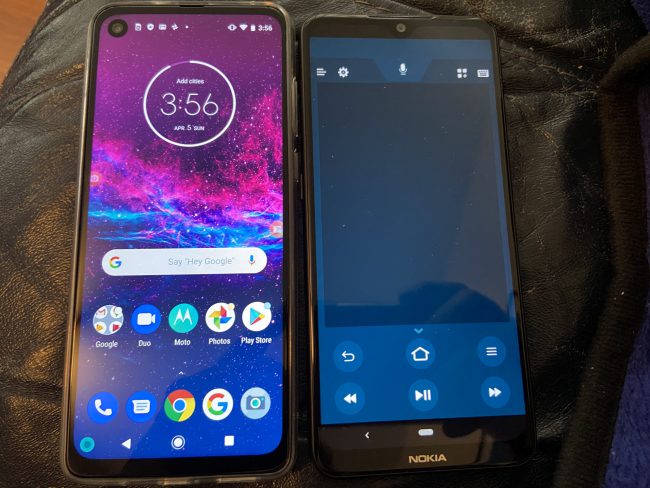 On the left is the Moto One Action and on the right is the Nokia 6.2; you can see the One Action is longer and thinner which makes the bigger screen more ergonomic.

You can check out all of the specs here, but effectively, you’re getting a solid, serviceable phone with 4GB RAM, 128GB user memory, a 3,500mAh battery, that’s running Android 9; it should serve you well for a while. But that goes for most Android One phones! What makes this one special is the triple action camera on the back, giving you all sorts of extra photo and video options! 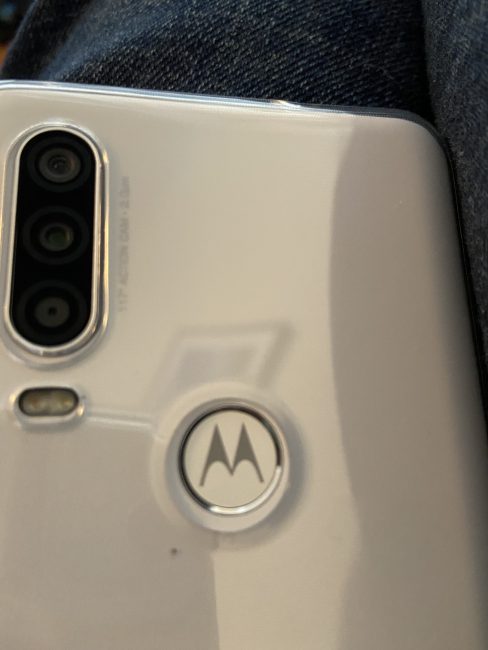 The three cameras ready to work hard to make you a good photographer; also pictured is the fingerprint reader/Moto logo.

(Yea, probably shouldn’t have sped the geese up to 32x…but if I had a few extra seconds of footage, I would definitely have set this to some Yackety Sax just for the fun of it)

This is the AR option-there were several, but who doesn’t love Detective Pikachu making vaguely threatening gestures with his butt at you?

I took my son out on an adventure around the neighborhood, and we tested some of the camera features. We did get lucky in that some geese were willing to let us shoot some video of them; sadly, the fish we saw in the pond only hung out long enough for one quick shot. Better for the fish, but kind of rude and didn’t contribute much to the review. Luckily for the fish, that pond does not allow fishing or we’d be having a face to fin chat. In any case, there’s a tremendous number of options from standard panorama to color pop, augmented reality, and time-lapse. The camera also boasts AI image stabilization and can shoot widescreen even if you’re holding the phone in portrait mode. That vertical phone with widescreen camera footage trick is probably one of the coolest parts of the phone. It’s a long thin phone, so it’s actually really easy to hold it in portrait mode despite the large screen, meaning you can more easily snag photos on the go without worrying Instagram is going to judge you for your vertical video footage. 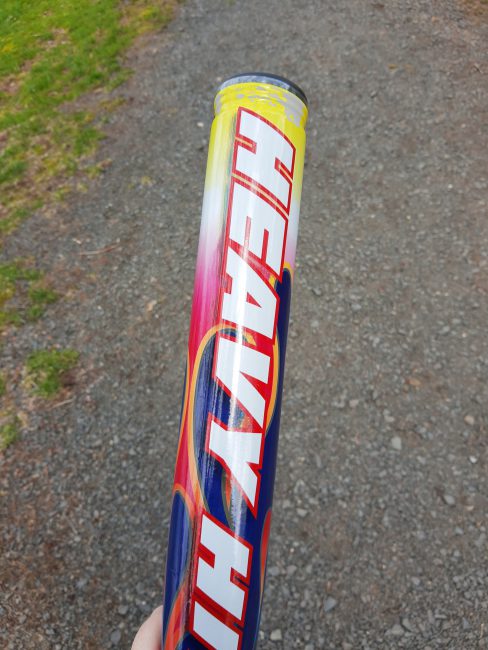 Colorpop helped make this stand out 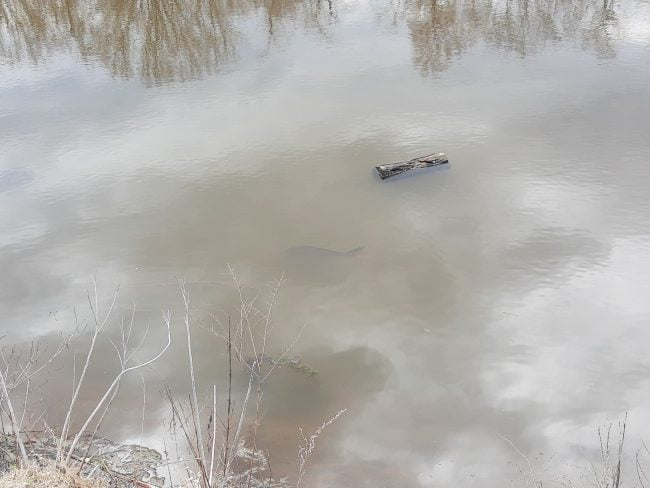 My fishy friend wasn’t super cooperative but you can see his outline below the log-what you can’t tell is that this photo was taken from several feet away on an embankment balancing a phone and wiffleball bat at the same time…the image stabilization definitely works! 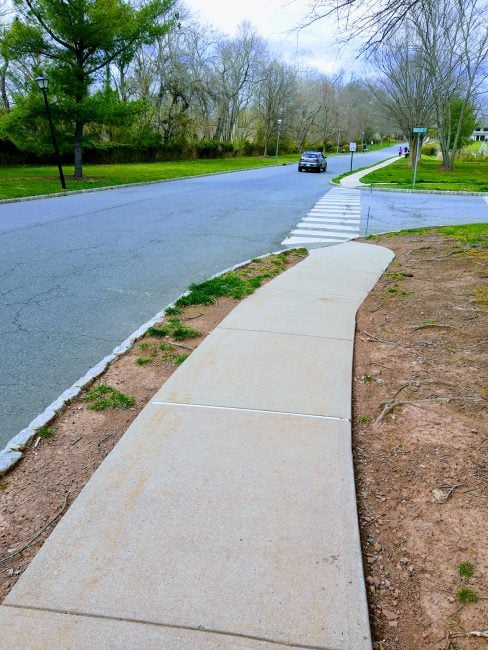 You can apply filters on the fly, which can enhance colors or dull them depending on your goal…

So the camera, as the star of the phone, does a really good job. It has a slew of options, the options are easy to use, and the phone’s weight and design make it super easy to operate it with one hand. Unfortunately, one thing prevents me from being insanely enthused about this phone … it’s only got an IPX2 rating.

For those who aren’t up on what that means, it translates to the phone being rated for splashes, but not submersion or significant water exposure. It also isn’t protected against dust, dirt, and other foreign objects. So it has this incredible camera, with all these bells and whistles, and yet — you can’t take it adventuring anywhere remotely off the beaten path. It feels like a huge whiff from Motorola since even a slightly better water rating would mean you could safely take this phone to the beach or out fishing. But with only splash protection, it might spend more time in a dry bag or plastic ziplock than it is utilizing that awesome camera!

If your camera needs extend to taking decent shots of a kid’s baseball game, the Moto One Active is a good choice. It’s affordable, it has decent specs, and it takes really good photos. The downside is that if you’re looking to combine your GoPro/similar action cam and your phone into one device…the One Active just isn’t robust enough to replace a true action camera; that’s a shame because if it did, it would truly be one compelling package at under $400.

The MotorolaOne Active is available for (it’s on sale for $249.99 right now!) directly from the manufacturer.

What I Like: Easy to use camera features; Many options for filters and styles; Takes excellent photos without much fiddling; Can take widescreen shots while holding the phone vertically, which is pure sorcery; Unlocked phone with no contract selling for just $249.99

What Needs Improvement: The phone itself is not robust enough to be used in many action-cam situations