Posted By: Michael Anderson May 5, 2020
ShareTweet

Slated for an early 2021 launch, the Wadjet Eye developed Nighthawks promises more action and control than Coteries of New York, and a more traditional adventure narrative than the upcoming Bloodlines sequel. 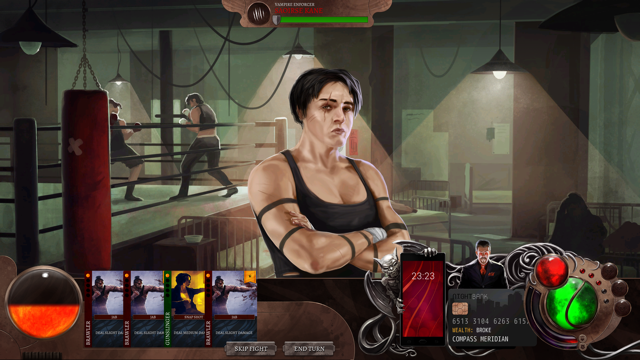 Vampire stories have always been compelling, mixing near-immortality, incredible power, lack of aging, sexuality, and charm. The inversion of the typical day-night cycle adds mystery, intrigue, and danger. In Nighthawks, you play a relatively new vampire struggling in a city where vampires are no longer a secret. The game sets you up to progress from a low level all the way to a master vampire controlling an empire out of your nightclub.

Six months ago, you died and were reborn. A vampire. A predator. Not a mere creature of the night, but one of its masters. At least, that’s how things were supposed to be.

Unfortunately, the world has changed. The secret is out. Vampires have finally been exposed, and though your existence is tolerated, your new thirst is not. You came to the one city willing to promise a fresh start, only to find suspicion and starvation waiting on its dark streets. But death could not hold you, and fear will not hold you back. When the sun goes down, outcasts *rise*.

It’s time to seize the night by its throat.

Enter a twisted, darkly comic city where humans and vampires are struggling to live together. Take over a failing nightclub on the wrong side of the tracks, and turn it into your personal empire through seduction, intimidation, and careful use of secret supernatural Gifts. Befriend and recruit fellow outcasts, digging deep into their stories and harnessing their skills. Explore a fully voiced, lavishly written world of dark shadows and bright neon, where your every decision will push the world towards a bold united future, or forever destroy any hope for peaceful coexistence. 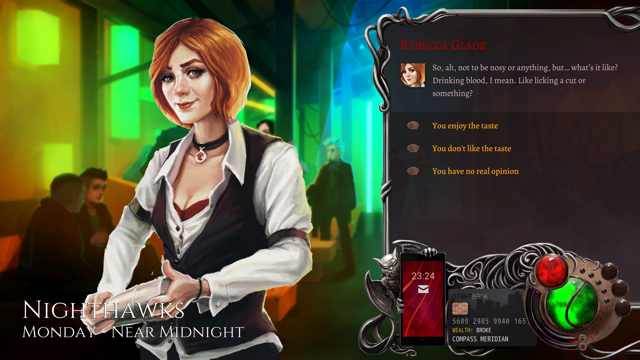 FEATURES
– Climb from rags to riches as a modern Vampire
– Build your nightclub into a true nocturnal empire
– Meet a cast of off-beat, fully voiced characters
– Indulge your inhumanity— but be home before sunrise
– Engage in strategic combat against humans and vampires alike

The small team behind Nighthawks has produced some of the best adventure games in recent years: it is written and designed by Richard Cobbett (Sunless Sea/Sunless Skies) with art by Ben Chandler (Unavowed, Technobabylon, the Blackwell Series), and produced by Wadjet Eye Games.

Have you played any vampire-centric video games? Do you like them? If so – keep an eye out for Nighthawks early next year!

Check out the initial trailer: