Ready Player One has been the butt of internet jokes for years. I didn’t hate it, though I agree it wasn’t exactly fine literature. Still, I enjoyed it enough that I impulsively bought Ready Player Two over the weekend despite poor reviews. Should you read it? Well, read on for my review. 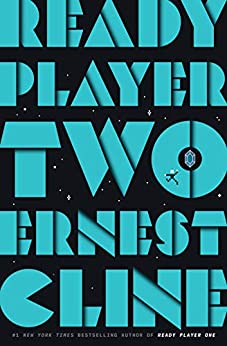 First of all, it’s impossible to discuss the book without some spoilers, so fair warning — though I’m guessing if you’re reading a review of RP2 at this point, you’re either on the fence about whether it’s worth reading it at all or you’re looking to get the high points, so you don’t have to bother to read it. But if, for some reason, you’d be offended knowing the plot of a book that reads like the love child of the more liberal areas of Reddit and Wikipedia, uh … stop reading now?

Ok, so now that you’ve been warned:

The book picks up not long after the events of the first book but then jumps ahead quickly. Wade/Parzival goes into the OASIS again and goes to hang out in the Anorak’s Castle, only to find the “Easter Egg” from the first book has a new message for him about ANOTHER quest. It leads him to a previously-unopened storage unit in his company headquarters because large corporations are often known for forgetting where they’ve stored highly classified prototypes. It turns out to be a way to experience virtual reality as though it’s 100% real-it jacks into your brain, and you can experience all 5 senses virtually. Of course, people love the idea of completely ignoring reality, and it makes Wade and his friends even richer.

But, it also had a quest for Wade-as the heir to James Halliday, the guy who created the OASIS, he can find seven shards, which are related to the woman Halliday loved who was married to Halliday’s best friend and co-founder of the OASIS. So instead of obsessing over the life of a dead man, Wade is obsessing over the life of a dead woman who did not in any way consent to or plan for her life being dissected by the entire world. Oh, and also, there’s an AI version of James Halliday who holds everyone jacked into the neural interface hostage until Wade finds all the shards, and he has 12 hours before people start dying. Somehow, the part the characters in this book about fully neural virtual reality find unbelievable is that the inventor of this insanely complex technology figured out how to make autonomous AI, AND that it turned evil, AND that instead of deleting his evil alter-ego, he just locked it away and thought “Well, apparently I have pretty sociopathic tendencies, but I’m sure lobotomizing my AI self and locking him away is much safer than deleting the whole concept, this should be fine.” Spoiler alert: It is NOT fine.

Like the original, it’s a compellingly geeky idea, but very idealized and fan-fic level character development. I almost can’t pick on how one-dimensional the hero and his friends are because when they’re all like that, it’s not that the hero is a bad character; it’s that the author struggled to create fully realized people. On the upside, Art3mis gets a lot more badass (probably because they made her far more badass in the movies, and the sequel was definitely written with a movie adaptation in mind); I actually thought the through-plot/quest was less cartoony than the first book. It wasn’t as bad as the author’s second book, Armada (which is literally the only book I advocate burning. Like, every digital and physical copy should be found and burned, and we as a society should just pretend it never happened).

To be clear, this is not a great book. It is, however, a good book to read if you can get it for free or cheap to read on a plane, on vacation when you just want to turn off your brain, or if, like me, you have an insanely low bar for sci-fi books and will read anything remotely coherent. Seriously, last week I read a book that involved the USA using a supercollider to speed up time on an island off the coast of Texas where the interns were the reincarnations of Newton, Einstein, Da Vinci, Catherine the Great, and a gender-swapped Martin Luther King. If you read that last sentence and thought, “Well, I would read that!” then you’d probably enjoy Ready Player Two as well!

You can get Ready Player Two on Amazon or at your favorite local bookstore.