By now you have likely seen that at CES, SanDisk announced their amazing new 128GB Compact Flash Card, a size that still boggles my mind. Available later this quarter for a MSRP of $1499.99, this card isn’t for the feint-hearted. But when you consider that it wasn’t too long ago that a 5GB PCMCIA card retailed for $500 plus, the realization is staggering that this amount of memory is available in something so small. While meeting with SanDisk, I had the opportunity to take a look at their new CRUZER Slider which along with other features also has “error-proof insertion”, which should be great for people who never seem to be able to get their USB stick inserted the correct way on the first try. It’s the little conveniences that make a product more usable, and this is a helpful feature.

Another product mentioned was Sandisk’s new Secure Drive, an encryption and online backup application that they will be rolling out over their entire line of flash drives. This service will offer private and public folders, as well as online backup of up to 2GB for free. Larger storage options will be available, including $35 for GB or $70 unlimited storage.

SanDisk SecureAccess Software
•    Password-protected “vault” automatically secures files with 128-bit AES encryption, protecting against unauthorized access in case the drive is lost or stolen.
•    Secure partition lets consumers determine which files remain private when sharing a USB drive with colleagues or friends.
•    Additional protection against computer crashes and data loss is optionally available for users with up to 2GB of secure online backup from Dmailer. Remotely access online data anytime, anywhere, and easily share large files over the cloud.
•    Easy to use drag and drop functionality; the vault’s capacity on the USB flash drive adjusts automatically as content is added or removed.
•    Currently shipping on select SanDisk USB drives. Perhaps the coolest part of the meeting came when I got to see the an unwrapped32 GB microSD card as well as what it looks like through an electron microscope. SanDisk had graciously given us four of them for the CES attending GD staff, which made me even more appreciative of the technology used in these tiny marvels. I was told that the vast majority (over 80%) of all components in all of their cards are actually made by SanDisk, that they manufacture over 1.5 million memory cards a day (!!!), and that they have over 3000 patents. SanDisk was the inventor of many of today’s popular memory cards form factors, and their goal is to continue fitting more memory into smaller and smaller form factors … but not necessarily on the consumer memory card level.

I couldn’t help but ask if microSD was as small as they planned on taking consumermemory cards, as there are quite a few people who have lost them (not that I have ever done such a thing), who have trouble grasping them for insertion, etc, and they agreed that much smaller would enter the point where small form factor becomes a usability issue. I suspect that microSD is going to be the flash memory card form of choice for some time, and the good news is that SanDisk appears to be poised to cram even more unbelievable amounts of memory into that tiny goodness. 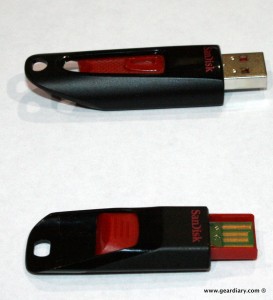