Sometimes you might have your phone in a pocket or in your gear bag.  That’s not too bad if you have the phone’s ringer on, but what if you forgot to turn it on?  That’s where the Buzzband MB20 comes in. The Buzzband MB20 looks like a fairly simple device that can help you keep that ringer off but still be notified when you get a call.  To get started, the first thing you have to do is pair it up.  To do that, all you have to do is press the only button on the band until its LED lights up steady.  Then, go to your phone and browse for the device.  If you have to enter a code in, enter in: 0000.  At this point you are ready to pop that phone in your pocket and put the Buzz Band on your wrist.

The Buzz Band has one more feature that is handy for those who are bad about leaving their phones behind, and that is the out of range alert.  When you leave your phone and are 10 m or more away, the band will buzz 3 times every 10 seconds for 30 seconds or until you come back into range.  Once back in range, it should automatically reconnect and stop vibrating.

The Buzz Band is rechargeable with the included USB cable.  Once charged, you will have about 120 Hours standby time.

There’s much to like about the Buzz Band, but one thing I really don’t care for — namely that the Buzz Band MB20 uses the headset protocol.  The downside to this is my Droid2 can only have one headset profile device on at a time, which means I just use my headset’s features instead.  It’s now available from the MaxiMobileShop, in France.

MaxiMobileShop was nice enough to give us two Buzz Band MP20s to give away!  So, leave a comment below specifying whether you prefer Star Trek (and if so, which series) or Star Wars by Tuesday, February 8th. My son Luke will draw two names out of a hat and announce the winners on the 9th.

What I liked: Fits my arm snugly; it’s lightweight

What needs improvement: Connects with headset protocol, which will be an issue with phones that only accept one profile device at a time

The Giveaway’s Fine Print: This giveaway is open to winners with shipping addresses in the United States only; entries will be accepted until Midnight, February 8th; two random winners will be chosen and notified on Wednesday, February 9th. If you enter via Facebook, be sure to set your profile so that you can receive messages from non-friends. Good luck! 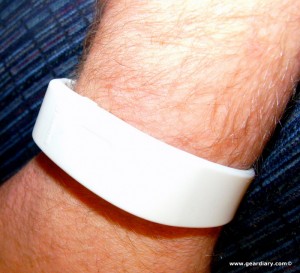