This is my 13″ MacBook Air. I love it. Especially now that Apple fixed it after my clumsiness a few weeks ago (when I dumped a drink on top of it). With 4 GB of RAM and 256 GB of solid-state storage, the laptop doesn’t feel like a compromise in any way shape or form. It is super-fast, and super quiet. Add in the fact that the 13″ screen has the same resolution as the 15″ MacBook Pro that I was eying a few months ago, and you have what has become, by far, my favorite laptop ever. No, actually, it IS my favorite computer ever. In fact, it is pretty much the only computer I use.

The screen is gorgeous and gives me enough real estate for just about everything I need to do: except when it doesn’t.

There are times when I run into a situation in which it would be helpful to have my 27″ iMac once again … but I don’t think that Judie will be giving it up anytime soon. With that computer I was able to have two or three windows open side-by-side at a time, which comes in rather handy when you’re doing certain tasks. For example, we’ve been hard at work building our new sister site New Gear Daily. The goal of that site is to share the various deals we come across on a daily basis with all of you. (You can grab the RSS feed here.) While building the initial site, I found myself going back and forth between the settings window and actually seeing how the site had been rendered each time I made the smallest change. Time and again I went back and forth. Having only one window available to me has been a bit frustrating. Fortunately I’ve had a solution sitting right by my desk and things became a lot easier once I started using it. Yes, the Field Monitor Pro I wrote about a few weeks ago has been incredibly handy as we’ve been building the new site. I simply plugged the monitor into a power source, plugged the included USB cable into my MacBook Air, and turned on the second monitor. Within a few seconds the screen flashed and I had an extended screen for my MacBook Air.

That allowed me to have the settings window on the 15″ display and the actual site on my MacBook Air; now I had 28″ of screen real estate, and I was able to do my work so much more easily.

Still, there were times when I found myself wanting to refer to Gear Diary and some of the information there. Fortunately I had a solution sitting right by my desk for this second concern, and things became a lot easier once I started using it. Yes, Mobile Monitor Technologies was kind enough to send not one but two of the Field Monitor Pros. That meant I was able to take the second monitor and plug it into the MacBook Air’s second USB port. I created a separate browser window for it as well, and I brought Gear Diary up on that screen, too. Now I had 43″ of screen real estate with the settings window on one screen, the rendering of the new site on the second screen and Gear Diary on the third screen. It worked beautifully, and the additional screens seemed to put no additional demands on the MacBook.

And, because of the way in which the screens have been designed I didn’t have to have the entire “bottom piece” cluttering up my desk. No, I was able to flip the screen around on top of itself and use the built-in stand to give myself the same access to all three screens without giving up too much desk area. Using the flexibility of the stand’s angle, I even had the option to put one monitor in front of the other and have Gear Diary extend to both of them. (I’m not sure why I would ever want to do this, but it’s fun to know that I could if I wanted to.) And I wasn’t limited to one arrangement; if I wanted to, I could take the Air entirely out of the equation.

So let’s take a look at the actual monitor itself. It comes packaged in a simple, nondescript box. Open the box and you’ll see that there is a quick start guide, optical media for the necessary DisplayLink drivers, the Field Monitor Pro and the power and USB cables. Closed it looks like a nondescript laptop; it is not.

Why Our Monitor: For years, accountants have used dual monitors at their offices in order to improve their productivity. But until now, there hasn’t been a product that combines portability, durability and utility in a way that makes it easy to use dual monitors in the field. Our Field Monitor Pro has been designed by accountants to make it the perfect dual monitor for audit field work.

Durability: A conventional monitor is susceptible to screen damage when carried into the field. Field Monitor Pro folds up to protect the screen during transport.
In addition, Field Monitor Pro’s case is comprised of an ABS / polycarbonate blend with structural walls that are almost twice as thick, and thus more durable, than regular laptops. Most laptops have wall thicknesses between 1.2mm – 1.5mm, but Field Monitor Pro has a cross sectional nominal wall thickness of 2.5mm.

Utility: A conventional monitor sits at a different eye level and angle than a laptop computer screen, making it hard on your auditors’ eyes. Field Monitor Pro is a perfect companion for a laptop, with its screen on the same viewing plane. And for desktop configuration, Field Monitor Pro can be hung to match any desired eye line. On the back of the device you’ll find the innovative stand that locks closed for travel and unlocks with the simple press of a button.

Here is a closer look at the top portion of the back, an area that gives you the option to hang the monitor on the wall. The Field Monitor comes in two versions. One includes a numeric keypad and is targeted specifically at accountants; the other is a few dollars less and has no keypad. Other than that, the two versions are exactly the same. In order to give as much flexibility as possible, the screen is attached to the base by a strong pivot. That allows you to choose the angle at which the monitor is used or, as previously noted, flip it around 180° and fold it back on itself. Here’s a stock photo of the field monitor used in portrait as if it were a picture frame. The standard can go a full 90+ degrees out from the device itself. In this photograph you can see how stable the screen is at pretty much any angle you choose. Clearly a great deal of thought went into designing this product so that it would be as usable and flexible as possible. And another shot of it from the back. The only other areas of interest are on the two sides. This picture shows the right side of the device. There you will find the power port for the included adapter, the USB cable port, and the on / off button On the other side you will find the brightness control and to spare USB ports which allow you to take the one connection to your computer and double it. In other words, when I had both displays connected to my MacBook Air I went from the two USB ports on the laptop to having four available USB ports.

This is a really great solution if you are living with a laptop as your only source of computing or if you do demonstrations. Imagine this scenario for a moment: You want to show a group of people something you’ve been working on. You plug one or two displays into your computer, set your display to be mirrored on to the other screens and then you can work on your computer while they’re watching what you do on the additional displays.

Finally, there is one other way that I can imagine using these displays, but I think I’ll share that for a follow-up post next week. 🙂

This is a great gadget, although the word gadget really doesn’t do it justice. This is a computer accessory that is intended for people who are serious about their productivity, would like to get some additional screen real estate or be able to share their display with others without too much fuss. Because it is designed in the same manner as a laptop, the screen is always protected during transport; because it has a pivoting stand between the screen and the base, you can choose pretty much any angle you like.

I will actually be using both of the demo units at the synagogue in a variety of matters, and I plan to do some follow-ups as specific uses become clear. The screens are certainly not inexpensive. At close to $300 apiece one could buy an inexpensive laptop for not too much more (or on sale for that price at times). But an additional laptop doesn’t serve the same purpose. These screens allow you to carry a small laptop with you and, when needed, find yourself working on a great deal more screen real estate than you would otherwise have available. I especially see these as something that people who choose the 11 inch MacBook air might want to consider. The 11″ MacBook Air is a phenomenal computer, but the screen is, at times, way too small. Have one of these available and you can choose whether you want 11″ of screen real estate or 26″. Now that’s flexibility!

What I Like: Easy-to-use; super flexible; highly adjustable; relatively lightweight and easy to take everywhere; to pass through USB ports mean you don’t lose any connectivity when using the screens; you can daisy chain numerous screens in a row when needed

What Needs Improvement: I really can’t think of much of anything. No, the display isn’t as sharp as my MacBook Air, but it doesn’t need to be. I’ve already found this set to be incredibly useful, and I suspect that I will find an increasing number of uses for them in the weeks and months to come. 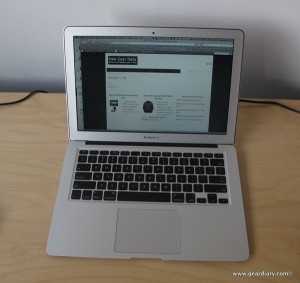 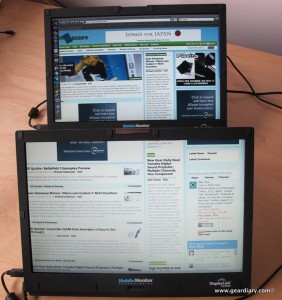