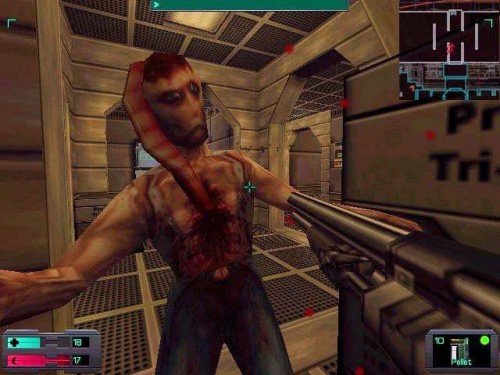 Today we get great news with the announcement that GoG.com brings greatest shooter-RPG System Shock 2 back, and that it is playable on modern PCs! Many younger gamers know System Shock 2 as the ‘sprititual inspiration’ for the Bioshock games, but System Shock 2 does so much more. It is a masterpiece of writing, gameplay, timing, environment, design, music and more.

What makes System Shock 2 such a milestone in gaming is the way it advances the entire state of gaming. You can play as one of three characters – the psionic power-wielding agent, the master hacker naval officer, and the combat specialist marine. Each character presents a unique play experience, as does your ability to advance as you make progress. Replayability requires more than just character advancement and skill choices – you need gameplay and writing as well. By wrapping tense first person shooter action around a survival-horror narrative, System Shock 2 grabs hold of you and never lets you go. The game was a must have in 1999, and has not lost its appeal in the 14 years since – I have played it at least a half-dozen time, and plan to take a ‘retro romp’ through the new GoG.com release very soon!

Here is the game trailer:

Head to GoG.com for more details and grab this amazing classic for $9.99!

Also this week GoG.com is having a special Valentine’s Day sale called Cupid’s Cupcakes, with games such as Deponia and The Dark Eye: Chains of Satinav on sale for up to 60% off!