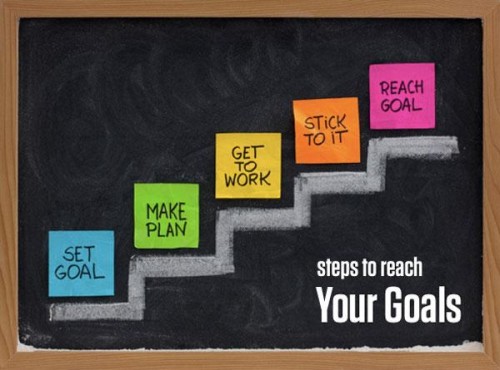 Way back around the start of the New Year, I commented that we should be setting goals, not making resolutions. The reasoning was that resolutions tend to be soft and vague, whereas goals have a number of elements that fall in line with the SMART system – specific, measurable, attainable, realistic, and time-based. If you are hoping to do something, the importance of setting goals cannot be overstated. So let’s take a look at how you can do it, and some results you might expect.

1. Pick a goal: It can be to qualify for the Boston Marathon, to compete in a full triathlon, to climb a mountain, or whatever. But the thing with goals – while you want it to be attainable, you never want it to be EASY. Easy goals are called ‘tasks’, and are what our weeks are filled doing.

2. Figure out a plan to get you there: Whether or not you tell anyone about your goal, suddenly you have that ‘oh no’ moment when you think there is simply no way you can reach this goal. That is when you need to formulate a plan, break it down into a timeline with tasks and milestones. Yes, I am saying that either explicitly or implicitly – you need to be the Project Manager for your goal, maybe even with a Gantt chart!

3. Find a connection: What is it about realizing this goal that will get you up at 4:30AM when you were up until midnight finishing a project? When you need to be awake on Saturday while everyone else sleeps in? When everyone else is watching the playoffs and you are working out? If your goal is to lose weight, is stepping on the scale each week enough – or do you need a reminder of what you can do when you hit the goal compared with when you started? Whatever it takes, figure it out early, and it will make reaching your goals easy (er).

4. Find a ‘buddy’: Some people have an internal buddy called ‘willpower’, while others thrive when someone else helps them along. Either way you need a second voice to help you out. That second voice will provide motivation, accountability and increase your determination.

6. Celebrate: If you have declared your goal and met it, people will be thrilled for you! You will get high-fives crossing the finish line, and perhaps people will ask about it the next day at work or school. But by lunch, you will be the only one still thinking about it – don’t take that as a sign you shouldn’t be celebrating! You put in a ton of work, you have earned the celebration! Keep it going as long as you want, and then … set a new goal!

The obvious example for me was running a marathon last year. I entered April weighing ~275+ pounds, and unable to comfortably run ~2.5 miles in 40 minutes … and I simply no longer enjoyed running. But I had told my brother I would run the Wineglass Marathon on September 30th, which meant I had less than 6 months. So what did I do? After a couple of weeks of running I signed up for the race! I was in no shape to do a 5k, let alone a marathon. But by the end of May I had run 2 5Ks and an 8K and had signed up for a half-marathon. I kept going, setting new weekly and single-run distance goals and working up to more than 50 miles per week every week. When my marathon came along, I ran the whole thing and knew I could have run faster, but was incredibly proud and satisfied – and got to setting new goals.

But that isn’t the only example – in 2007 I knew I was unhappy at my job, and the year before arranged an organization switch in the hopes of becoming happier … but it wasn’t working. So I said I would not enter 2008 working for the same company. And in September I got my resume out and arranged my first interview in over a decade – and then was swept out as part of a huge layoff. I credit the fact that I was already in the job-hunt mindset with helping me get to the point of having four offers all over the country within three months of the layoff even as the economy was collapsing. And because I had gone through goal-setting before I started, I knew what I did and did not want and value in a new job, which helped with the decision-making process.

Over at Greatist they looked inside Lululemon’s goal-setting mentality, and highlight a video of someone who set and met what seemed an impossible goal:

What goals have you set and how have you met them? Or do you have some ‘works in progress’ you would like to share? Let us know?