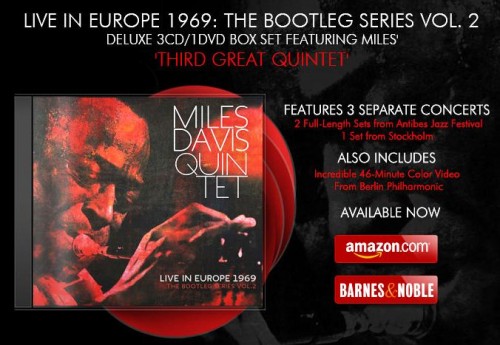 I have already complained about Sony for releasing so much posthumous Miles Davis material, but it is really a joke: because what they have been giving us isn’t gratuitous, but rather restored and wonderfully packaged discoveries or items previously only found on low-quality bootlegs. That was true of the 1967 Bootleg Volume 1, which made my ‘best of 2011’ list. And it is every bit as true of their latest release, Miles Davis Quintet Live In Europe 1969 The Bootleg Series Vol. 2. Let’s take a look!

Where to buy: Amazon MP3 Store

Artist: Miles Davis Quintet
Description:
Through the history of music there are stories of epic bands or musical pairings that were never recorded, or that were recorded but the quality is so terrible that it isn’t worth trying to discern the greatness of the collaboration. For a long time, Miles Davis ‘lost quintet’ has been high on that list, as they contained parts of the ‘In a Silent Way’ and ‘Bitches Brew’ groups as well as the ‘Live Evil’ and ‘Jack Johnson’ ensembles – but while they toured as a group for nearly a year were never recorded in a session released commercially.

The ‘Third Great Quintet’ features Wayne Shorter on sax, Chick Corea on piano, Dave Holland on bass, and Jack DeJohnette on drums. All of these musicians appear on ‘Bitches Brew’, but were also joined by many others. Wayne Shorter was the veteran of the group, playing with Miles since 1964 and already highly regarded young musician at that point. Chick Corea had success with his ‘Now He Sings, Now He Sobs’ album, and Holland and DeJohnette were very young and energetic players adept at both jazz and rock … exactly what Miles was looking for in his music.

These recordings come from two nights at the Antibes Jazz festival in July 1969, and a ‘Newport Jazz Festival In Europe’ performance in Stockholm in November of that year. On the Antibes recording Corea plays exclusively electric piano and the feel is very hard-hitting even on standards, whereas the Stockholm recording has newer material and is more advanced harmonically but feels more restrained in some ways with Corea jumping to acoustic piano at times.

The Antibes shows each start off with Directions, a concert standard never released on a major studio recording. The song represents the perfect foil for what Miles was doing – it swings, there is a clear head-solo-head structure, and yet it is harmonically open enough to jump between jazz, rock, avant-garde, and the ‘open space’ experiments of albums like Nefertiti and Filles De Kilimanjaro. DeJohnette drives the beat in a much different way than Tony Williams, and the interplay between DeJohnette and Holland makes for very exciting listening – and add in Corea and things get downright dangerous.

Over the course of the two Antibes concerts Miles steps through mostly established territory (recorded date in parenthesis) – ‘Round Midnight (1957), Milestones (1958), Footprints (1966), The Theme (1955), I Fall in Love Too Easily (1955), and so on. There are some recent additions, including Miles Runs the Voodoo Down and Sanctuary from the Bitches Brew sessions, but what is most impressive is the interpretation of these pieces of music. New and old fit together naturally, old songs become new, familiar melodies are deconstructed and re-imagined and nothing is simply done without reason.

The Newport Jazz Festival In Europe concert is a bit strange for me, because while excellent in playing and audio quality it feels subdued compared to the Antibes music – that despite coming several months later. The show begins with Bitches Brew, which starts with Corea and Holland playing funked up electric instruments, but each returns to acoustic before the halfway point and the song is transformed into a hard-swinging affair with only an occasional to the source material. The same is true with Paraphernalia – the low-key shuffle beat from the original (featuring George Benson, no less) us gone, and we have a solid swinging exchange that would not be out of place on the 1967 bootleg recording!

Another thing I found interesting was that Wayne Shorter was still playing straight jazz in the idiom that served so well in the Miles quintet from 1964 – 1968. This style works amazingly well on Paraphernalia and his composition Nefertiti and makes his style fit perfectly for the entire Newport Jazz Festival In Europe concert. However, because Miles had already moved on, and brought the fusion-before-it-existed rhythm section of Holland and DeJohnette along with him, augmented by Corea who would alternate between jazz, avant-garde, fusion and dense Lennie Tristano-like progressions at will … Shorter’s solos often feel extraneous and out of place on the Antibes concerts. It isn’t bad, but you can hear the band down-shift to make it all work.

‘Quick Hit’ Song: “Footprints” (from CD #1) – as always, Miles calls for the song by playing a melody fragment and the band quickly follows suit, leaping into a 11.5 minute version that flows amazingly well throughout. Each instrument is handled entirely differently than on the original – DeJohnette suggests where Williams would have demanded, Holland floats where Carter pulsed, Corea dabs colors where Hancock would have laid our broad harmonic strokes … but the biggest change is Davis. As my older son quipped, it sounds like he starts approaching the phrases legato, but suddenly he is attacking the notes … (my younger son joins in) like he is hitting them with a crowbar. Exactly – this is Miles at the height of his trumpet-playing powers, and it needs to be experienced.

Would I recommend?: Absolutely! As I said, I keep complaining about the constant releases from Sony, but once again here is one that is an amazing find. Gorgeous music from a band under-represented in the Miles Davis library.

Suggested audience: You don’t need to enjoy Bitches Brew to like this, but it helps. If you enjoyed Miles Smiles and the earlier 1967 Bootleg concerts you will definitely enjoy this!

Here is video of the quintet performing the medley of It’s About That Time / Sanctuary / The Theme live July 25th, 1969 at Antibes, France: