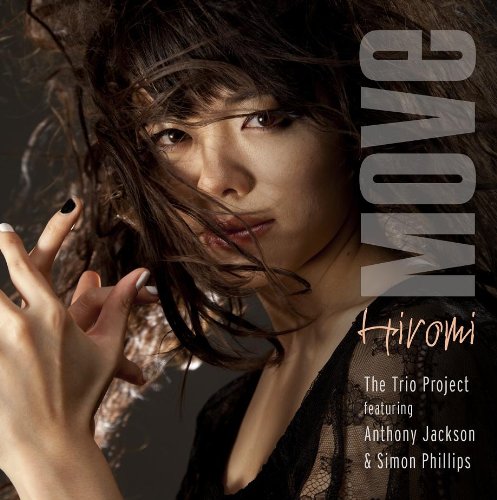 I have already covered other works from Hiromi Uehara over the past few years, including her 2011 release ‘Voice’. That was a great record that featured the same trio as on Move, with bassist Anthony Jackson and drummer Simon Phillips. It would be easy to call this recording ‘more of the same’ or evolutionary, but is that a fair description? To find out, let’s take a journey with the Hiromi Trio Project ‘Move’.

During the recording of Voice, Hiromi connected with Jackson and Phillips in a deep musical way that inspired her. Whereas Voice was her songs played in a trio setting, Move was written based on the inspiration from Jackson and Phillips. Hiromi states that she felt an intimate musical connection, that ‘Voice’ was more a fun project than work because of it, and that Move was a celebration of a day in the musical life with this trio.

Anthony Jackson is a tremendously skilled bassist who is credited with the invention of the six-string bass in the early 1970s, and had one custom-built for him. He has been prolific as a sideman in jazz, rock and pop music, including Roberta Flack, Paul Simon and many more. My first exposure to his work was on Al Di Meola’s ‘Elegant Gypse’ from 1977, where he was featured on “Race with Devil on Spanish Highway”. Simon Phillips has also been a major sideman since the 70s, playing with Tears for Fears, Michael Schenker, Judas Priest, Stanley Clarke and others. My notice of his incredible playing was in 1980 when he was simultaneously drummer for Pete Townshend’s ‘Empty Glass’ and Jeff Beck’s ‘There and Back’.

I mentioned I had reviewed some of Hiromi’s earlier work. In late 2011 I reviewed Voice, calling it ‘my favorite work of hers to date’. In 2010 I included two recordings featuring her in an article: she was part of Stanley Clarke’s ‘Jazz in the Garden’ trio, which was a great recording of her with masters Clarke and Lenny White. She also released her solo recording ‘Place to Be’, but I was less enamored of that one, finding her dipping too often into the excesses of her prodigious technique to the detriment of the music.

From the very start of the album you are immediately drawn into the tightly arranged tense fusion-tinged themes of this ‘piano power trio’. I have seen the expression ‘jazz power trio’ before to describe a group playing at once in the jazz tradition and with the explosive ferocity of a rock trio such as Rush or Triumph.

‘Move’ starts with a percussive piano stab, is quickly joined by the bass and cymbal, then opens up into a syncopated riff in a very fusion-esque time signature. Even the theme is reminiscent at times of something from Return to Forever. Within the first few minutes you learn everything you need to know about the trio and the album – they can swing, they can groove, they can rock, and they can play anything. Not just that, but they play it with passion and emotion and constant interplay and communication – you can really sense the fun they are having making this music.

My sole criticism of Hiromi has been that her prodigious technique can at times eclipse the soul of the music. In settings with elders such as Chick Corea or Stanley Clarke that isn’t an issue, but even on Voice I heard it at times. However, on Move she is completely in touch with the rest of the band at all times – even when she is playing at her ferocious best, Jackson and Phillips ramp up the intensity so you are swept up in the experience.

After a flat-out romp like Move I was concerned that the album would be one-dimensional, but as the group has matured they have added tremendous depth and sensitivity. Brand New Day is lyrical and introspective, with plenty of space left by the trio. Endeavor is a fun and funky fusion romp with a dripping-wet filtered analog synth adding humor and counterpoint. Rainmaker combines sensitive play and directed funk mixed with lightly swinging grooves in a very effective stew.

The highlight is the ‘Escapism Suite’, which pretty well encompasses everything Hiromi brings to the album in terms of compositional styles. ‘Reality’ starts off like what could be a searing guitar-fusion piece with an incredible level of intensity and musicianship by the whole trio, before dropping into a gorgeous swing section with Hiromi taking her best solo of the album. ‘Fantasy’ has Hiromi playing a more relaxed support role while Jackson changes up his tone to give it a more guitar-like lead style and plays a beautiful melodic line that Hiromi takes up after a few minutes. ‘In Between’, as you might expect, works between the two modulating back and forth. Upon repeated listenings you will notice recurring themes and chord structures shared between all three movements.

The album closes with the most introspective song ’11:49′, an 11 minute reflection on everything else the band has played thus far. Hiromi describes it as that part of the day when you look back on what has happened and what you have planned for the next day, and the group really delivers it musically.

‘Quick Hit’ Song: “Move” – as I mention, this song gives you everything to expect in terms of solid jazz feel, heavy fusion musicianship, syncopation, frenetic unison lines, and a great composition that allows all of the musicians to shine while never failing to serve the greater purpose of delivering a high quality musical experience.

Would I recommend?: Absolutely! In 2011 I called ‘Voice’ my favorite Hiromi work, but with Move she has raised the bar considerably. It is by far my favorite Hiromi album, and contains some of the best stuff I’ve heard from both Jackson and Phillips. The trio works together incredibly well in a way you might not expect. For such skilled musicians there is no conflict, only cooperation.

Suggested audience: If you like high energy jazz tinged with rock and Latin themes, you definitely want to check this out. Hiromi is relentless, but she delivers a solidly musical experience that lovers of jazz, fusion and instrumental rock will enjoy.