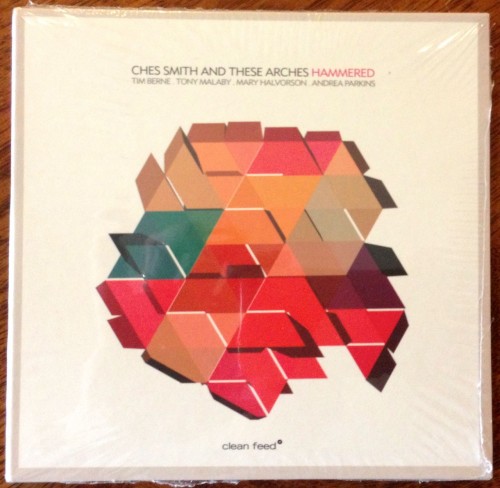 Ches Smith caught my attention as drummer for Mary Halvorson in her various projects, so when I heard he was releasing a new album I knew I’d have to check it out. The project features familiar names as these artists often help each other out, but the instrumentation is non-standard and the songs and arrangements don’t necessarily suggest a drummer-led band. Let’s take a listen to Ches Smith’s These Arches Hammered!

Where to buy: Clean Feed Records (Currently CD only through the site)

While my knowledge of Ches Smith comes from the progressive jazz circles, he also has a number of rock projects going, and his ‘Ches Smith and These Arches’ collective is somewhat of a confluence of all of those influences and compositional styles. The group plays a collection of eight Ches Smith compositions that reflect his influences and variety of projects. The instrumentation is non-standard for pretty much any genre, with Tim Berne on alto sax, Tony Malaby on tenor sax, Mary Halvorson on guitar and Andrea Parkins on accordion and electronics. 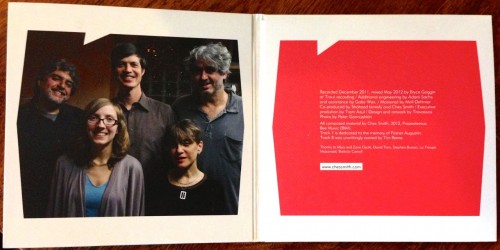 The compositions from Smith take you on a journey through jazz and rock and the improvisational space between. At times I felt I was hearing Masada, John Zorn, Anthony Braxton, and more. An obvious part of this is the presence of Tim Berne on alto sax. Berne is a veteran free jazz bandleader, who has always melded funky beats, free jazz and ‘noise’. He is an integral part of the New York creative music scene, and plays a strong role in shaping the sound of this recording. The interplay between Berne and Malaby is incredible, as the pair will alternately clash and complement, and always keep things distinct and interesting.

Beyond that, it is Smith’s choice of instrumentation that has a major sonic impact. The group has two saxophones, guitar, accordion and drums. No trumpet, no piano, and no bass. The accordion provides some amount of piano coverage, but it is a sonically unique instrument that is generally linked to happy and corny music that it is actually disconcerting in a more serious setting – in a good way. You will find yourself listening more intently as if there was something subversive about the presence of the accordion.

That leaves Halvorson and Smith. Halvorson remains enigmatic, mixing her signature fragmented lines with basic strumming and some hard-edge power chord work on songs such as the title track. You will never mistake her for a rock guitarist, but she brings an amazingly effective hard edge and brash tone to the songs as needed. Smith is a powerful yet sensitive drummer who can fill a space or leave it wide open. As a composer he thinks of things holistically, meaning there is little impact for the drums at certain points during the album – but he always adds color with percussion and cymbals.

Most of the songs are fragmented between different sections, so that rather than flowing from intro to verse to chorus and so on, you have a very loud and syncopated section suddenly turn quiet and introspective, then swing and suddenly leap back into the original flow as if it had never stopped. Only ‘Limitations is a ‘free floating’ experience that stands in stark contrast to the hard-edged approach of the rest of the songs.

This makes for a unique listening experience that works very well because of the unique set of musicians and harmonic structures of the songs. There is beauty throughout, but it is delivered in a stark and often hostile package that takes time and caring to unwrap … but it is worth the endeavor. 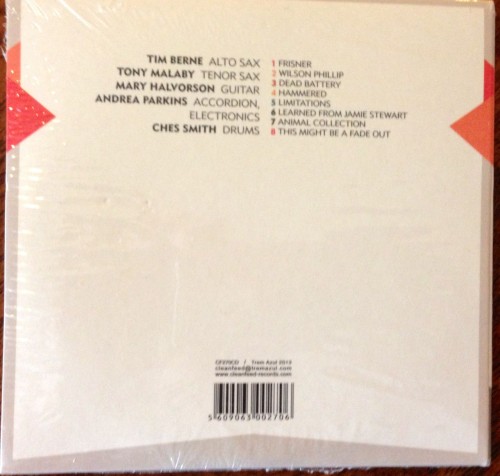 ‘Quick Hit’ Song: “Frisner” – My recommendation is a test … if you can make it a full two minutes into this song, you will enjoy the entire album. While that sounds like a joke, to an extent it is true: the song starts out with arhythmic and atonal fragments, moves into a quieter segment, picks up pace and volume, but never really allows you to relax in any one place.

Would I recommend?: Absolutely! But again, let me be clear – this is not mainstream jazz, it is not always ‘comfortable’ listening, and it will push the experience of most who give it a try. But in my opinion it is very much worthwhile.

Suggested audience: If you are a fan of John Zorn, Masada, Anthony Braxton, or other works by the members of this group you will certainly enjoy this. If you found Ingrid Laubrock’s music ‘too much’, you might want to steer clear.

Here is video of the group performing ‘Hammered’ in August 2012 at Barbes: