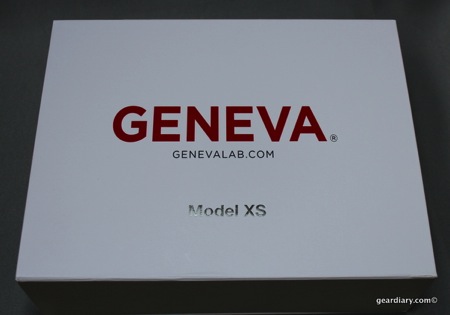 Geneva Sound markets the Geneva Sound System Model XS as “the world’s first portable audio system with true Hi-Fi sound”. That’s a pretty daring claim to make and one that can easily be dismissed as a good bit of hyperbole. Does this Bluetooth speaker whose design is inspired by the classic travel clock, truly sound like something much bigger and more expensive? We couldn’t wait to get out hands on one and find out.

We did get one for review, and were immediately impressed by the sturdy leather-like clamshell case. It really does look like the travel alarm clocks of old. Closed it has the appearance of a small, leather-like box. Flip it open and pull the speaker unit forward at an angle and you get a triangle of sound. Yes, as Geneva Sound notes it is “a stylish accessory small enough to slip into any briefcase” but that still leaves open the question of sound. What did we think? Read on. 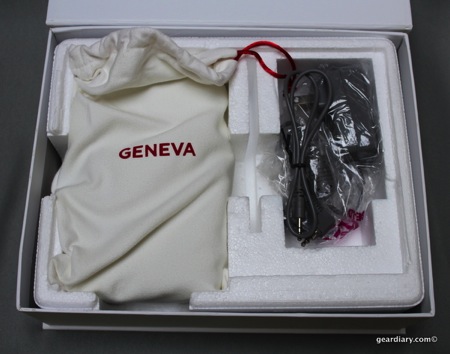 When the Geneva Sound System Model XS review sample arrived, I was impressed by the packaging. The medium-size white box opens to reveal the included accessories and a cloth pouch. There I found the AC power adapter with cable, a rechargeable 2700 mA lithium battery, and an adapter cable with a 3.5mm plug on either end for creating a wired connection to an audio source. There was also a large white pouch in which I found the Model XS. Yes, without question the presentation was worthy of the $250 price tag. 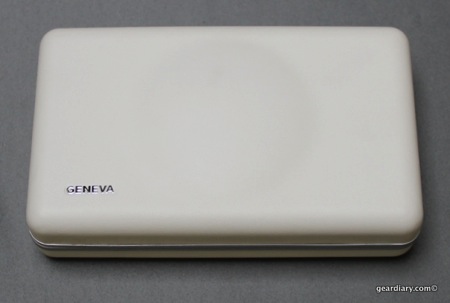 The Model XS is small. Weighing in at 1.1 pounds, it is just 6.2” × 4” × 4.5” when open. Obviously it is small when it is shut. Inside that speaker unit are two 1″ tweeters, a 2¼” woofer and a power amplifier that pumps out a total of 12 watts. The Model XS also packs an FM Radio inside. Connectivity between the audio source and the Geneva Sound System Model XS is achieved in two ways. You can either use the included 3.5mm cable to create a physical link between the devices, or you can connect wirelessly using Bluetooth. I was surprised to find the company used Bluetooth 2.1 when so many of the speakers I have reviewed recently ship with Bluetooth 3.0 or 4.0. It really makes the Model XS feel a bit dated. 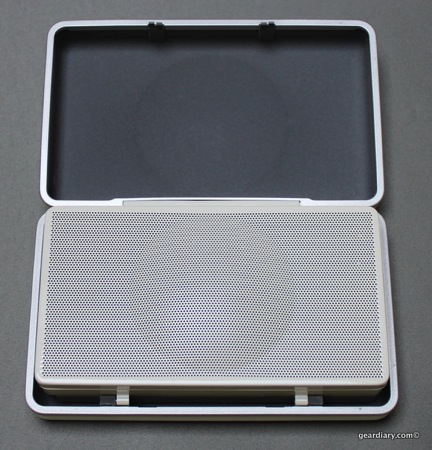 There is no question the company built the Model XS as a statement of style. As they explain,

Never before has a Hi-Fi system been integrated into a case designed for a travel lifestyle. Geneva Sound System Model XS solves this problem with simplicity and elegance. It hides the speakers, amplifiers, radio, and alarm clock inside the case, covered in a choice of Geneva’s trademark red, white or black finishes. 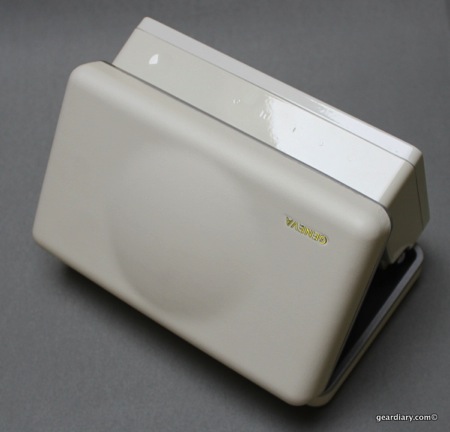 It does look nice, but time and again I found myself wondering if the added weight and bulk of the retro-style case was worth the aesthetics. Honestly I would take a smaller and lighter speaker over the added style and bulk any day.

Another way the Model XS looks great is the way in which the mode and time indicators are integrated. There is no clear display on the front of the Model XS. Instead, lights behind the speaker grill illuminate and indicate tine or function. It looks great, adds a neat effect to the speaker, and it maintains the clean lines of the Model XS. 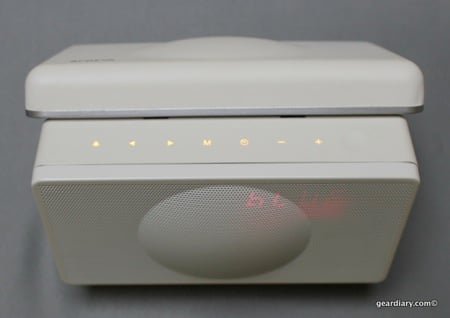 Another way Geneva Sound kept the clean lines of the Model XS was through the use “TouchLight controls” that are backlit and touch-sensitive. I didn’t find this to be nearly as good a decision, since I actually had to read the user manual to figure out how to use the buttons. That’s not a good way to begin using something that should be as simple as a Bluetooth speaker. In addition, on the occasions when I used the Model XS as an alarm clock I found it rather challenging to touch the correct TouchLight button and silence the alarm. More than once I found myself raising the volume in a rather disconcerting manner. If I am using an alarm clock ,I want the snooze or off buttons to be large, easy to find and “sleepy-head safe”. That is not the case here.

The other thing that occurred to me as I was trying to decide why I wasn’t “Wowed” by the Model XS, was that I didn’t really see the need for the inclusion of a clock radio in a speaker at this point. After all, the speaker has Bluetooth (albeit a dated version). That, in turn, seems to expect that the person using it has a smartphone. Smartphones, in turn, not only have clocks, but they also offer a wealth of different options when it comes to alarm clock functionality. In other words … I don’t need an alarm clock in my speaker because I already have one. I will admit to wondering if I was being too hard on the speaker, so I asked Elana and my in-laws what they thought. They were unanimous that, now that they all have iPhone, the clock functionality was redundant. 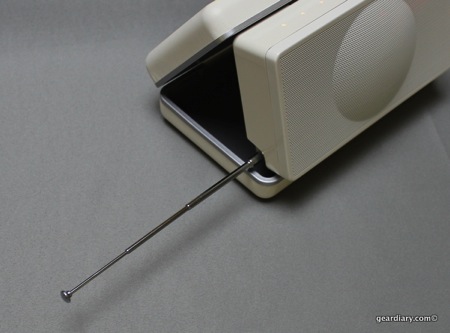 The inclusion of an FM Radio is another dubious choice that adds to the sense that the Model XS is dated. Elana listens to terrestrial radio a great deal but, since getting an iPhone, even she is streaming her radio programs from the internet. If you have a Bluetooth speaker and a smartphone, there is really no point in having FM radio. And then there is the antenna. It extends from the side . [Correction: My review sample seemed to be stuck and that last bit that allowed for angling did not come out. Still, the location on the lower side of the radio is simply asking for trouble.] It is cumbersome, makes it more likely it will, at some point, get broken, and it is limited in its ability to get the best reception possible. That, in turn, makes it more likely someone listening to radio might want to opt for a streaming solution. 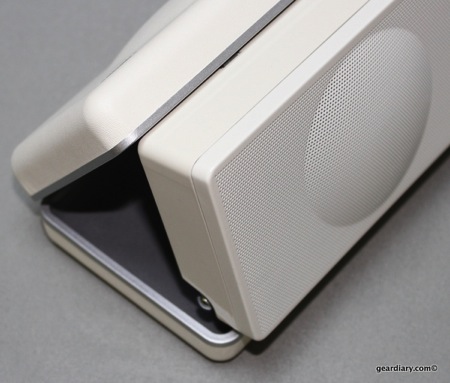 Finally there is the sound. The company writes that the Geneva Sound System Model XS “is not just another clock radio; it is a portable high-fidelity sound system!” That is a bold statement and one that needed to be challenged. I listened to the Model XS on its own and then switched between it, other Bluetooth speakers and some of the larger systems I have at my disposal. The Model XS certainly didn’t sound as good as my Sonos system. Then again they aren’t the same animal. The situation was different with the Bluetooth speakers. Still, it was not a complete win for the Model XS. It sounded good and was better than many of the less expensive speakers we have for testing, but when compared to some of the more expensive speakers it didn’t stand out. It wasn’t bad but, for example, it didn’t blow away the sound coming from the MiPow Boom. That wouldn’t be an issue except for the fact that the Model XS is almost twice the price and gets just 5 hours of runtime compared to the Boom’s 19+ hours. Moreover, the Boom packs in Bluetooth 4.0 and doubles as a speakerphone. In other words, to me the Model XS simply didn’t justify the $250 price tag; the more I used it, the more I felt that it was a case of form over function.

If you like the retro style of the Model XS, still rely on over-the-air FM radio, or if you need a travel alarm clock other than your smartphone, then you might want to take a look at the Model XS. If the previous items aren’t on your short list of features for your next Bluetooth speaker, then you’ll want to look elsewhere. You can learn more on the product page.

What I Like: Cool retro style; Get audio via Bluetooth, FM and a wired connection; Cool hidden display

What Needs Improvement: Bluetooth 2.1; Case adds bulk; Antenna sticks from the side; Clock functionality is so very 2003