Posted By: Michael Anderson May 27, 2013
ShareTweet 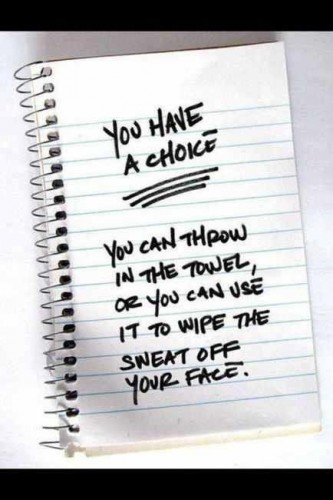 I love to run.

Yesterday coming out from food shopping with my wife, I saw a lady lose a cucumber and a few tomatoes out of her cart. I left the second cart (I have two teen boys) with my wife, chased down the produce, and then ran to catch up to the woman to return the items, and then jogged back to my wife. She was talking to some other folks who remarking on how nice I was – and she noted that while I AM nice, and that is why I did it, I like to run around like that for fun anyway! Running at 4AM is one of the highlights of my day, and one of my great joys in life; I always feel great after, and being in such great shape means I am always feeling good and am ready to go with plenty of energy. Running impacts every corner of my life in terms of positive energy and positive outlook – I love to run. Every year around this time I am reminded of running as something I LOVE rather than something I just ‘DO’ … more on that later.

And while the majority of the last 24 years have seen me out in the morning for some sort of jog/run, there was a period where I ‘lost that loving feeling’ for running. My thyroid took an ugly nose-dive in late 2007 (around the time I got laid off, was jetting around the country interviewing and preparing to move the family to Corning), and as a result my energy and drive similarly bottomed out until I got diagnosed and medicated in the spring of 2008. From there the weight came off quickly, but for whatever reason I chose to enroll at the local gym rather than just running. As fall arrived, and the kids’ schedules made gym time inconvenient, I tried to get back to running … and I failed.

In fact, for the next 3.5 years I would repeatedly try and fail on a variety of occasions to restart running. We had long since cancelled the gym membership, since none of us used it, and the reality was that I spent much more time NOT running than I did running. Which for me tends to spiral into my eating habits and then weight gain. Suddenly it was spring of 2012; I had gained about 75 pounds since quitting the gym, and the marathon I promised to run with my brother was only 6 months away! So I forced myself to get up and get out running, and the rest I have written about several times. I didn’t love running those first couple of weeks before I got serious … but suddenly I found my rhythm, and I don’t ever want to let it go.

But do you know what? In my house I have three people with no interest in running whatsoever. Two with lousy joints, and one with no interest. There are MILLIONS of people who don’t like to run, and some of them even go out and do road races! A coworker from my last project was going to take up running even though he hated it … but I think that was more about his competitive nature not liking seeing me going from much heavier than him to much lighter as he struggled to lose some extra weight.

What I see with him, and with so many others, is the ‘all or nothing’ approach. He wanted to hop on full-speed in spite of having repeatedly injured ankles and knees playing basketball through the years. And of course, the first time he tried, he did too much and was hobbling around the next day. The thing is, fitness and weight loss are not ‘quick and easy’ – running 10 miles in one day when you are not ready is NOT the same thing as running 2 miles a day for 5 days.

That said, fitness IS a choice – it is a choice you make for positive change in your life in terms of what and how you eat as well as the activities you engage in. At the same time it is important to remember that it is an individual choice – no two people are alike, so it is important that you are making the right choices for yourself, not trying to do what you see someone else doing.

As an example, there is an older guy in our neighborhood who is out walking pretty much every morning. He is overweight and has some health issues, but he is doing what he can and walking a couple of miles every day, sometimes with his wife, other times with his dog, but always at a healthy pace. I applaud his effort – he has made the choice for fitness.

I mentioned that this time each year I am reminded of my love for running – and actually back in Massachusetts it would always start right around Patriot’s Day, as the coming of the Boston Marathon would meet with loads of people making a commitment to running, perhaps to becoming marathoners. Within a week those numbers shrink greatly, and before labor day I was pretty much all alone on the roads again. Here in western NY it starts a couple of weeks later, but whereas a month ago I would see a couple of dozen people on a weekend mid-morning run … this weekend I saw 3 – and two were together! And my 4AM runs? I am back to running alone the entire time again.

These are not people who love to run – they want to do it, perhaps as a sort of a delayed New Year’s Resolution that kicks in once the weather gets better but fades as quickly as any other resolution.

But while it is sad to not see people out enjoying their runs, what is sadder for me is that most of them have probably abandoned concerted attempts at exercise until next year. Instead, they should be finding out what THEY love to do and pursuing THAT! My son who I think would be a great runner has discovered a love of biking with his friends, and they will all meet up at one at the other’s house and ride around each weekend for extended times … it is GREAT, and I love seeing him getting all of that activity, particularly in a social setting that is so positive.

At my work there is an ‘Activity Challenge’ going on right now. Formerly a ‘10,000 Steps’ challenge that ran twice a year, now they focus on getting people active in whatever possible way. The local YMCA is involved with discounts for pool use and free use of the gym, there are biking groups, open sports such as basketball and volleyball at the R&D center, and ‘conversion’ tables that get your biking, hiking, running, swimming and more into the table so your activity is tracked.

It is awesome and absolutely the right way to do things. The focus is on getting everyone moving – as my son’s doctor says, the focus is on ‘activity’ rather than the potentially negative sounding ‘exercise’. And already the program is being heralded as the largest yet!

I am not old – but neither am I very young – and as we were snapping pictures of the 24 kids assembled at a neighbor’s house for the recent Junior Prom, I had folks commenting on my running. Some were pulling out the ‘at my age … ‘ excuse, to which I simply said “I love to run, everyone has to do what works for them.” Lisa mentioned her Striiv and doing EA Sports Active on the Wii, and how much she enjoys that, and how it all works with her joints and bone issues.

The reality is that the ‘I’m too old’ excuse is just that … an excuse. Over at AARP there is a great article that points to the best physical activity – running. The article notes that the best approach is moderate activity level a few days a week. In other words – don’t worry about pace, just get out there and do what you can and keep your body moving.

Ultimately we all know that some form of activity on a regular basis is important to keep all of our bodily systems functioning in the best way possible. I know that my body responds to exercise by wanting healthy food, and I have heard the same from others. But for some it is an extra effort to coordinate eating and exercise. All I can say is that you have a choice. Every day you have a choice between sitting on the couch or putting on your iPod and walking around the block. You have the choice between foods you know to be unhealthy and those you know are better for you. Even substituting healthy options at one meal to get started will make a difference.

You have a choice … make the choice for fitness, and for health. You will thank yourself in the end.