Posted By: Michael Anderson May 31, 2013
ShareTweet 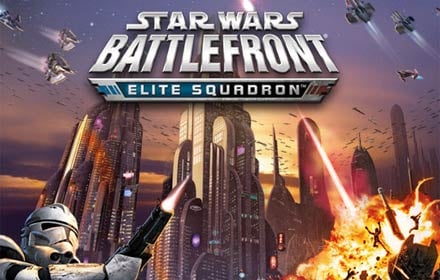 In the late fall 2005 after the PSP had been released for about six months LucasArts released Star Wars Battlefront II on a variety of platforms including the Sony PSP. The PSP version was a solid enough shooter but definitely lacking in depth and execution compared to other platforms. In 2007 came the PSP-exclusive follow-up Renegade Squadron, and finally in 2009 there was a DS/PSP game Elite Squadron. The final game was released as interest in the PSP was waning, folks were getting ready for whatever was next, and smartphone gaming was on the rise. I hadn’t played in nearly 4 years … so how does it hold up?

Description:
Here are some of the features:
* Commandeer trademark Star Wars vehicles and spacecraft from the Empire’s TIE Fighters to the Rebel Alliance’s X-wings, as well as AT-RTs, LAATs, Imperial Transports and Droid Fighters.
* Outfit your character like never before. Dictate their battle weapons, armor, species, gender, appearance and physical strengths including hundreds of unlockable items and bonuses.
* Feel the rush of combat on the PSP system with 16-player multiplayer matches complete with enhanced stat tracking.
* Play classic characters like Luke Skywalker, Obi-Wan Kenobi, Kit Fisto, Darth Maul, Count Dooku and Boba Fett, plus new characters from the Star Wars Battlefront: Renegade Squadron and Star Wars: The Force Unleashed video games.
* Battle on some of the most iconic Star Wars planets and locations from the feature films, all with multi-layered battlefronts, such as Tatooine, Endor, Yavin 4 and Hoth through 12 campaign levels. 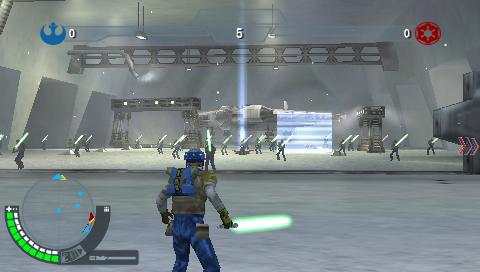 Since I was a strong PSP advocate since the system launched and also a huge Star Wars fan, it is not surprising that I jumped all over this game. It offered loads of promise – a story-line deeply tied into the period between Episode III and Episode IV, loads of characters you can choose for multiplayer, and tons of customization.

The game has the analog stick as your primary source of motion, with the face buttons triggering various weapons, the direction buttons switching primary weapons, and the L and R shoulder buttons used to lock on to enemies.

You will find yourself running around shooting droids and clones, mounting up AT-ST and other ground-based vehicles, and engaging in space battles in all sorts of fighters and bombers. The diversity of action and integration into known settings are the strong points of the game. In particular, the ability to transition between land in space during a level, to strafe the ground from the air and take out landing ships and so on. It really opens up the gameplay.

However, compared to Renegade Squadron, there is a lack of breadth in vehicles. You lose the speeder bikes and get fewer starfighters per team in multiplayer. There is plenty of customization, but you won’t notice it for a while – most items need to be unlocked, so starting out what you see is just a list of class load-outs that amount to a few more weapons and armor than in Renegade Squadron. 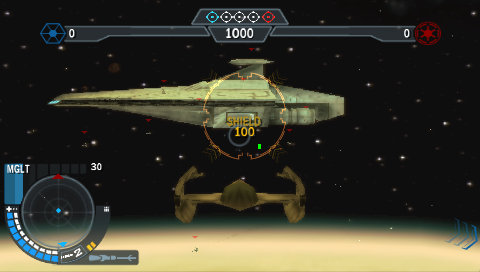 If someone was to ask ‘name the top problem with the PSP, I would immediately answer ‘lack of second analog stick’. As a shooter fan, I was constantly struggling with the controls being unresponsive … whereas in space combat I had the exact opposite issue. You can tweak ALL of the controls extensively, and eventually I got to the ‘good enough’ level – but never really ‘good’.

Once you go through the tutorial you know pretty much everything about the game, and the rest is just refining your skills. As for the story – you are not here for the story! It is a very weak scenario, but in a Battlefront game you are here for the multiplayer!

Would use again/recommend?: As with many PSP games … it depends. If you have a PSP and are a big Star Wars fan looking for a shooter, I consider this one to be the BEST available. It is $20 on Playstation Store or Amazon, and if you can get past the controls you will get hours of enjoyment.

At the same time, the game is chock full of PSP-centric flaws – load times are too long, load zones too small, controls are inexact and insufficient, the trade-off for performance means graphics are somewhat muddy and indistinct.

I guess the fact that I haven’t played the game in nearly 4 years, and had actually forgotten about it tells the tale.

Here is my review: