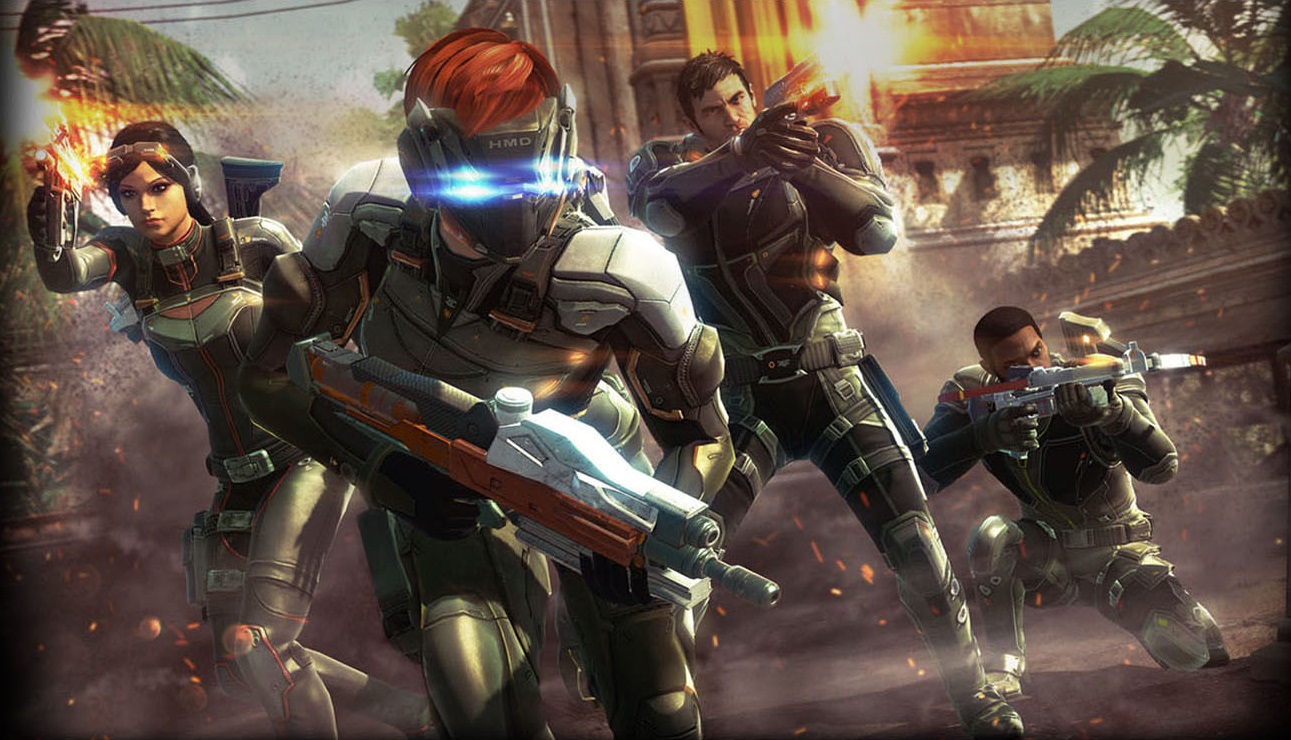 NOTE: This collaborative review was co-written with our special correspondent Wayne Beck.

What happens when human beings access powerful alien technology they were never meant to have been exposed to? When a volatile energy source they call Fuse falls into the wrong hands, the CIA calls upon an elite contact team to retrieve it, known as Overstrike 9. Huddle with up to 3 friends in team-based co-op play as you take down the rogue paramilitary corporation behind the theft. Use lethal teamwork, orchestrate devastating attacks, and provide cover for one another with fringe-tech weapons and gadgets. The unique LEAP feature lets you instantly shift from agent to agent during combat, allowing you to take advantage of each one’s special arsenal. You will need your partners and their arsenal to stop a global arms race from spinning out of control.

“A new kind of arms race is about to begin.”

Developed by Insomniac Games and published by Electronic Arts, players can light their Fuse by taking harnessing alien technology then combine their team’s abilities, upgrade weapons and unlock more abilities.

The title refers to the alien technology, but also the game’s mantra for player cooperation. There are no competitive multiplayer modes, which is a refreshing change. Working together is the key to this game, so fuse together with teammates (AI and real players) to succeed. 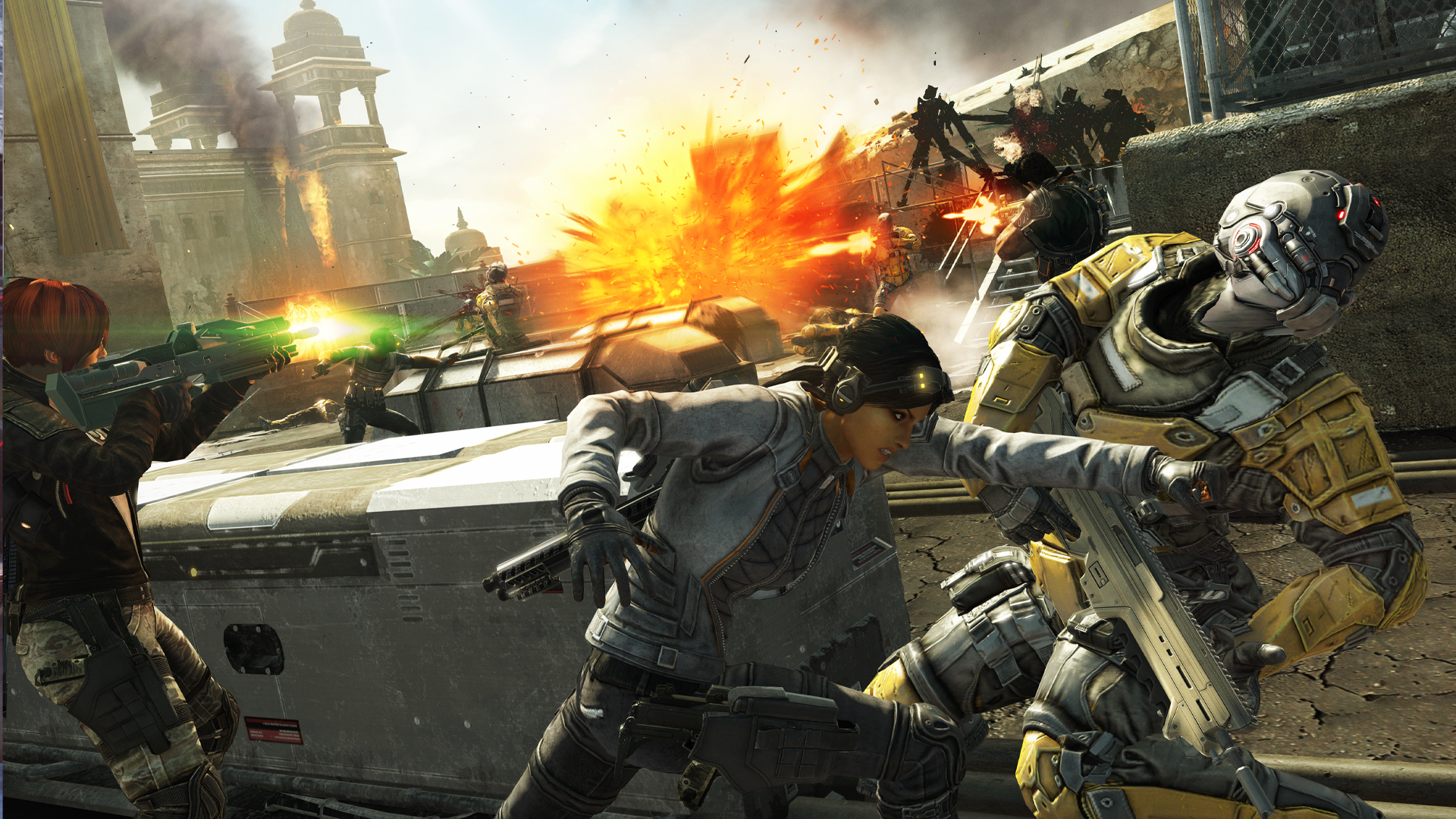 The LEAP feature is ideal for reviving other teammates, switching when low on ammunition, and other strategic movements like flanking, surprising, and overwhelming greedy enemies trying to take the technology, namely the rogue paramilitary group called Raven. Players cannot use Leap when injured or if playing with three other human players. 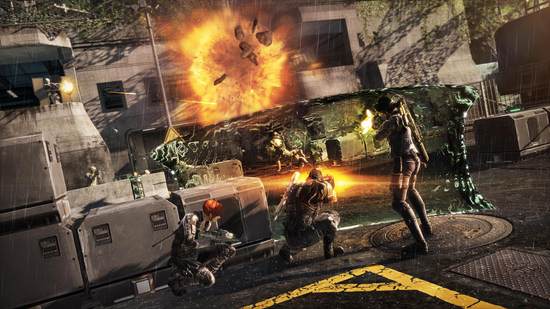 Learn those fuse weapons and conquer the levels. Teamwork is much better trying on your own amid three other teammates and letting their talents go to waste.

Players miss opportunities if they only rely on their teammates for reviving their health. Invite friends into the fight for even better results. Teamwork battles require special strategy and smarts. For example, have a teammate (or yourself) throw grenades behind an enemy group with shields while teammates on the opposite side keep firing.

The AI picks up tactics and strategy very well. Players can see green outlines of their teammates in the environments. The enemy AI works fairly well and usually stays in tight group formations, which creates several challenges.

Each member of this cool quartet (named Overstrike 9) has unique abilities and you can switch among the four at any time…perfect for when low on ammo. For example, use Dalton or follow his AI version around because he has his own special shield (a.k.a. mag shield), so players can get behind him in big firefights. This special shield absorbs enemy fire/bullets, which can all be fired back at the enemy. 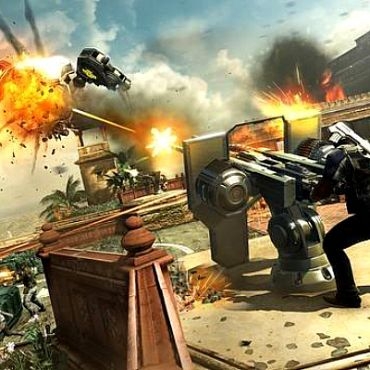 Players can always choose their playing style (e.g. stealth, full on assault, etc.) without compromising their progression in the game. Gameplay does not limit players to one style in certain scenarios and always offers constant resources and upgrade opportunities. Find XP points, game currency, and ammunition on surfaces and in separate rooms among the action-packed scenarios.

No detailed puzzles here just targets to shoot. Players can easily conquer listed objectives by making carefully visual observations while the text reinforces the required action to progress through levels.

The impressive visual effects and sound elevate the overall environments, which do not really break any new ground. Players reach checkpoints to progress plus the co-op play includes leaderboards, lobbies/matchmaking, messaging/friend invite in, and voice chat.

Fuse only requires 160 KB of hard drive space, which increases the appeal to add this action filled game to a game library. The instruction manual is on disc if needed, but most players, especially action game veterans, can jump into this solid experience without many issues. The co-operative mechanics offer great excitement and discovery while the varied challenges, upgrades, and special abilities/weapons raise the replay value to a very high level. Also available on Xbox 360.

is available at Amazon and from other stores.