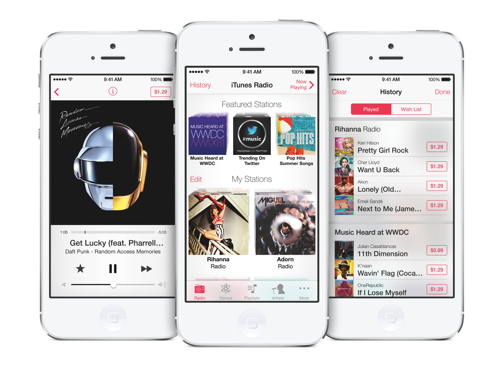 At the WWDC keynote, Apple announced the revamped music player app for iOS 7 and along with it iTunes Radio. While you can check out the press release for the full details, suffice to say that this is more of an ‘internet radio’ like Pandora than an ‘on demand’ service such as Spotify. Obviously there is more to it than that, and there is still a great deal for us to learn. But for now let’s take a look at how everything works, and I will predict some winners and losers!

The way Apple showed off iTunes Radio was as an extension of the Music app on iOS, but it will also be part of iTunes going forward. Similar to Slacker or Pandora, you can choose from curated stations featuring songs according to genre, taste, season, or other criteria. You can also auto-generate a station based on a song in your library or anything you choose to search. You can skip songs or go back to the beginning of a song, but since this is not ‘on demand’ you cannot simply select a song by searching. There are limits to skipping, at least based on some early tests people have done. Reality is we don’t know yet.

Pandora is famous for having their ‘music genome’ to make smarter and deeper stations based on your tastes. Unless your tastes are like mine, in which case their selection can be summed up as ‘you like music? we play music!’.

Apple has said that it is using ‘intelligent data processing’ to better cater to customers and learn over time. What isn’t clear is HOW Apple will work with the music data to provide suggestions and playlists – especially when multiple family members use the same iTunes account, but their Genius playlists probably provide a clue. And for me it is a mixed bag – but better than Slacker/Pandora which as I have documented always have a ‘3 songs to Kind of Blue’ path through modern jazz. In other words, whether I am listening to Grover Washington (smooth jazz) or Albert Ayler (avant-garde) or Return to Forever (fusion), within 3 songs on their ‘create a playlist based on …’ things I am back at ‘Kind of Blue’ or another classic mainstream jazz recording.

iTunes Radio is supported on iOS 7 devices as well as iTunes on Mac and Windows. Will there be a web-based player? We just don’t know that yet either.

There are two ways to gain a license to play music over the internet: government-standard ‘internet radio license fees’ and ‘direct deals’ with music companies. Pandora works similar to SiriusXM in that it can play what it wants but has to provide a tiny royalty to the rights holders (i.e. music companies). There has been a ton of activity through the years that boils down to this: Pandora is constantly losing money and crying to congress to cut royalties, while music companies complain that the fees are too low and lobby to get them increased to be more in line with ‘Direct Deals’ fees. Part of the deal ultimately also dictates that to keep fees low they need to behave more like terrestrial radio – no rewind or replay and very few skips per day.

‘Direct Deals’ are just what they sound like – a streaming company like Spotify or Slacker or Apple meets with Universal Music Group (or Warner or Sony) and they discuss how much each play will cost. They also negotiate skips and other playback features in the case of Radio, or album availability in the case of ‘On Demand’. In case it isn’t clear already, the fees to music publishers are higher with ‘Direct Deals’, and therefore the music companies are more willing to work with a company.

So now let’s look at some of the iTunes Radio winners and losers:

Winner: Spotify – basically, Spotify has an ‘on demand’ model that is largely untouched by iTunes Radio. Sure they offer a radio service, but it is secondary to their main attraction. I see Spotify suffering when it comes to negotiations with labels depending on the success of iTunes Radio, but otherwise doing fine.

Loser: Slacker – I love Slacker and it is my family’s ‘go to radio’. I predict that will stop the instant iTunes Radio is released, and that we will never use it again. They are not the leading company in any area, and therefore have a weak position with the music labels.

Winner: Twitter – did you notice that square in the middle of the curated channels was a ‘Trending on Twitter’ icon? So while it seems that Twitter Music is a flop, perhaps as an integral part of iTunes Radio they can win.

Winner: Music Companies – Apple is said to have given favorable terms to music companies in negotiations, and some ad-sharing revenues. This will make the music companies happy.

Loser: Pandora – just like any other ‘cooked in’ solution, Apple will immediately have ‘home field advantage’ on the millions of iOS devices and iTunes accounts. As my wife said – why pay $4 a month for something slightly better than what you can get for free in the normal app?

Winner: Customers – this looks great for competition, and when there is competition we all win. I mean, look at our mobile devices and the advances in operating systems technology! Going forward we are going to get more choice and more control.

Loser: Google – Google just launched a traditional on-demand music service with a $10 price and the most abysmal selection in all of streaming. Oh, and a laughable name. Just like everything else Google has done with music, it is ‘worst in class’, and shows that Google simply isn’t serious about this market, they just don’t want to miss out.

Winner: Artists (maybe) – it is clear that ‘direct deals’ pay artists better than traditional radio royalties, and supposedly Apple’s terms are pretty sweet. With a bigger pot, it is possible that more will trickle down to artists.

Loser: Other Streaming Companies – Facebook and Amazon haven’t really gone anywhere yet, and folks like Sony’s own music service and Rdio and others will become further marginalized by this.

Winner: Apple – Apple will retain customers looking elsewhere for streaming radio, get more exclusives like the Daft Punk stream (which translate directly into sales), and ultimately make loads of money from this while absorbing loads of customer data to help drive sales and further product development. Win, win, win.

Of course none of this is set in stone – for all we know iTunes Radio could be the next Ping or Google Buzz. But that seems unlikely – it is built on too solid a foundation. I am fully ready to be incorrect, but I still see this causing massive ripples through the music publishing and internet streaming industries.

What do you think will happen?