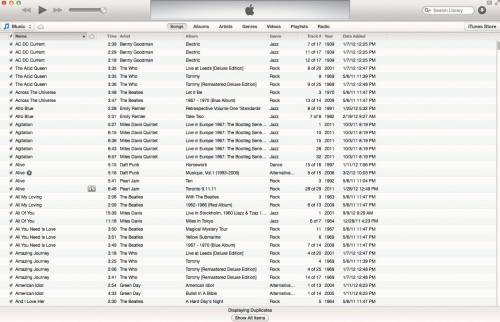 If you are like me, and you have been dumping music into iTunes for over a decade across multiple computers and mobile devices, chances are you have imported the same music more than once. And perhaps you did it once from CD and another time from a backup after altering MP3 tags (I used to love having song numbers preceding the title). However it happened, chances are that you have duplicate music spread out in your iTunes library.

In theory iTunes has a ‘Show Duplicate Items’ menu selection under the View menu. I say ‘in theory’ because what gets labelled as a ‘duplicate’ is dubious at best!

What can make matters worse is when you buy a box set or other collection of music. For example, I have several ‘Complete Miles Davis Sessions’ recordings (Bitches Brew, In a Silent Way, On the Corner, Cellar Door, etc) as well as things like the ‘Complete Columbia Recordings’, and who knows how many other collected sets of music. Collections cause issues because you might have an identical song from five albums but identified slightly differently with song times that vary just enough to seem distinct. Also, during specific periods (as captured most recently on the first two ‘Bootleg Sessions’ releases) Miles used a fairly standardized set-list, meaning that I have about 8 variations of ‘Agitation’ from 1967-1968, and even more variations of ‘Directions’ from 1969-1971.

The image at the top shows what happened when I selected ‘Show Duplicate Items’ from the view menu. You might be able to see that the scroll bar on the right is quite small – there are more than 1300 songs listed! Amongst them are true duplicates as well as different versions and things that I have no clue WHY they are labelled as duplicates! But it turns out Apple has a better way: 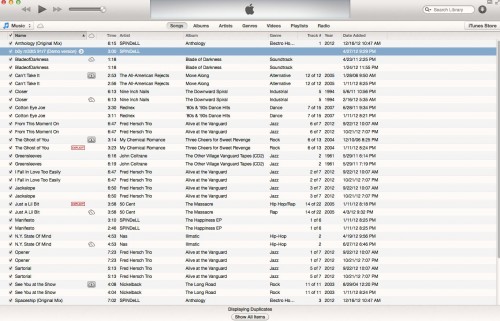 This image is what happens when you hold down the Alt/Option key while selecting the View menu – you get a ‘Show Exact Duplicate Items’ menu option to choose. By selecting that, the second image is the result. There were only a hundred or so true duplicates remaining at this point, and I was able to quickly clear things up – as expected most were due to re-importing things I thought weren’t in my library.

What is missing? Well, for something like The Who’s Tommy, where I have the original album rip (I have first-edition vinyl from 1969) as well as the digital ‘deluxe remaster’ that doesn’t show up as an ‘exact’ duplicate. And there are other things such as when the exact same song is one more than one album; it only shows up on the Duplicates and not as an Exact Duplicate. But that is a minor hassle, now that I’ve got the easy stuff out of the way.

How do you keep your iTunes under control? Have you found the ‘Exact Duplicates’ command?