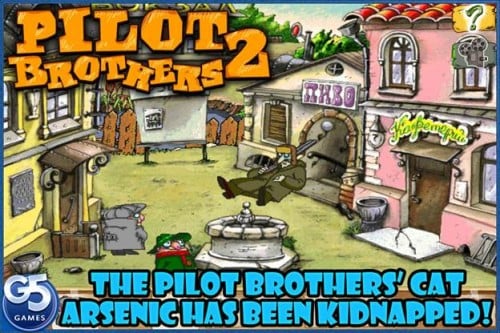 I have to confess that I didn’t really ‘get’ the original Pilot Brothers game, but by the end I enjoyed myself and was able to recommend the game to others. I still never really followed what was going on, or the reasoning behind the different capabilities for each brother, but the charm of the presentation and the overall fun and challenge won me over. Now that Pilot Brothers 2 is out, will I enjoy it as much? 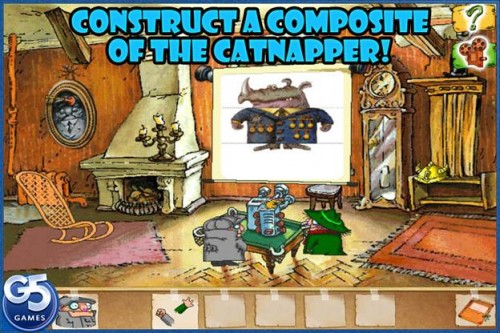 Major features: As a reminder, while the Pilot Brothers are not well-known in the U.S., they have quite a following in Russia. As a result they need to win us over without any background. The pair of brothers fall into the stereotypical combo that goes all the way back to even before Abbot and Costello – you have the smart and sensible ‘Chief’, and the bungling yet effective ‘Colleague’. And once again you have a mystery to catch a thief – only this time it is personal: while the brothers are playing a bizarre hybrid of chess and checkers, someone steals their cat!

The gameplay mechanics are fairly typical for the genre – point and click to complete actions. But here you have two characters, and need to swap which one is in control to get things done. Very few things are obvious as you proceed, but there are a few such as elements based on strength or dexterity, but other combinations require you to solve something with Chief, then DO something with Colleague and so on. Having arcade-style mini-games interspersed with the adventure was a change of pace from most genre games.

The visual style is … quirky, just like the first game. It is very much a cartoon game, with a rather simplistic artistic style. The game uses the Retina display in terms of resolution and to make things distinct and visible – but I would never call the graphics ‘gorgeous’. Even on the iPad Mini it looks ‘low-res’. 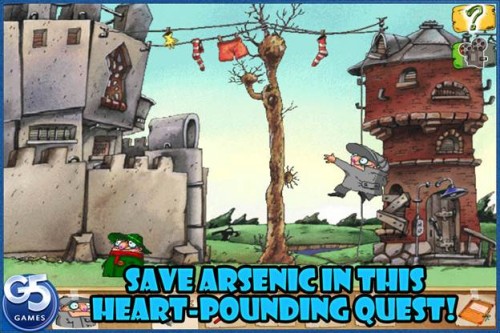 Let me frame the guidance you get figuring things out – the tutorial consists of being told to pick up cheese in a shop, and then to place it on a counter … and then ‘good luck’! You immediately need the hint system, and after a few times hoping for the clues to make sense, you recall that you came here because of the pursuit of a witness to the crime!

Would use again/recommend?: Not really! I hoped I would like this based on the first game, but I found there to be less story, less direction, and less sense to the puzzles and approaches to getting stuff done. I felt like the hint button was the most tapped area in the game, which for me made it a frustrating experience.

Suggested changes/wish list for updates: There is nothing they could do .