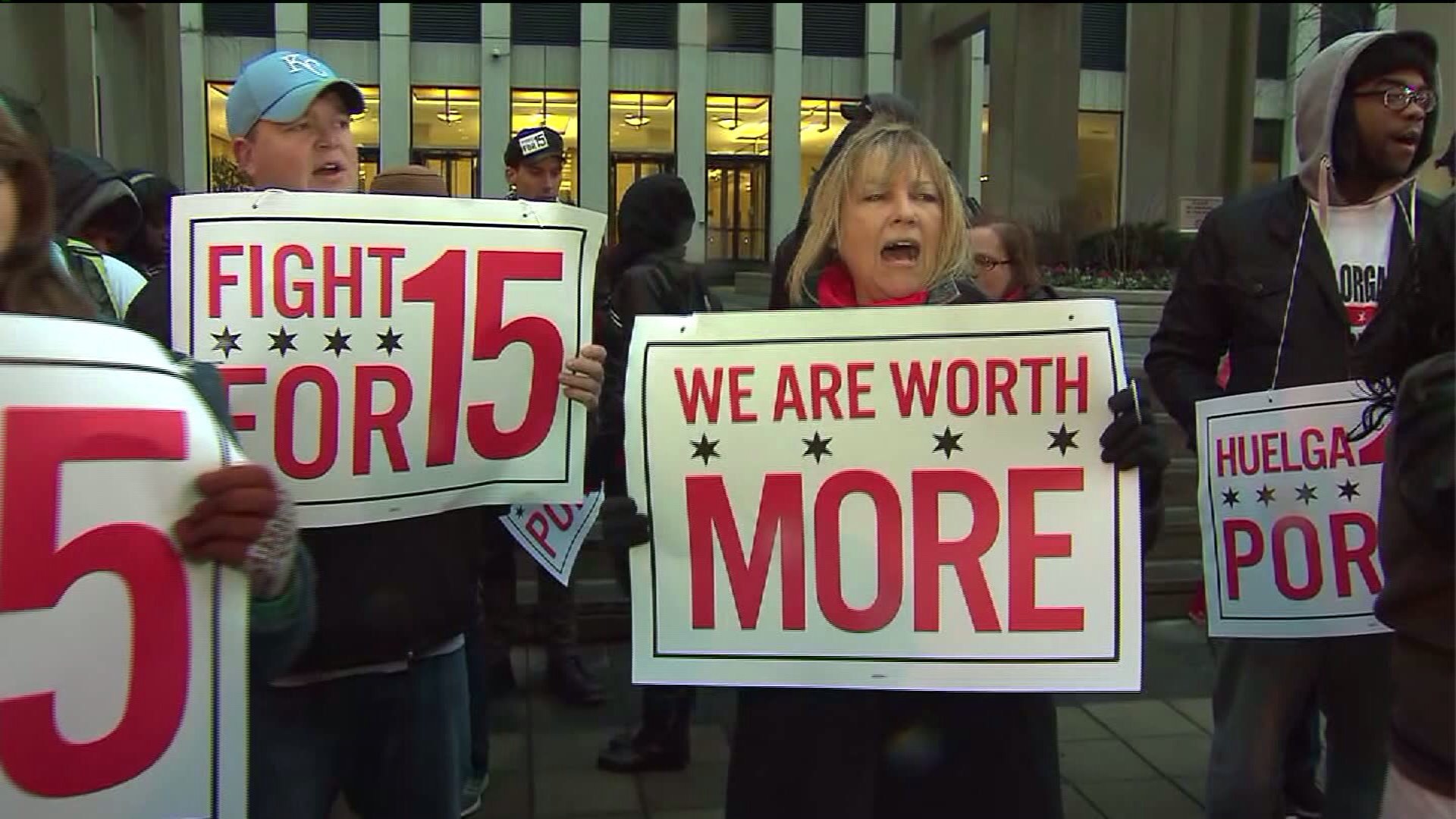 What did your first job pay? I vaguely remember my first “real” job (i.e., not babysitting) at Borders during summer break from college, where I was thrilled to be making $6.25ish per hour. Fast forward to when I worked as a supervisor for Borders, post-college, with a degree, where I started at $8.75 an hour. Even with roommates, it was tough to stretch that every two weeks. So I have a lot of sympathy for the current fast food workers’ strike, where they’re fighting for a raise, specifically to a significant level above the current average rate of $7.25 per hour. The major objection to these requests is that the companies in question simply can’t raise wages without raising prices … an objection that Forbes is reporting may not necessarily be true.

Forbes has an excellent summary of the analysis done by a research assistant at the University of Kansas, who determined that if the entire cost of a wage increase to $15 was passed to the consumer, the “dollar menu” would become the $1.17 menu. The rest of the items McDonald’s sells would also cost a bit more, but nothing would increase by even a full dollar. In other words, the workers would double their salaries, and the average person would only be out a few extra cents. All that assumes, of course, that McDonald’s passed the cost onto the consumer entirely, and didn’t shave a few cents off various costs to make up the difference. The analysis also raised everyone’s salaries, from the line workers to the CEO.

So why don’t companies raise wages? I’ve heard many arguments, mainly centered around concerns regarding margins and profits. After all, if you raise workers’ salaries, and then the economy tanks, you’ve left less wiggle room to make up that extra cost. On the other hand, if you pay people a living wage, you put more money back into the economy, which, if you’re a McDonald’s, or a Wal-Mart, or a grocery store, you’re likely to see a bigger benefit. That extra money you’re paying to workers is going to come back in the form of workers shopping in those same stores for staples like food. And it’s not impossible…Costco has long been known for their excellent pay and employee benefits AND their ability to run a profitable business while doing so.

I also think it’s vitally important to put “$7.25 an hour” into context. At $7.25 per hour, assuming a 40 hour work week, 52 weeks per year, no vacations and no overtime, you’re making a grand total of $15,080 per year. At $8.75 per hour, that yearly pay jumps to $18,200 per year. $15 per hour is a very big jump, pushing the annual salary to $31,200 per year. $7.25 per hour also puts a single individual below the poverty line and eligible for food stamps. That’s for a household of one…as you can see from the USDA chart, even making a bit more ($8.75 per hour) pushes anyone other than a single person into eligibility for government assistance. This wouldn’t be fixed entirely with better wages for workers, but it would certainly mitigate some of the strain on workers and government assistance programs. And remember, that’s just addressing the cost of food. Add in rent ($804 per month on average in America) and the cost of either public transport or a car, even without health benefits you can’t stretch that $7.25 per hour very far. The Consumerist did an excellent takedown of McDonald’s “budget” they helpfully created for their employees, which is even more laughable when you really sit down and do the math on wages.

It’s easy to be dismissive of people who work in retail or food service and not care how much they make. But I can almost guarantee that if you’ve spent any serious time working in a service industry, you understand why these wages significantly underpay employees. I spent three years in management for Borders, and I barely made more than $30,000 per year, in a major metropolitan area. Needless to say, my employees didn’t get paid terribly well either. For college kids looking for beer money it was no big deal, but there were people who worked for us who had families depending on their income. They worked full-time for less than $2,000 a month. We were there on Christmas Eve for the last-minute shoppers. When everyone else was out enjoying shopping on Black Friday, we were open and working. Fireworks on 4th of July? That last beach day during Labor Day? You guessed it…

Retail and food service aren’t easy. Very few people are working at McDonald’s because it seemed like easy money, and when you look at what $7.25 an hour translates to in monthly and annual pay, it’s downright insulting. The analysis Forbes found is an amazing starting point to opening up the conversation further; how much are we, as consumers, willing to pay extra to ensure the person making our burger can afford one of their own?