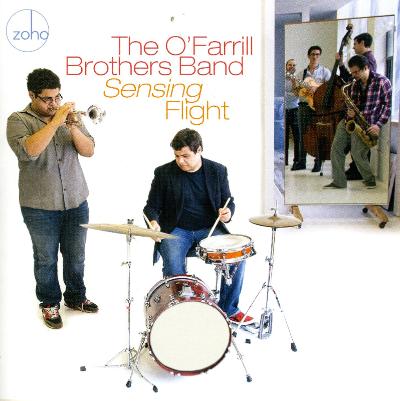 The O’Farrill Brothers remind me of seeing Harrison / Blanchard in New York City and buying their debut CD ‘Nascence’ – there are interesting songs, a certain rawness and rough edges, an abundance of talent, and apparent influences on display. And like ‘Nascence’, I expect greater and more mature work in the future, but that doesn’t diminish this fun and intriguing recording!

The O Farrill Brothers display their astonishing instrumental hard bop virtuosity and a distinctive, coherent ensemble sound with a musical maturity well beyond their young years. Features six Adam O Farrill originals, one composition by saxophonist Livio Almeida, and two modern jazz classics by Carla Bley and Billy Strayhorn. Eighteen-year-old trumpeter Adam already has an impressive musical resume, having played with worldclass musicians such as Stefon Harris, Benny Golson, DJ Logic, Kenny Burrell, James Moody, and with Esperanza Spalding in the live broadcast of the 2011 Grammy® Awards. Older brother Zack (21) is a multi-faceted drummer with a distinctive style and experience in many genres, from hip-hop to Brazilian jazz. In addition to leading their own band, both Adam and Zack frequently perform in the various groups of their father, Arturo. The new pianist in the band is Adam Kromelow, whose 2012 debut ZOHO release Youngblood was produced by Grammy®-winning artist/producer Arturo O Farrill, and received rave reviews in the jazz press.

The term ‘young lions’ was used to describe Wynton and Branford Marsalis coming up in Art Blakey’s Jazz Messengers, who were then replaced by Terence Blanchard and Donald Harrison in similar roles with similar accolades. There are frequently young artists called ‘the next young lions’, but too often the raw talent fails to fully gel and mature and we are left with solid musicians who function in mostly supporting roles.

With their second album, the O’Farrill brothers have stepped out of the shadows of their father and grandfather and emerged as solid musicians who are able to carry an album based on their skills. They are joined by Livio Almeida on tenor sax, Gabe Schnider on guitar, Adan Kromelow on piano and Raviv Markovitz on bass. The group plays extremely well together – I always worry in this setting about the guitar and piano stepping on each other harmonically, but here they form a great complement that never becomes too dense.

The album is easily categorized as ‘mainstream acoustic jazz’, and without any negative connotations. The format works very well for the compositions, mostly from Adam O’Farrill. There are interesting themes and melodies, great counterpoint, and plenty of room for improvisation. One of the most interesting things for me was the non-standard interplay of trumpet and guitar, then piano and saxophone. In most standard settings the trumpet and sax do solo exchanges and piano and guitar trade off on songs. This unique way of approaching things kept it more interesting for me and opened up the setting.

Of course as young musicians you still hear influences – I can hear Wayne Shorter in Livio Almeida’s composition ‘Action and Reaction’, yet it is still an interesting song that is modern in how it looks at those standards. On ‘Mind Troubles’, I was grooving along listening to Gabe Schnider before I realized how much he reminded me of Jim Hall from the Sunny Rollins early 60s recordings. Again, not anything that takes away from the proceedings, just an observation.

‘Quick Hit’ Song: “Wrong Key Donkey” – I have a thing for Carla Bley compositions, and this is a gorgeous rendition of a fun and funky tune. Bley’s songs – similar to Monk in this regard – never let you settle into your expectations, and the band does a great job working to create a unique charm and style through Bley’s harmonies and melodies. Great playing keeps the tension high throughout.

Would I recommend?: Absolutely! Overall I greatly enjoyed listening to ‘Sensing Flight’, and it was easily accessible for my family to enjoy around the house and in the car. There is a solid quality to the compositions, communication and improvisation that makes this an easy recommendation.

Suggested audience: Fans of mainstream jazz, and anyone interested in hearing some of the brightest ‘rising stars’ of jazz.

Here is a video of the group playing live: