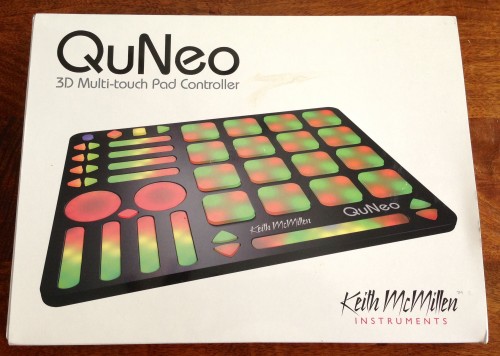 Being a Kickstarter darling has its ups and downs. QuNeo earned more than 10 times its funding goal of $15,000 then struggled through manufacturing problems, partner changes, and delays before finally launching. The end result shows that being patient and steadfast paid off with a product that is iPad compatible, high quality, affordable, and totally musical!

QuNeo is the next generation of pad controller. As small as an iPad and more powerful than any other MIDI controller you’ve ever played, QuNeo makes beats, launches clips, remixes and reinvents your musical world. 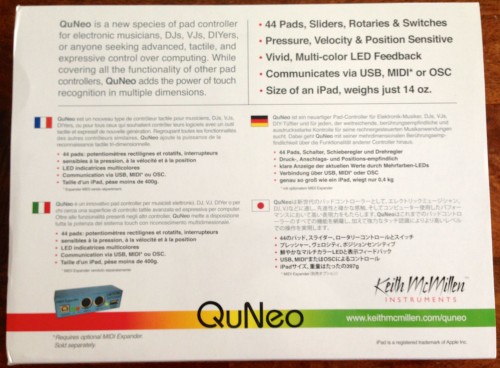 The QuNeo is not the first pad controller – there is Native Instruments Maschine, and my son already has the Novation LaunchPad; both are great examples of what would be considered ‘current generation’ controllers. QuNeo calls itself the ‘next generation’, which is pretty accurate. Whereas earlier touchpads offered a basic touch response, and ‘second generation’ offered some amount of velocity sensitivity to control dynamics, the QuNeo offers ‘3D’ control – which I will explain later.

In terms of packaging, the QuNeo is small and light – barely larger than an original iPad, the QuNeo weighs just 14 ounces and is USB-powered to make it extremely portable. The packaging seems very durable – it isn’t ‘rugged’, but is on par with most musical instruments in terms of being able to take a reasonable amount of punishment.

There are three important musical elements – the control pads, the software and the interface. Let’s take a look at each: 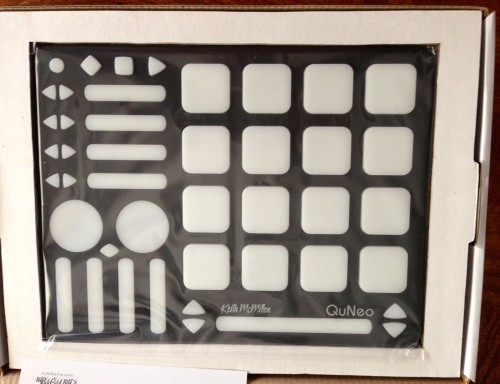 There are a few super-cool things about the QuNeo pads. The first and most obvious are the light-up pads with multiple colors that come from the 251 LEDs (yes, really!) inside of the pads.

The second cool thing is that rather than the old pressure sensitive pads that activated physical switches on a circuit board, the QuNeo pads are closer to touchscreens in terms of technology. I contrast this with my M-Audio Axion X25-Pro, which has physical pads that provide an output proportional to how hard you press – but it is non-trivial just to make the contact, so getting even volume is a pain. Controlling dynamics on the QuNeo is a breeze.

Finally, the 3D aspect – velocity, pressure and location. This is what makes the QuNeo amazing – you would expect velocity, that is just basic dynamics control. Pressure sensitivity gives you a secondary dynamic – such as after-touch on a keyboard, patch-switchpoints, effects gating, and so on. This is something you would also expect on a decent keyboard controller.

But the location element adds another dimension, if you pardon the pun. The pads track the XY location and can be mapped to change outputs based on that location. It is analogous to the Korg KAOSS pad in that you can change a filter cutoff and resonance on two axes simply by moving around a pad. And there are 16 of these pads. Another application – if you are laying down a drum track and have a cymbal or hi-hat mapped to a pad, you can change between the metallic edge tone and bell-like center tone by altering your XY position. 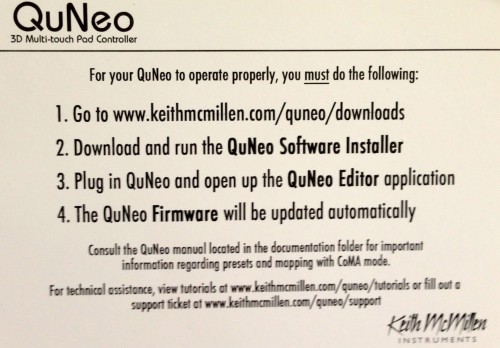 Functionally all you get with the QuNeo is a bunch of touch-sensitive pads on a portable board. But inside that board is memory with a number of presets, flash storage that you can program, software to convert your taps and beats into signals, and an extensive MIDI control system.

MIDI control and conversion is critical, because when it comes down to it, all QuNeo is doing is streaming CC (continuous controller) messages mapped to the various pads. MIDI CC was an early extension to the specification that allowed for more expressive control over sounds in the 80s, but at the expense of greater bandwidth consumption. It has been a very long time since that was a concern, and USB makes the ability to stream this volume of data nearly trivial. Keith McMillen offers a separate MIDI interface to allow you to route the QuNeo output to other instruments.

Presets are an easy way to get started with using QuNeo with a large number of apps on the Mac, PC or iPad. But as you work with the system more and more you will likely discover that you want to do things a bit differently. That makes the ability to edit and save presets desirable. QuNeo has flash memory so you can update the system firmware as well as uploading new presets and templates.

An example of how critical all of this stuff can be is found in the latest firmware update: v1.2.3 included the new ‘iPad mode’, which tweaked the visual feedback system (lower LED power) to consume less power so it could run off of the iPad connection. Prior to this you needed to use a special connector to provide external power.

The update also optimized the system for a faster scan rate. What that means is that signals coming from all of the pads are captured more rapidly so that changes are rapidly reflected in the sounds. Prior to this there was a certain amount of ‘zippering’ for certain sounds, a term used to reflect a stair-step change in sound due to inadequate sample rate. 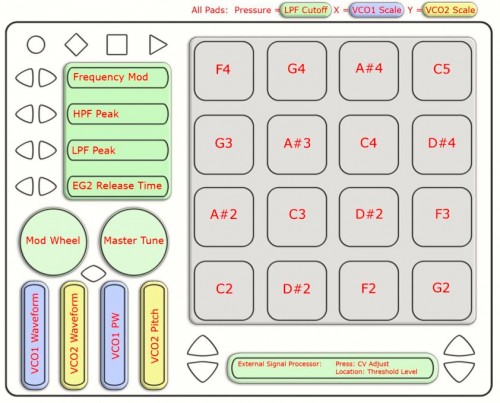 Using the QuNeo as a drum machine controller is great – and in my opinion it is worth buying is that is ALL you do – but for many others people, the attraction of the QuNeo is as a multi-purpose controller. This is the reason there are a number of strip controllers, arrows, and virtual dials in addition to the 16 pad controls. I have heard some complaints that the lack of a physical job wheel or sliders limits the usefulness of the system, but I don’t agree. As I will show in my hands-on review, there is plenty of granularity and feedback to the system as it stands to use it as a controller.

In our house we have two people whose musical explorations include the keyboard – myself as a mostly jazz guy, and my son the dubstep-electro producer. Each of us found loads of utility in the QuNeo – myself tweaking sounds in the Korg iMS-20 app, and my son controlling Ableton Live on his PC. With the breadth of controls, the feedback, and most importantly the huge expressiveness of the XY control in the pads, QuNeo has earned a place in our setups. In fact, my son is planning to use it on a DJ job he is doing soon! Definitely check it out – at the price offered, QuNeo provides loads of options and a solid setup.

Here is a demo video: