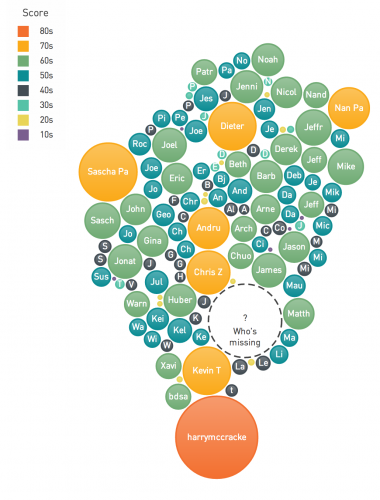 A Klout cluster of influence

People are such competitive creatures, and bloggers can be some of the worst; Klout is a company that feeds that beast. Touting itself as “The Standard for Influence”, Klout measures the reach of everyone who is active in social media. What’s your Klout score? Should it even matter? Does it matter to you? Of course it does; you’re human!

Klout preys upon people’s desire to feel or at least be perceived as influential or important, and it gives users a tangible score that can be used for comparison against others in their field (or in other non-related fields). Klout offers instant validation (or despair) for those who are keeping up with it, and it integrates so nicely with social networks such as Twitter and 4Square, that users can immerse themselves competition without necessarily meaning to whenever they are replying to a friends tweet or checking in to a favorite venue.

My Klout score is in the mid-60s, but so what? Does that mean I’m more popular, influential, or knowledgable than someone with a score in the 40s? It certainly seems to suggest that, but then you need to ask the next question … what is that score based upon? It’s not as if they draw information from every single social media source available. Rather, Klout’s algorithm determines which social media sources merit their attention, and then they base their scores off of that.

But there’s more. Only one person can be connected to any given network. That may seem fine on the surface, but here’s an example of why it doesn’t work: our Gear Diary YouTube channel has content created by myself, Dan, Mike and others. Our Gear Diary Facebook page is maintained by Dan and me, and we share Pinterest Boards where we pin Gear Diary photos. Only one of us is “allowed” to be connected to each channel, even though we collaborate on the content.

And then there’s the rapid rise and fall of some numbers. For example, Dan shared with me that when we were running a contest that included the need for people to tweet a phrase that included both his and my Twitter handles, his score jumped by six or seven points in two days … but then in the three weeks after that went back to where it had been. So is he less popular now than he was then? Has his influence diminished in the three weeks since the contest ended? Or was it the other way around; did his influence rise so rapidly just because we were giving stuff away? It’s all smoke and mirrors, and there’s seemingly little to no substance behind what Klout are doing.

90 day highs and lows as seen on Klout

Then there’s the ability to give a +K to people. If I went on a campaign and asked people to give a +K to anyone connected with Gear Diary, then everybody’s numbers would go up. But it doesn’t reflect an increase in our influence, it simply reflects my taking advantage of some connections I have to artificially inflate numbers that don’t matter anyway. But then, who wouldn’t want to see a little +K given by one of their peers next to their topics of influence, and who doesn’t appreciate the instant gratification of perceived peer approval? We are social creatures, and we are conditioned from childhood to seek positive reinforcement and praise from those we admire. Klout seems to offer a way to rate ourselves, and perks have even been given to those with high enough rankings. But from the beginning there has been controversy about Klout’s methods.

In late 2011, Klout was criticised because they measured Justin Bieber’s influence with a perfect score of 100 while President Obama had a score of … 58? Klout’s response was that they measure online influence rather than real world influence, and that Justin Bieber was doing a better job of interacting with social media than the president. Reacting to the criticism, Klout added measurement algorithms that took into consideration social networks beyond Twitter, Facebook, LinkedIn, Foursquare, and Google, which were all it had previously been measuring.

Perhaps part of what made Klout so intriguing to many was the controversy stirred up by its inconsistent scoring, but for much of 2013, Klout has been quiet. I haven’t heard very many people talking about it, and other than the occasional +K passed given when the mood strikes, it seems that many of my friends have stopped bothering with it. To a large extent, the “popularity perks” have even dried up.

Maybe, just maybe, we are tired of being judged. Maybe people have finally realized that a self-professed “standard for influence” has little to no influence.