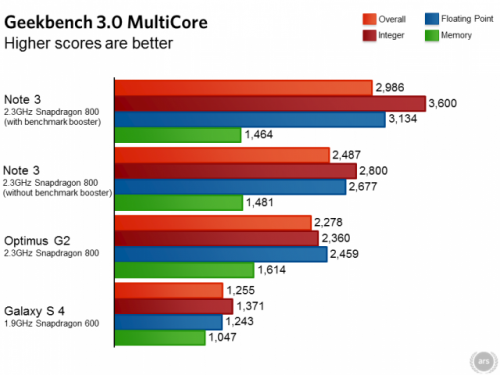 For some people benchmarks don’t matter … and for others they are ALL that matter. For hardware companies, benchmarks provide an internal performance metric and external bragging rights. But new evidence shows that Samsung tweaked their Galaxy Note 3 to perform better on benchmarks than in ‘normal usage’. This isn’t the first time they’ve done this, either!

According to an article at ArsTechnica, Samsung tweaked their CPU performance when a known benchmark app was run, so it would give better than expected results. This was noticed when the Galaxy Note 3 outperformed the LG G2 — despite the two sharing nearly identical hardware. Samsung got caught doing this with the Galaxy S4 and even claimed it benefitted other apps like games, despite evidence that wasn’t true.

What do you think? Should companies be gaming benchmarks?