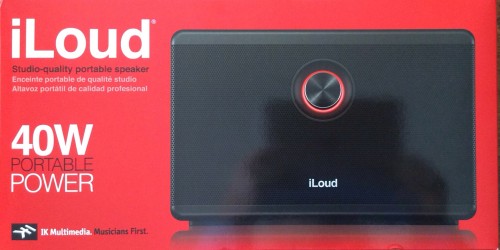 Earlier today I posted about IK Multimedia’s new iLoud Bluetooth speaker system. This is their entry into the portable speaker market, but with a twist – rather than just releasing yet-another Bluetooth speaker, they designed an audio system with musicians in mind. I have had a chance for a first look, and it is awesome. Check out my first-impressions video!

The main features highlighted by IK multimedia include:
? Loud and Clear
? Ultra-Portability
? Wired and Wireless
? Plug and Play Convenience

What impressed me from the start was how portable and light iLoud was … well, honestly that was the SECOND thing that impressed me. If it wasn’t for the tremendous sound coming out of the speaker, nothing else would have mattered.

But once I heard iLoud in action, I noticed everything else. The ease of connecting my iPad using the 3.5mm cable, or plugging in a guitar directly to the 1/4″ jack; the ease of pairing devices to iLoud over Bluetooth made getting started easy, and allowed all of us to take turns sharing our music.

Since first charging iLoud I haven’t plugged it back in – there are warning light patterns on the front that tell you when you get close to running out of battery – but after at least a dozen hours of use I haven’t seen anything yet.

You can head to the IK Multimedia iLoud page for more information or to buy your own.

Here is my initial impressions video – which sadly fails to truly capture the audio power and bass response of the system. You can look for a more complete review coming soon!