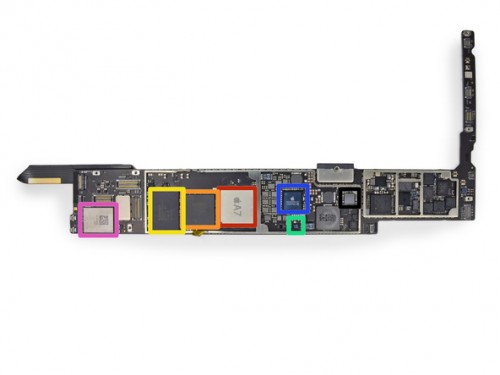 I love the iPad Air – after a year using the iPad Mini, I was ready for the 9.7″ screen, Retina resolution, the A7 processor power, and getting back to LTE. I was bumping up against the iPad Mini limitations, particularly for gaming and music production. But for all the iPad Air power, I’ve found a new limitation: 1GB RAM.

To put it into context, a 2GB chip compared to a 1GB chip adds no more space, weight, heat, doesn’t change layout, and would cost less than $10.

The functional role of RAM compared to flash storage is important. Apple specifies the storage capacity of their devices: 16GB, 32GB, 64GB and 128GB – and the role is pretty clear to most people – you can fit more songs / movies / eBooks / apps / pictures.

But with RAM, it is less clear. In theory, an OS uses RAM to store apps, and the app uses RAM to store data, graphics, variables and so on. Older Mac users will remember how System 7 did ‘multitasking’ by allocating chunks of RAM per application. In a modern OS the system manages RAM allocation – and most recently Apple’s Mavericks has shown RAM compression as a technique to further optimize usage and free more RAM for system use.

But regardless of streamlining and optimization, RAM remains a physical and finite quantity, and when it is gone it is gone. So you cannot load a 2GB RAW image fully into 1GB of RAM. This means that the system will load as much as possible, and the rest has to stream from storage.

But what happens when the system is operating and runs out of RAM? Generally it will gracefully reallocate from low-priority or lesser-used data, which will be ‘flushed’. Occasionally it will crash. But regardless, there is an immediate impact which may or may not be noticeable.

My only real-world example so far is Safari: I have had a few occasions already where I tried to copy sections of a review I had written for Gear Diary into a web-forum discussion regarding the games and apps. And in each case, I have found that Safari ends up reloading tabs so I can never do a multi-quote response. And this is with no more than 3 tabs open.

Games: in the PC gaming world, having your levels constantly accessing the hard drive is a performance killer; the same is true for iOS. Last year we saw games stop really moving forward. Why? Because the iPad Mini lowered the ‘spec bar’. Now we have amazing screens and A7 chipsets, yet the forward progress will be AGAIN limited. Why? Because high-res textures take space – and limited memory limits your overall zone loads …and therefore limits what developers can do.

Music: this is my biggest concern – because now we can have 32 tracks in Garageband, 48 tracks in Auria, and then mult-process using AudioBus and Apple’s new audio inter-app communications system … it seems like the challenges in maintaining control of the system memory pool will be considerable.

But this doesn’t mean that all hope is lost – I haven’t managed to make a game crash or kill an audio process … and I haven’t even begun to get things pushing as hard as demonstrated in this video:

So maybe there is no real reason for concern, but I still wish Apple had made the <$10 choice to include more RAM. Heck, even if they only did it for the 128GB version, I would have found that acceptable – because at least it would give users the option. As it is, we have no choice.