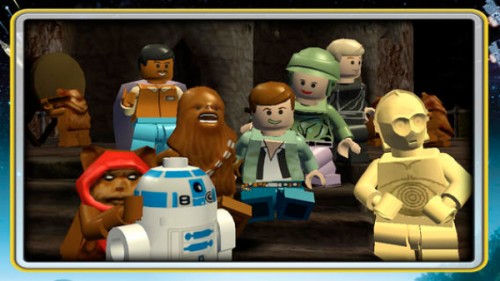 I was a huge fan of LEGO Star Wars and LEGO Star Wars II way back in 2005 and 2006 when they were released and a fan of the subsequent 2007 ‘Complete Saga’ release. The PC & Mac versions arrived in 2009 and 2010, and now have landed on the iTunes App Store as a universal iPhone/iPad release.

It is free with in-app purchases, and it is STILL a blast!

From my review of LEGO Star Wars II:
If you can’t understand why last year’s LEGO Star Wars was one of the most entertaining games of the year, I’m afraid I can’t help you. If you avoided it simply out of loathing for the prequel movies, then shame on you. Now your salvation is at hand. LEGO Star Wars II: The Original Trilogy is every bit as fun as the first LEGO Star Wars, adds a few new twists, and is a wonderfully compelling experience.

The initial download giving you Episode I is free, with in-app purchases of $4.99 to complete the prequel trilogy and $14.99 for the full collection including all extras and bonus material.

Here is the trailer from the original release: