UbiSoft’s Just Dance 2014 lets players use the PlayStation 4 camera or PS Move controllers for another memorable interactive experience in this popular game series. Have fun and stay fit with great music from various genres and time periods. Rhythm helps, but learning is just as fun in this fifth installment in the main game series. 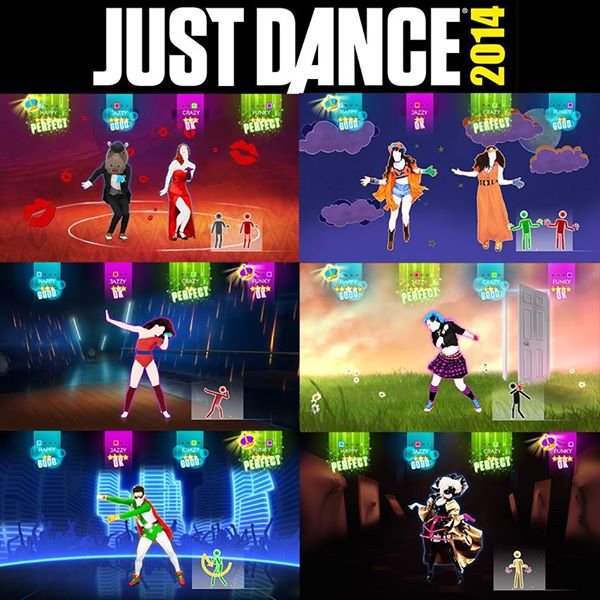 The party is back! Just Dance 2014 – the sequel to Just Dance 4, the world’s #1 selling dance game – is bringing all new moves with breakthrough features for every motion control platform and over 40 of the hottest tracks and dances. Dance to current pop hits or celebrate with legendary classics – then take the fun to another level by playing with anyone anywhere in the world, leading back-up dancers, or creating customized Just Sweat experiences.

The hottest songs & dance moves! With Just Dance 2014’s fresh list of hot tracks, you control the party! Get friends and family moving with Pitbull ft. Christina Aguilera’s “Feel This Moment,” Psy’s “Gentleman,” or One Direction’s “Kiss You.” Celebrate the throwbacks with legendary songs like Gloria Gaynor’s “I Will Survive.”

New modes & features to start any party! Just Dance 2014 takes the fun to another level this year with all new ways to create the best party ever! Own the spotlight and lead back-up dancers with the new On Stage Mode, dance with anyone anywhere in the world with World Dance Floor, work out to customized Just Sweat experiences on any song– and much more! Bring home the ultimate party starter and join in the fun!

More game modes and songs boost Just Dance 2014 to a nicely entertaining level. Players choose the PS4 camera or PS Move controller, make their profile(s), and choose the difficulty (easy, medium, hard, and hardest). Competitive players should lean towards the PS Move use since the camera will occasionally track the wrong player in multiplayer modes. 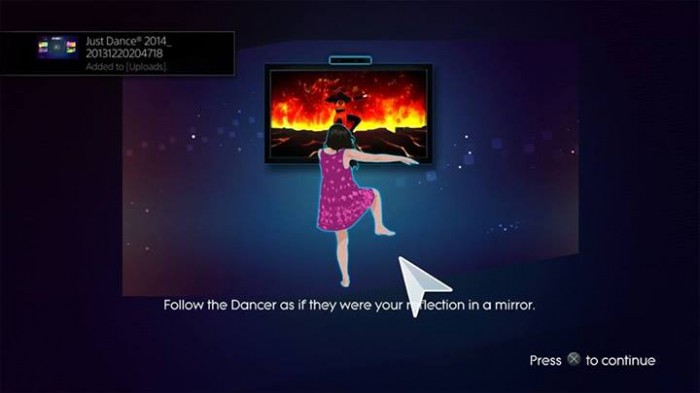 Players can emulate moves using their own style or learn to incorporate successful moves using the game’s motion detection systems. The PlayStation 4 controller touchpad also functions as a laptop-like interface where dragging your finger across the pad and pushing down on the touchpad like a button makes selections simple.

Just Dance 2014 also incorporates more notices usually relating to progression achievements (e.g. gold stars) while also more party aspects like a time countdown to “happy hour”, which occurs once every 24 hours and appears in the upper right hand corner on the main screen. It’s a great way to bolster the Just Dance community and make players feel like there is always something going on even when they are not playing. 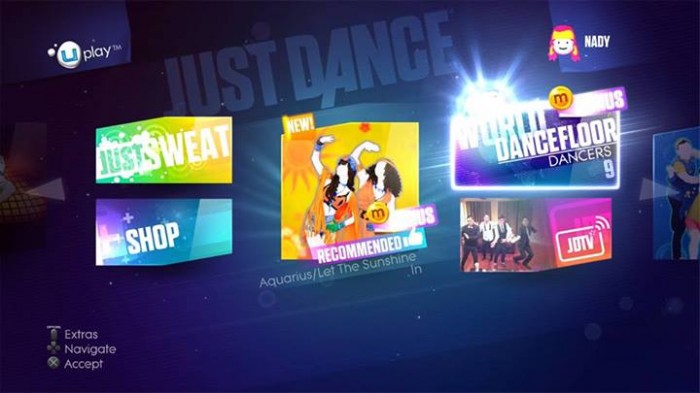 Players can navigate to each side from the main screen for more modes, recommendations, and individual dance song experiences. 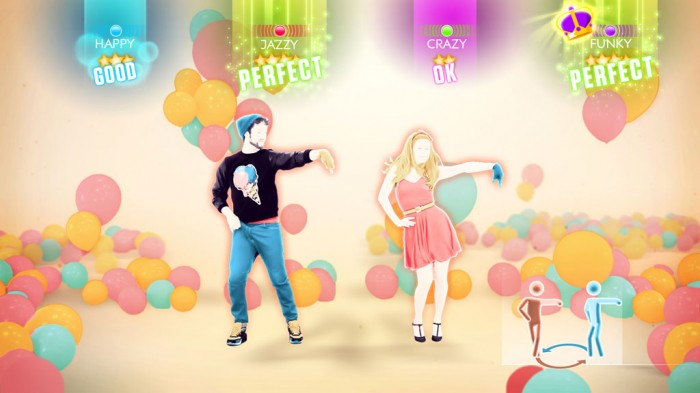 Playing with friends is so much fun and playing with the world online widens the options…just make sure you have an optimal web connection. Fun also combines with fitness in the Just Sweat mode, which tracks calories burned. Players can also customize a workout and check statistics. 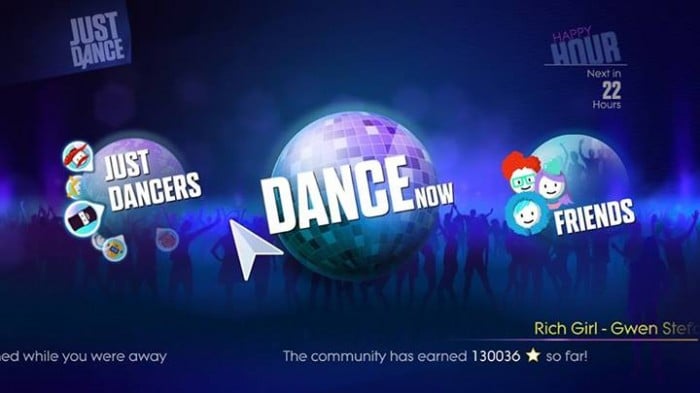 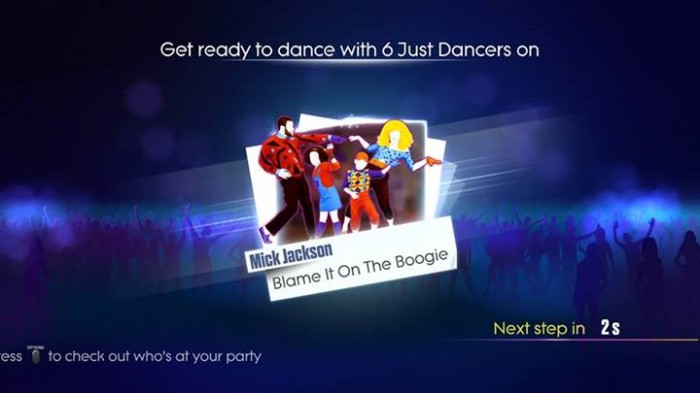 The new On Stage mode puts the spotlight on one player with two other players playing backup. Get combative in the competitive Battle mode with a versus format between two different songs for three rounds. Players can battle real players or AI players.

The Mash-Up mode features 32 songs and are purchased using mojo points in the in-game shop. Players can dance against a friend’s previously played “ghost” animation to see how they measure up. Gold moves are back after their absence from Just Dance 4. The classic free-dance mode makes a nice practice mode for beginners.

Not enough? Take a break and try the karaoke mode using a microphone to earn points for hitting the right notes while not losing any for missing notes.

One more mode – it’s a PS4 exclusive (also to the Xbox One). Just Dance DJ Mode lets players control the beats among songs. Players can also use this DJ mode in Endless Party mode.

Got the moves? Share them on Facebook, Twitter or the Just Dance AutoDance network (a.k.a. JDTV), an in-game social media channel for hours of entertaining Just Dance 2014 gameplay footage from players all over the world.

Also available on PlayStation 3, Wii, Wii U (also with Nintendo Wii U bundle with Remote Plus controller), Xbox 360, and Xbox One. The Party Master mode (upgraded puppet master mode version) exclusively available in the Wii U, Xbox 360 and Xbox One version lets one player control rules, settings, songs, and dances for other players.